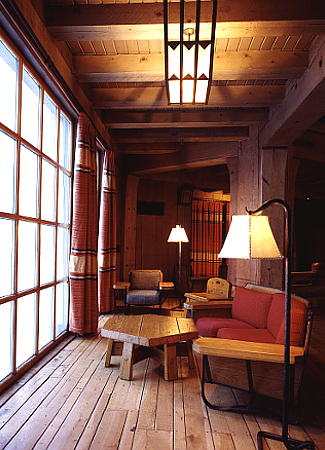 Okay, you're right. Didn't we just do a large resort hotel built in the mountains as a lesser known history subject? Yes, ... that was the Mohonk Mountain House of New York. But when you can combine the Works Progress Administration and Oregon nature splendor in a structure built during the depression, it's hard to bypass. So this month, we're combining the outdoors pleasures of hiking, fishing, skiing, and more sixty miles east of Portland at Mount Hood National Forest, and a stay, or at least visit, to the splendid, and gorgeous Timberline Lodge. Of course, while this lodge may be lesser known to many, it's certainly not to the amazing four million visitors who come to the Mount Hood National Forest every year; two million of them make it to the lodge as well. Photo above: Timberline Lodge, Historic American Buildings Survey. Courtesy Library of Congress. 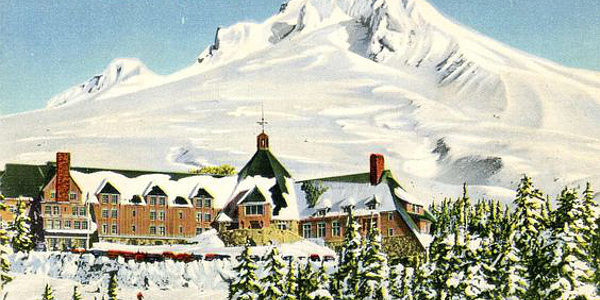 It's funny how you can be so well known and so little known at the same time, but, if you asked about Mount Hood's gem of a lodge and ski area in the Northeast or Southeast United States, there'd be a lot of hah. That hah would change dramatically after they'd visit. Built in 1937 during the Great Depression by Roosevelt's Work Progress Association, Timberline Lodge rose on the southern slope of Mount Hood, nearly six thousand feet (5,960 to be exact) above the sea and five thousand feet below Mount Hood's tip at 11,245 feet. The lodge itself is fifty-five thousand square feet big, and that doesn't include a couple very unique other places to stay there, including a small group lodge called Silcox Hut and condos in the Government Camp area.

There was already a lodge on the east side of Mount Hood, Cloud Cap Inn, built in 1889. A new highway had been built giving additional access in 1925; a second hotel built to stimulate the economy and give work to displaced employees during the depression would give the needed additional impetus to build a second. Thus, Timberline Lodge, with $246,893 of WPA funds, plus some additional dollars from others, was begun under the architectual genius of Gilbert Stanley Underwood, of lodges in Bryce Canyon, Zion, and Yosemite fame. Final cost per the WPA, $695,730.

It took a work crew of between one hundred and four hundred and forty-seven people daily over two years to build. They lived in a tent city, eight per tent, in Government Camp, while construction was ongoing. The lodge is a National Historic Landmark today. 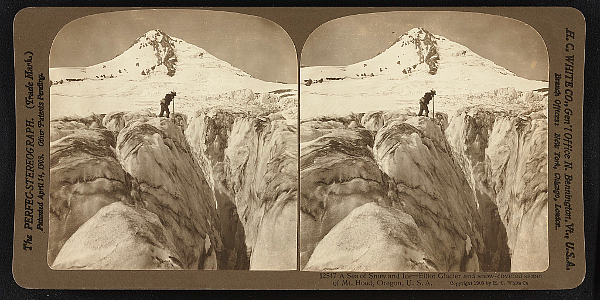 Timberline Lodge is located within Mount Hood National Forest about one and one half hour east of Portland, about sixty-three miles. It's predominantly a drive East on I-84, then Oregon 26. Check your favorite map program for specific details from your starting point. The street address is 27500 E. Timberline Road, Government Camp, OR 97028.

Timeline Lodge is still owned by the United States Forest Service and run by a private company for the same purpose as originally built, ... lodging for visitors to Mount Hood National Forest. First guests arrived for an overnight stay on February 4, 1938. It is open year round and boasts of having the longest ski season in the United States. Timberline has 3,690 feet of vertical, nine lifts, and includes snowboarding. There are bike trails in summer as well, plus hiking on part of the Pacific Crest Trail.

Open year round. Prices are competitive high. Silcox Hut runs $155 and up per person. Timberline Lodge rooms cost $100 (bunk beds for two) to about $260 during lower price seasons. Higher prices may occur during peak seasons, i.e. ski, summer, and other with prices in the $165 to $375 area.

You can take a ride in summer up the Magic Mile Chair Lift to 7,000 feet and see some breathtaking views. Cost $18 per person.

Beyond the Government Camp, Timberline Lodge, and Mount Hood within the lodge and national forest area, the state of Oregon has a plethora of natural and historic sites to wander around. To the south, there's Oregon Caves and Crater Lake, in the Portland vicinity, there's Fort Vancouver, and the unique Vista House on the way. Plus don't forget those Lewis and Clark and Oregon Trail vistas and history locations. 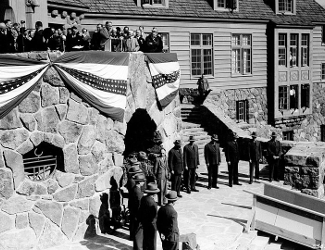 Roosevelt and the Dedication

The work of the Work Progress Administration that Roosevelt began constructed a copious amount of structures, many within the National Park Service and National Forest Service lands. When Roosevelt came to Oregon to dedicate Timberline Lodge on September 28, 1937, he brought along his wife, Eleanor, and spoke of the project as follows, ...

"This Timberline Lodge marks a venture that was made possible by WPA, emergency relief work, in order that we may test the workability of recreational facilities installed by the Government itself and operated under its complete control.

Here, to Mount Hood, will come thousands and thousands of visitors in the coming years. Looking east toward eastern Oregon with its great livestock raising areas, these visitors are going to visualize the relationship between the cattle ranches and the summer ranges in the forests. Looking westward and northward toward Portland and the Columbia River, with their great lumber and other wood using industries, they will understand the part which National Forest timber will play in the support of this important element of northwestern prosperity." 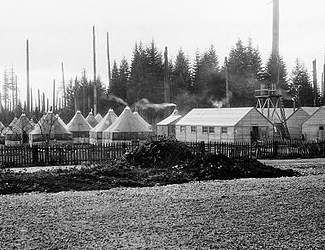 Cloud Cap Inn, the original inn (3,500 square feet) of Mount Hood, is still there, but no longer used for lodging. It is the headquarters for Crag Rats rescue services, who maintain the buildings. At times during summer months, they give tours of the building.

In the 1950's, there was a sky riding bus that served as a tram from Government Camp to the Timberline Lodge. It was called the Mount Hood Skiway, and yes, we're talking a bus with thirty-six passengers being pulled on wires like a gondola. Cost to use was 75 cents. It lost money and closed in 1962. 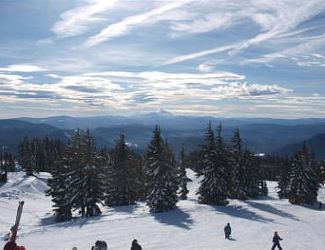 Mount Hood National Forest, at over one million acres, is a popular tourist attraction in Oregon, drawing over four million visitors per year. It was established as the Bull Run National Preserve in 1892; name change in 1924. Throughout its acreage, you can camp (both developed and primitive camping is available at dozens of sites), hike over one thousand miles of trails, fish, boat, and more. There are constant efforts to change its designation to a national park, still ongoing.

Skiing and winter sports can be engaged beyond the Timberline Lodge area, including Cooper Spur, Mt. Hood Meadows, Mt. Hood Skibowl, Summit Ski Area, and a Nordic only track at Teacup Nordic.