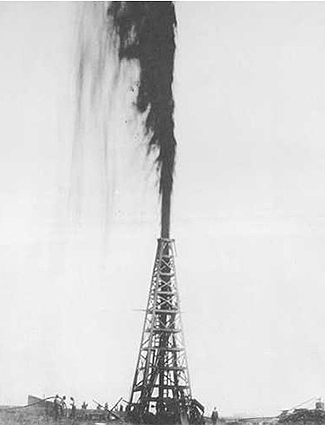 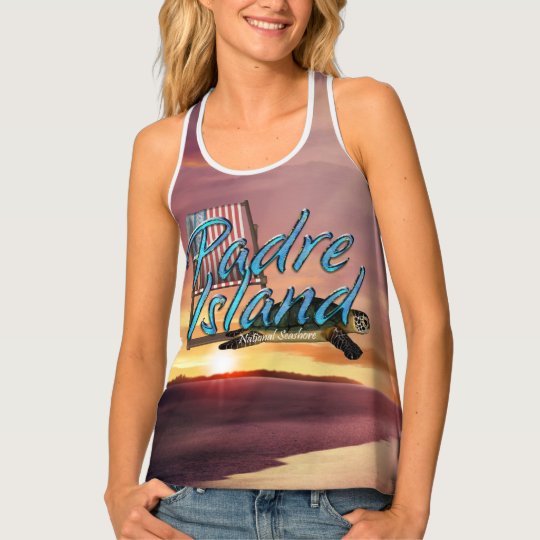 The idea that a major oil field might lay beneath the ground of Spindletop, Texas, south of Beaumont and only miles from the Gulf of Mexico, had been thought for nearly nine years, with the first drilling in 1893 by Pattillo Higgins and the Gladys City Oil, Gas, and Manufacturing Company. They were unsuccessful. It was not until January 10, 1901 that Captain Anthony Lucas, with partners, were successful at finding that oil and producing the first gusher, the Lucas Gusher, that proved the theory. It blew for nine days from its depth of 1,139 feet, at one hundred thousand barrels per day. That was the largest gush the world had ever seen. Within months, the entire area was filled with derricks; the first Texas oil boom had begun. Today the area is home to the Spindletop-Gladys City Boomtown Museum, founded, in part, by Lamar University, which tells the story, and a public park with marker that denotes the actual location of the first major gusher. Photo above: Spindeltop oil fields, 1901, Bernier Publishing Company. Courtesy Library of Congress. 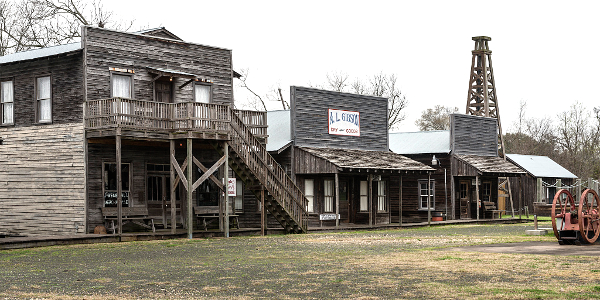 Let's start with its significance. Prior to this major oil find, oil was not used as a fuel, the quantity found had been insufficient to think of as more than a lubricant or lamp oil, even though knowledge of its existence in the area had been prevalent by local Indians and the Spanish as far back as 1543. Once the Lucas Gusher had let its vast amount of oil, however, and the subsequent findings all over the area began producing, the oil boom and oil industry had gained a footing. Now some think this bad in today's vernacular, but whether you do or not, it is just plain accurate to state that the discovery of a vast oil field that could push oil into fuel production accelerated the industrial age of the United States into an entirely different realm.

Beaumont became a boomtown; its population tripled from ten thousand to thirty thousand in just three months. Within one year, five hundred companies had been formed, and two hundred and eighty-five wells were producing crude. The fact that Spindeltop was found on a salt dome pushed other fields to be explored with the same geology; they were often successful as well.

Today you can visit a commemoration of the strike and boom at the Spindletop-Gladys City Boomtown Museum located several miles from the original strike location. It is well worth a visit. You can even travel that several miles to the original site of the Lucas Gusher, Spindletop Park and environs, where a Texas flag flaps above the wellhead. 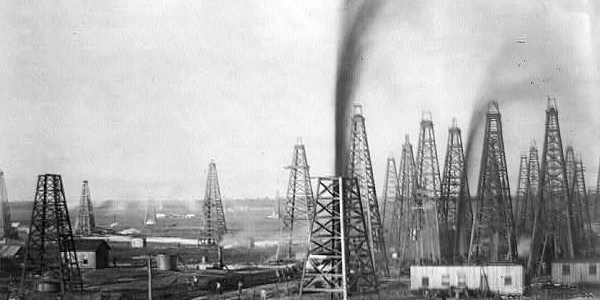 Spindletop-Gladys City Boomtown Museum is located on the campus of Lamar University. Physical address is Lamar University, 5550 Jimmy Simmons Boulevard, Beaumont, TX 77705. For those unfamiliar, Beaumont is located about eighty-seven miles east of Houston off I-10. Spindletop Park is located one and one half miles from the Museum south off Route 93. There's even an RV Park nearby called the Lucas Gusher, for those that find things like that interesting.

Spindletop-Gladys City Boomtown Museum includes a Visitor Center, the Gladys City Gift Shop, reconstructed Lucas Gusher oil rig and buildings representative of the oil boom period. During some days of the year, there are costumed living history interpreters throughout the grounds.

Spindletop Park holds a viewing platform and educational signage that point you toward the original wellhead site of the Lucas Gusher; a flag flies above it. Apparently the actual location is on private property.

Spindletop-Gladys City Boomtown Museum is open Tuesday to Sunday, 10-5 except Sundays 1-5 p.m. Admission is $5 adults and $2 children 6-12. Free under 6. Other discounts may apply. There are guided tours some days and a self-guided tour available daily.

Well, there's plenty to see in the area outside the Spindletop parks. Within Beaumont, there's the John Jay French House Museum, the Chambers House Museums, and lots of historic churches. You are a good piece away from the more notable locations in Houston, or farther afield in New Orleans, if you're traveling along the I-10 corridor on a longer trip. If you're looking for more natural pursuits, just north of the Beaumont area is Big Thicket National Preserve. 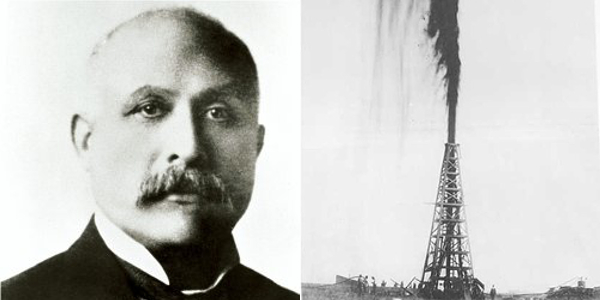 Anthony Lucas and His Gusher

Anthony F. Lucas was a salt dome expert and undeterred by the previously unsuccesful attempts at Spindletop. He negotiated a lease from the Gladys Company in 1899, made a separate agreement with Patillo Higgins, then needed further financial assistance after initial attempts failed as well. He brought in an experienced team to drill on land adjacent to the Gladys Company, pushed to 1,139 feet, and then witnessed the largest geyser of oil ever seen in the world. Nine days later it was capped.

But the effort was not perfect for Lucas; his failures and need for additional financial support had left him with a small share of the profit. Higgins was left out altogether. 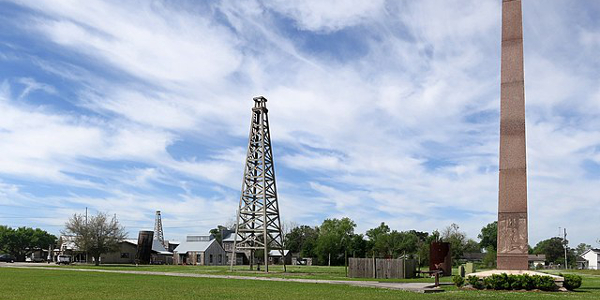 The importance of the Lucas Gusher had been apparent to the entire state of Texas since its first gush in 1901. By 1941, a monument was erected on the site of the wellhead near what is today's Spindletop Park. However, it was eventually moved in 1978, due to sinking, to its current location at the Spindletop-Gladys City Boomtown Museum.

The museum itself began in 1975 as a Bicentennial project to recreate the buildings of the Gladys City boomtown on land owned by the original company. Once completed, it was given to the State of Texas to be governed by Lamar University. The site opened on the 75th anniversary of the strike, January 10, 1976. There are fifteen replica buildings, a replica of the Lucas Gusher, and the original monument. 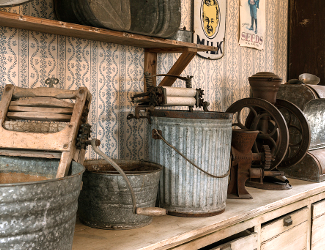 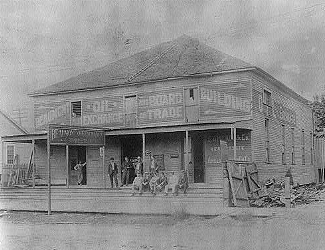 The Boom and Its Aftermath

By September 1901, there were six producing wells at Spindletop, but that was only the beginning. Land speculation became rampant, with one well which had cost $10,000 selling for $1.25 million. Beaumont saw its eventual boom population rise to fifty thousand. A total of $325 million was invested in Texas oil fields in 1901; not all of it was profitable. Overproduction at Spindletop itself saw a precipitous drop in production, from 17.5 million barrels in 1902 to an annual rate of 3.65 million barrels in 1904.

For nearly twenty years, the Spindletop area was considered a diminished field, a veritable ghost town, but in 1925, a second boom occurred when speculators attempted to drill on the perimeter of the salt dome at deeper depths. A flank well succeeded in November at 5,400 feet. In 1927, 21 million barrels of oil were produced at Spindletop in that year alone; 60 million within five years of the flank well discovery.

By 1985, 153 million barrels of oil had been found in the Spindletop fields. Famous oil companies were formed due to the strikes; The Texas Company (Texaco), Gulf Oil, Sun Oil, Humble Oil, which became Exxon, and Magnolia, which became Mobil, among them.