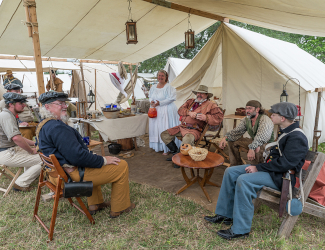 It would only last eighteen minutes, this battle that would end the Battle for Texas Independence and usher in the Republic of Texas as an independent nation. No, it's not the most famous battle of the war for independence, that would come in defeat at the Alamo the year before. It would come after much bloodshed, some victories, and more determination over six months through battles at BĂ©xar, Goliad, and more. But now, and at the surrender and subsequent treaty several days later by Santa Anna to Sam Houston, those eighteen minutes on April 21, 1836 would prove decisive. Image above: Painting of the Battle of San Jacinto, 1895, Henry McArdle, Texas State Senate. Photo courtesy Carol M . Highsmith, 2014, Library of Congress. The area around today's Houston and Galveston Bay was sparsely populated in 1835 when the battle for Texas independence began, with small to large ranches conducted by citizens of Mexico. However, by that year, the citizens had become tired of the dictatorial regime of Mexican President Antonio Lopez de Santa Anna. But his six thousand man army was powerful, taking the Alamo in March and recovering the bastion at Goliad later that month. But, for various tactical reasons that would prove his downfall, Santa Anna divided his troops, and with a portion of them resting in the groves of trees of San Jacinto, Texas General Sam Houston saw his opportunity. What those eighteen minutes would not gain.

Today, you can visit the site of his spectacularly quick victory. There's trails to walk, driving tours to drive, and tours of the monument, grounds, and museum. And yes, years later they'd name the area after Sam, today's Houston, Texas. 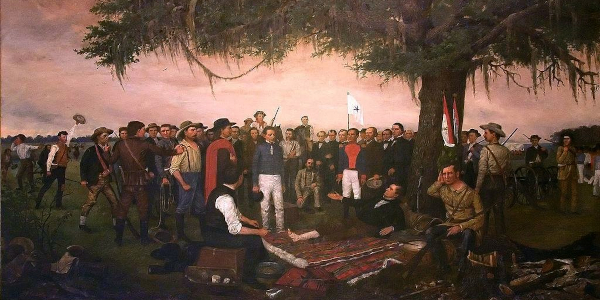 There are one thousand two hundred acres of the San Jacinto Battleground to explore, including a driving tour, marsh walking path, and tours of the San Jacinto Monument. There are four picnic areas, too. The Museum at the monument has exhibits, orientation, and more. You can also fish the Buffalo Bayou.

There's lots of tours, including bike tours, if you're there on the right day. The best day is likely San Jacinto Day, on or near the anniversary of the date of the battle, when the area is usually filled with reenactors and living history representing both sides of the conflict.

The battlefield itself is free. Tours of the San Jacinto Monument does require a fee, $12 for adults, $6 children 11 and under. The park is open year round, with exceptions for Major Holidays. The Monument and Museum are open Friday through Sunday. Check the park website for any changes in that schedule before you go.

You're in the Houston metroplex, so there's plenty to do about local history, sports, and more, including the nearby San Jacinto Museum of History and the Battleship Texas. A bit more drive and you're near Spindletop, home to the first Texas gusher, the nature of Big Thicket National Preserve, and if you wish to stay more in tune with the battles for Texas Independence, further away and you've got the sites of the Alamo and the Battle of Goliad. 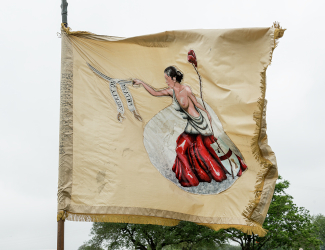 With the Mexican Army divided, Sam Houston camped his forces nearby at Lynch's Ferry on April 20. Santa Anna was three quarters of one mile away at the battleground with twelve hundred troops, resting and eating while awaiting the arrival of five hundred more soldiers before he intended to battle Houston. But Sam Houston and the Texians siezed the opportunity. He marched toward the Mexican Army at 3:30 in the afternoon of April 21 with seven hundred and fifty men, shielded by a grove of trees and a rise in the terrain.

At 4:30, the Texans marched into battle in three prongs, surprising Santa Anna and his men. The shouts of "Remember the Alamo" and "Remember Goliad" screamed through the battlefied. In eighteen minutes, the Texans had killed six hundred men and captured hundreds of others; they'd only lost nine (some reports state eleven) themselves.

Photo above: One of the battle flags used by the Texan army during the Battle of San Jacinto, 2014, Carol M. Highsmith. Courtesy Library of Congress. 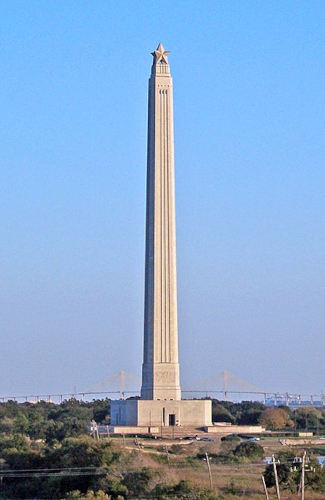 Preservation of the San Jacinto battlefield began in 1899, with the original section and 570 foot monument, costing $1.5 million and dedicated on April 21, 1939, completed on five hundred acres. Additional lands have since been acquired, resulting in the current twelve hundred acre park.

The historic site was named a National Historic Landmark in 1960. 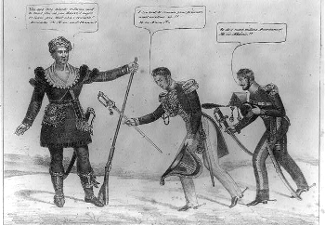 General Santa Anna escaped the melee of the battle, dressing as a private, and retreating to the area of Vincent's bridge. His aide, General Martin Perfecto de Cos, escaped as well. Houston pursued both, finding Santa Anna hiding in a marsh the next day, Cos two days later. The troops finding Santa Anna marched him to General Houston, who had been shot in the ankle during the battle. For two weeks, the generals negotiated a peace treaty. The Treaties of Velasco called for all Mexican troops to move south of the Rio Grande River.

Did this end all conflict? No. Mexican authorities deposed Santa Anna and did not recognize the Republic of Texas, leading to additional conflict and skirmishes before the Republic of Texas and its seventy thousand citizens (1840 estimate) decided that becoming a state of the United States was the preferable move effective February 19, 1846.

Photo above: Drawing showing one of the final acts of the Texas Revolution with Sam Houston at the surrender of Santa Anna and General Martin Perfecto de Cos after the Battle of San Jacinto. Courtesy Library of Congress.