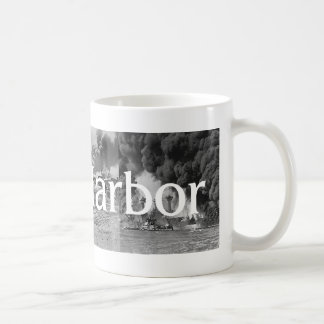 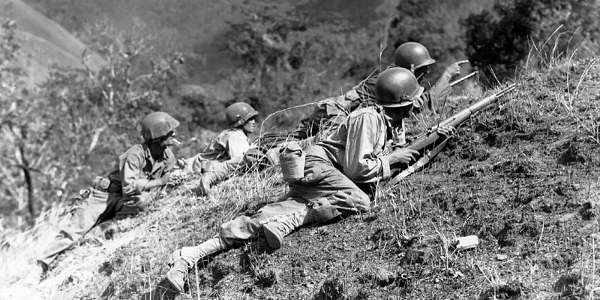 With the invasion of Normandy in 1944, gains on the Western front by United States and Allied troops and Soviet troops on the Eastern front pinched the German Army in ever growing Allied controlled territory back to Germany itself. The same was true in the Pacific Theater as the Allies battled the Imperial Japanese from one Pacific island to the next, gaining ground in pursuit of the islands of Japan. It would continue through 1945 in the same manner through battles on both fronts, until a final blows were dealt to the German Army with surrender upon the fall of Berlin and the Reichstadt, and the Japanese surrender after Hiroshima (August 6) and Nagasaki (August 9).

January 31 to February 21, 1945 - Battle for the Recapture of Bataan, Philippines (Pacific Theater)
Troops: USA 35,000; Japan 2,800.
Casualties (Killed/Wounded/Missing): USA 1,026; Japan 2,475 plus 25 captured.
Effort to secure the western side of Manila Bay with Filipino guerrellas on the side of the USA succeeds after initial struggle, giving USA base for other Phillipine operations.

February 3 to March 3, 1945 - Battle of Manila, Philippines (Pacific Theater)
Troops: USA/Filipino Guerrillas 38,000; Japan 17,000 plus.
Casualties (Killed/Wounded/Missing): Allies 6,575; Japan 16,655.
Three years of Japanese occupation of Manila and Phillipines is ended after month long battle that destroyed much of the city and cost an estimated one hundred thousand civilian lives.

January 9 to August 15, 1945 - Battle of Luzon, Philippine Islands (Pacific Theater)
Troops: USA/Filipino Guerrillas 280,000; Japan 275,000.
Casualties (Killed/Wounded/Missing): USA 47,190; Japan 205,535, plus 9,050 captured.
Luzon island group is liberated after two amphibious landings of U.S. troops in Lingayen Gulf and southwest of Manila. Most strategic sites captured by March. One of the highest casualty totals for the United States in World War II despite the decisive victory.

April 1 to June 22, 1945 - Battle of Okinawa, Ryukyu Islands Japan (Pacific Theater)
Troops: USA 250,000 combat troops, Allied naval support; Japan/Okinawa conscripts 106,000.
Casualties (Killed/Wounded/Missing): USA 20,195 plus over 50,000 wounded; Japan 77,166 to 110,000 plus 7,000 captured.
Series of battles in islands to secure Okinawa for use as staging area for planned invasion of mainland Japan. Significant loss of ships and men and the largest amphibious assaut in the Pacific Theater. Ninety percent of the buildings on Okinawa were destroyed.

After the defeat of the last major offensive by the Germans in the western front at the Ardennes Forest in late December and early January 1945, it was becoming more and more clear that victory would be achieved by the Allies. When the Soviet Union with Polish allies conquered East Prussia, there was no denying it. On February 4, 1945, the United States, Great Britain, and the Soviet Union met at the Yalta Conference and decided how to occupy Germany after the final push to defeat them.

By April 25, 1945, the Soviet forces and American forces met at the Elbe River. Five days later the Reichstag was captured and Hitler was dead. Total surrender was signed on May 7 by acting German commander, Chief of Staff General Alfred Jodl, at General Eisenhower's headquarters at Reims.

From March to August, air raids against sixty-seven Japanese cities, including Tokyo, had been effective at destroying sixty-five percent of construction. The Allies called for total surrender of Japan on July 27 in the Potsdam Declaration. The Japanese refused, prompting Nagasaki and Hiroshima. On August 15, 1945, Japan surrendered.

We the undersigned, acting by authority of the German High Command, hereby surrender unconditionally to the Supreme Commander, Allied Expeditionary Forces and simultaneously to the Soviet High Command all forces on land, sea and in the air who are at this date under German control.

The German High Command will at once issue orders to all German military, naval and air authorties and to all forces under German control to cease active operations at 2301 hours Central European time on 8 May and to remain in the positions occupied at that time. No ship, vessel, or aircraft is to be scuttled, or any damage done to their hull, machinery or equipment.

The German High Command will at once issue to the appropriate commander, and ensure the carrying out of any further orders issued by the Supreme Commander, Allied Expeditionary Force and by the Soviet High Command.

This act of military surrender is without prejudice to, and will be superseded by any general instrument of surrender imposed by, or on behalf of the United Nations and applicable to GERMANY and the German armed forces as a whole.

In the event of the German High Command or any of the forces under their control failing to act in accordance with this Act of Surrender, the Supreme Commander, Allied Expeditionary Force and the Soviet High Command will take such punitive or other action as they deem appropriate.

IN THE PRESENCE OF

On behalf of the Supreme Commander, Allied Expeditionary Force. W. B. SMITH

On behalf of the Soviet High Command SOUSLOPAROV

We, acting by command of and in behalf of the Emperor of Japan, the Japanese Government and the Japanese Imperial General Headquarters, hereby accept the provisions set forth in the declaration issued by the heads of the Governments of the United States, China, and Great Britain on 26 July 1945 at Potsdam, and subsequently adhered to by the Union of Soviet Socialist Republics, which four powers are hereafter referred to as the Allied Powers.

We hereby command all Japanese forces wherever situated and the Japanese people to cease hostilites forthwith, to preserve and save from damage all ships, aircraft, and military and civil property and to comply with all requirements which my be imposed by the Supreme Commander for the Allied Powers or by agencies of the Japanese Government at his direction.

We hereby command all civil, military and naval officials to obey and enforce all proclamations, and orders and directives deemed by the Supreme Commander for the Allied Powers to be proper to effectuate this surrender and issued by him or under his authority and we direct all such officials to remain at their posts and to continue to perform their non-combatant duties unless specifically relieved by him or under his authority.

We hereby undertake for the Emperor, the Japanese Government and their successors to carry out the provisions of the Potsdam Declaration in good faith, and to issue whatever orders and take whatever actions may be required by the Supreme Commander for the Allied Poers or by any other designated representative of the Allied Powers for the purpose of giving effect to that Declaration.

The authority of the Emperor and the Japanese Government to rule the state shall be subject to the Supreme Commander for the Allied Powers who will take such steps as he deems proper to effectuate these terms of surrender.

Accepted at TOKYO BAY, JAPAN at 0903 I on the SECOND day of SEPTEMBER, 1945, for the United States, Republic of China, United Kingdom and the Union of Soviet Socialist Republics, and in the interests of the other United Nations at war with Japan.