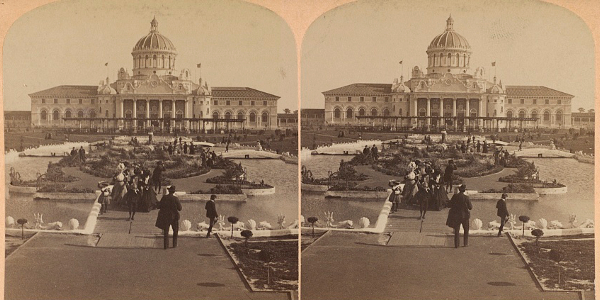 Total Cost - Capital stock raised was $250,000 with total resources of $1 million, including $50,000 appropriated by the South Carolina Assembly. Total cost by end of the fair was $1.25 million. Expo authority went bankrupt.

Sanction and Type - Prior to the Bureau of International Exhibitions. Would be considered a Special Category, Recognized event today like those on the 2-3 or 7-8 years of the decade. 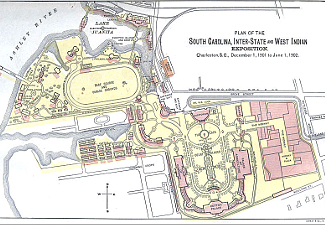 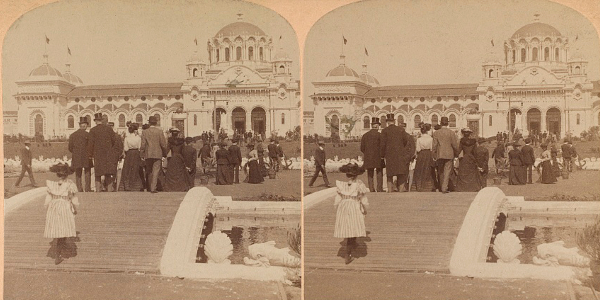 It was a small fair as far as scope and international participation, and many do not think of it as world caliber, however, the South Carolina Inter-state and West Indian Exposition was a bold and harmonious fair, held on Lowndes, the former plantation of the fair president, two and one half miles north of downtown along the Ashley River, that had previous held history of a racetrack and the Civil War, apart from the most famous Civil War location of Charleston, Fort Sumter, and now hosts part of the campus of the Citadel as well as Hampton Park. The idea first began in 1899 with Colonel John H. Averill, a railroad executive. He thought that Charleston was lagging behind other southern cities that had already hosted a world's fair like Atlanta had in 1895 and Nashville had two years earlier. This exposition would focus on the relationship Charleston's port had with shipping to the West Indies.

The idea was enthusiastically backed and the site chosen connected to downtown by streetcars. On the site, there was a Women's Building located inside the plantation mansion, government exhibits transported from the Buffalo Pan American Exposition that had just closed earlier in 1901, a total of fourteen buildings devoted to the states and several nations from the Caribbean and South America. The Cotton Palace was the most impressive building, three hundred and fifty feet long with fifty thousand square feet of exhibit space, and rose in front of the Sunken Gardens. A Streets of Cities exhibit showed the attributes of the large cities in the United States, including the Philadelphia exhibit that held the actual Liberty Bell, which arrived on January 9.

Above photo. South Carolina building at the fair, 1902, Underwood and Underwood. Courtesy Library of Congress. Below: The Cotton Palace and Sunken Gardens at the Exposition, 1902, Appleton's Annual Cyclopaedia. Courtesy Wikipedia Commons. 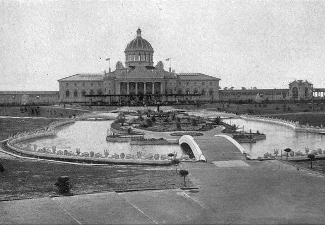 Other buildings included the Palace of Agriculture, the Palace of Commerce, Mining and Forestry Building, an Auditorium seating four thousand, the Court of the Palaces, Machinery and Transport Buildings, the United States Government Building, Art Palace, Administration Building, and Negro Building. State buildings included New York, Illinois, Maryland, Missouri, and Pennsylvania, among others, with city buildings for Philadelphia and Cincinnati. The Louisiana Purchase Building touted the upcoming Louisiana Purchase Exposition in St. Louis in 1904. For amusement, there was a Midway including the Temple of Fortune, Streets of Cairo, the Wayside Inn, and an Esquimaux Village. There was also a miniature railway on site.

The fair, despite having a grand and good site, did not fair well with the public. Held in winter, there was uncharacteristically bad weather, and attendance did not meet expectations. Some say part of that was due to the fact that the buildings were not done when the fair opened, but this, unfortunately, is more usual than not at expositions. For all those reasons, and more, receipts for the fair were slightly over $300,000, substantially below costs. The Expo Authority company went bankrupt and in today's world exposition history, the Charleston South Carolina Inter-State and West Indian Exposition is largely forgotten. There were positives from Charleston's hosting, however, as new businesses were attracted to the city, and the park and additional ground at the college, the Citidel, would become legacies of the event.

Anthony Chibbaro - "The theme had no national importance. The official name of the expo was "The South Carolina Interstate and West Indian Exposition." As can be seen by the name, there was no national importance to this exposition. The powers that be in Washington did not deem it of enough significance to make an appropriation in the form of money from Congress and this had much to do with the financial problems later associated with the expo. President Teddy Roosevelt did visit the fair, and when the fair was over and the Exposition Company was facing bankruptcy, Congress did appropriate some monies, but it was too little too late.

Bad weather kept attendance down. This was a "midwinter" fair aimed at taking advantage of Charleston's mild winter weather. But the winter was a little more severe and rainy than anticipated and this kept attendance down. Also, the financial problems facing the Exposition Company made it into the newspapers during the last month or two and this also depressed attendance. Funding base was unstable. Gate receipts did not materialize to the extent hoped for and this led to bankruptcy for the Exposition Company."

Bruce Harvey - "Charleston was trying to do what the others had before. For the public after the fairs opened, the public reaction was reasonably high for all three (including Atlanta and Nashville). It was a tougher sell for Charleston/Nashville, who cared about Charleston? For the media after opening day, Charleston was not ready on opening day, with the state building not even complete. Charleston was also turned down by the federal government (although later it was agreed, with Teddy Roosevelt's help, that the Buffalo exhibit would come). Charleston was a good event that didn't work out. The timing for Charleston was perfect with the West Indies, and the best port. Excursion trains to Florida would bring the winter/spring visitors, but the weather was cold and rainy. There was also the crop failure, and the farmers did not have the extra $30 to attend. Charleston was eventually the 1st world's fair to go bankrupt." 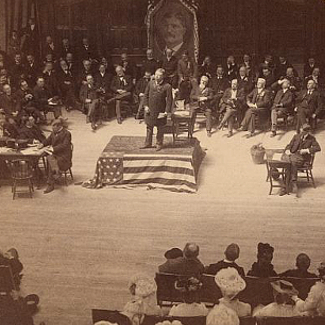 There were also commissioners appointed for the following states, but it's uncertain about whether they participated with exhibits: Alabama, Arkansas, Delaware, Idaho, Iowa, Nevada, Tennessee, Vermont, Virginia, Washington, and Wyoming.

Note: It is sometimes difficult to tell whether certain nations or states actually participated in a significant way. Newspaper reports as well as the official guidebook and reports may indicate participation when actual participation did not occur, or occurred minimally. Take the above as a guide, not gospel. Expo Tidbits
Exposition opened December 2, 1901 (Sunday) with great fanfare with the Governor and Mayor in attendance alongside 22,000 visitors.

Among the notable guests at the exposition were Samuel Clemens, aka Mark Twain, and President Theodore Roosevelt, who attended April 9 on a day that saw 24,000 in attendance.

Largest attendance day was May 22, 1902 with 25,000 visitors. It was Wagener Day after the President of the Expo Company, Captain F.W. Wagener.

One of the exhibits in the Midway was a four hundred foot long painting of the Battle of Manassas.

Lake Juanita covered thirty acres of the fairgrounds and contained an "Electrical Island."

Nickname of the fair was the Ivory City due to the color of its buildings.

Legacies
After the fair part of the site was turned into Hampton Park, a fifty-six acre park of history, including the fair, a 1791 horse racing track, and and Civil War prison. Another portion of the site is now part of the Citadel University campus. The bandstand in the park remains, although it has been moved and rebuilt. 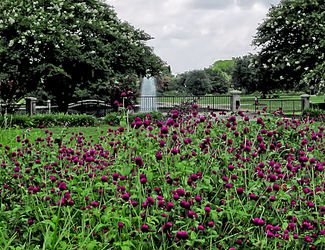