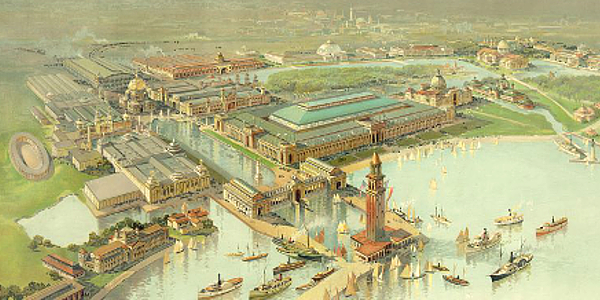 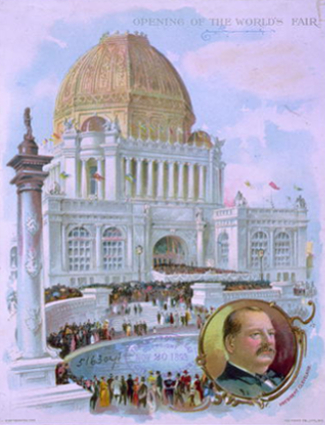 Site Acreage - 686.1 acres in what is now Chicago's Jackson Park.

Sanction and Type - Prior to the Bureau of International Exhibitions. Would be considered a Universal style Registered event today like those on the 0 years of the decade. Act of Congress provided that the President of the U.S. would issue a proclamation of time and place and extend invitations to foreign nations to participate in the World's Columbian Exposition.

Ticket Cost - Various different types of tickets were used, including Souvenir Tickets (4 designs, Columbus, American Indian, Washington, Lincoln: 6 million ordered, good for any day). Plain Tickets (good only on date of sale) 25 million ordered. Passes for free admissions, including photo pass, complimentary card of admission to high dignitaries, workmen's passes (good for 1 month), return checks were used for those with passes who had to leave and re-enter the grounds each day. Daily ticket 50 cents. After May 22, a children's ticket (age 6-12, under 6 free) cost 25 cents. Later, during October 10-21, children from 6-18 admitted for 10 cents. Originally gates were open from 8 a.m. to 7 p.m., extended to open 7:30 a.m. to 11 p.m. 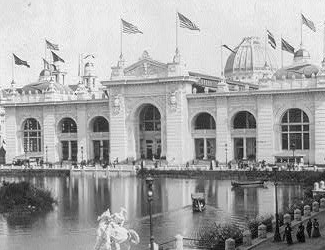 The World's Columbian Exposition may have been the most majestic World's Fair of all-time with resplendent buildings that would be credited for starting the trend of architecture that would extend to many government buildings in the United States for centuries. To many, it was the White City. Alabaster coatings, actually staff plaster, on the temporary buildings, of which most were constructed, gleaned in the sun. Nearly two hundred acres of the fair site was covered by the buildings. The fair, on the more whimsical side, introduced the Ferris Wheel within the eighty-five acres of amusement known as the Midway Plaisance. The Ferris Wheel seated 2,160 passengers, the all-time biggest.

Chicago had not won the right to hold the Columbian in an easy fashion. Washington, D.C. began developing a plan for a three year exposition in 1885 that would begin with the Centennial Anniversary of the Constitution's adoption and last through the 400th Anniversary of America's discovery. New York, Chicago, and St. Louis also wanted to host. Chicago won, chosen as host city by Congress with approval on April 25, 1890. 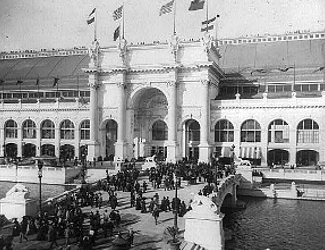 Jackson Park was an uninviting tract of swamps, sand, and scrub prior to the event, but over the next three years would be transformed into an ornamental arrangement of lakes, canals, and buildings on built-up land, using 120,000 cubic yards of dirt. Once the buildings were constructed, the expo authority held a dedication on October 21, 1892 in a program lasting three days. That program was used to disseminate information about the exposition the following year. Opening Day of the expo occurred on Monday, May 1. The Opening ceremonies were held in the Grand Plaza at the west end of the Court of Honor with President Cleveland in attendance. The paid admission that day was 128,965. Low attendance followed during the first week, and an impending financial crises loomed overhead, culminating eight days later with the failure of Chemical National Bank of Chicago and its branch at the exposition. That low attendance did not last.

There were seven distinct parts of the exposition: the Basin and the Canal with architecture of the Grand styles; the wooded island; the Government location where the United States and other foreign pavilions were built; Federal State location with the Fine Arts building as its hub; the Midway Plaisance; Live Stock, outdoor Agricicultural Exhibits, Convent of La Rabida, Leather, Forestry, Dairy and Anthropological buildings; plus a region of railway yards, storehouses, bonded warehouses, and workshops of fair and concessionaires. Of course, the buildings and exhibits within them were the stars, plus that Midway.

Beyond the exhibits within those buildings, the World's Columbian was known for its Congresses with different Congresses held each week, over two hundred in all, including the Department of Woman's Progress, Department of Public Press, Temperance, Moral and Social Reform, Music, and more.

It was a success by any means, even turning a profit, per World's Fair accouting. The White City spurred the City Beautiful Movement plus a building boom in similar architectural style at state capitals around the nation, and amazed the public who came. Receipts of concessionaires themselves totaled $16,583,051.53, of which the exposition took nearly a 25% cut.

Prasch - "Chicago was pioneering in several ways. The White City created for the fairground, on land largely reclaimed from Lake Michigan, was an architecturally unified ensemble. This was in some ways controversial - especially among architects, who found the style regressive and unmodern - but it was hugely popular among mass media and fairgoers. Chicago also featured a systematic anthropological approach to the display of non-European peoples, even if this was undercut to a large degree by the Midway. This was already implicit, I think, in, say, London 1886, or Paris 1878, but not, I think, in this kind of systematic way. Perhaps more significantly, Chicago pioneered the "Midway Plaisance," site of Ferris Wheel and Little Egypt's bellydancing and much else. Some of this was carried over from previous fairs, as well, but reaches new heights in Chicago, where the separate entertainment sphere, given over to private enterprise, is most fully developed. And no fair would be complete without a midway after 1893. The city made its case in the competition for a site, and pretty much proved it in its carrying out of the fair."

Leonard Levitan - "Chicago 1893 introduced the Ferris Wheel, Picture Postcards, and established the Souvenir as a valuable momento, kicking off a giant new industry in America. They produced hundreds of unique items for that event and it is a collector's paradise today. It also introduced grand European architecture and the concept of intelligent urban planning to America whose cities at that time were growing helter skelter with no fixed plan as immigrants folled in (i.e. - New York). It is no coincidence that Fredric Olmstead was one of the planners. Every bank built in America after 1893 showed this influence. 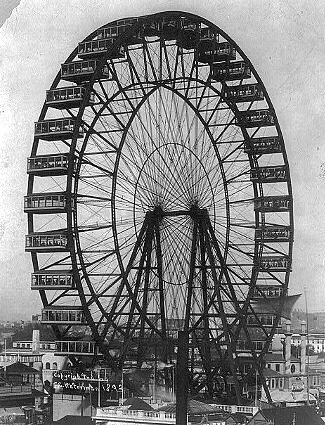 A variety of sources list different participants. The Official Report Pass List and Official Report Department of Works, plus the Illustrated History, and other lists at times differ. Some are listed with buildings, exhibits, and/or as concessions. Use the above as a guide, not gospel.

Expo Tidbits
Chicago Day, held on the anniversary of the burning of Chicago on 10-9-1871, was the highest attendance day with 716,880 paid admissions.

The exposition used more electricity than the whole city of Chicago at that time.

There was a Moveable Sidewalk taking visitors down Casino Pier and back, even though the tower that was supposed to be built at the end as an attraction had never been built. An intramural railway circled the grounds, cost 10 cents for a 20 minute ride at 12 mph. There was also a Sliding Railway and Ice Railway as well as Gondolas plying the various canals and lakes.

Capacity of restaurants on site was 30,000 people per hour.

Legacies
Field Columbian Museum, now the Museum of Science & Industry in Palace of Fine Arts Building in Jackson Park. The museum opened to the public on June 2, 1894. There was land for University of Chicago, Chicago's first elevated transit line, and other benefits, including the tangible and more intangible: it provided employement during hard times, spurred investment throughout the state, increased outside recognition of Chicago's potential, attracted visitor dollars and generated tax revenue, and helped propel the area's image as economic powerhouse. From the Midway, the original Ferris Wheel would make it to St. Louis in 1904, but eventually turn to scrap. It left a legacy of those wheels at amusement parks which still lasts today. The Maine Building was moved to Maine in Poland Spring and is open to the public in the summer. The Dutch House was moved to Brookline, Massachusetts and is now a tourist attraction. The Norway Building is located in Blue Mounds Wisconisin, and is open to visitors.

Daniel Burnham was the leader and architect of the 1893 fair. Grand plan of the exhibition layout was designed by Frederick Law Olmstead, with all principal buildings with both land and water frontage. Lyman Gage chosen president of corp with Thomas B. Bryan and Potter Palmer as Vice President. Gage later replaced prior to opening by William Baker and he, during the fair term, by H.N. Higinbotham. George R. Davis was Director-General. 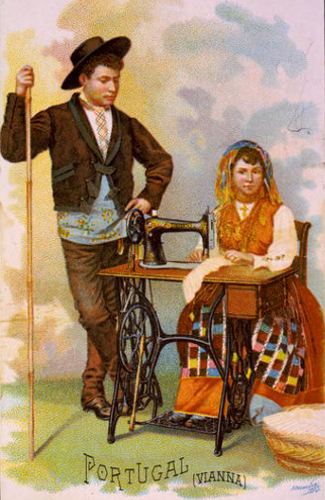