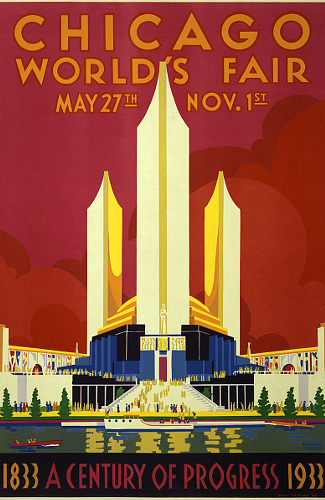 Site Acreage - 427 acres stretching for 3.5 miles along Chicago's lakefront, including an island in Lake Michigan. There were 86 acres of lagoons.

Sanction and Type - Although the Bureau of International Exposition did exist in 1933, the first fair officially sanctioned was Brussels in 1935. They did, however, in January 1931, allow member nations to participate in the first year, although not officially sanctioned. The 1934 season was not sanctioned with prohibition on BIE nations from coming officially. Would be considered a Special style Registered event today like those on the 5 years of the decade.

On January 10, 1930, President Hoover invited the nations of the world to participate. 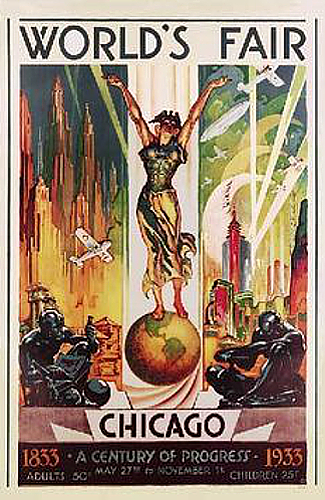 It was a large fair focused on the future, even though it's name, the Century of Progress, seemed to indicate the past in its official theme to celebrate Chicago's 100th year of incorporation. In the first decade of the Bureau of International Expositions, neither year was sanctioned, although the first, 1933, was allowed to exhibit member nations. Due to that and perhaps more with the slump in the world's economy, the fair was less international than hoped. And it is criticized for that. The Hall of Science was its central feature on eight acres and other progressive buildings dotted the fairgounds, including the buildings of Radio and Communications, Electricity, Food and Agriculture, and the Social Sciences. The site was six miles long and six hundred yards wide, with lagoons aplenty along Lake Michigan.

The fair at night was a spectacular vision with searchlights combing the skies, colored lights, and rocket cars. Some folks said it was as if comic books had come alive. The Skyride towered over the middle of the fair, 1,850 feet long, 628 feet high with observation decks and those rocket cars at the two hundred foot level. It could handle five thousand visitors per hour. 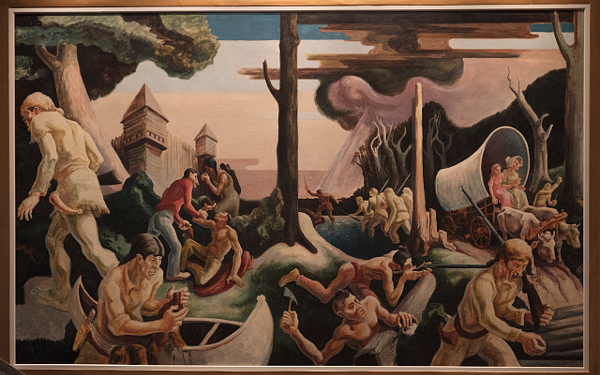 For many, it was the theme pavilions that stood out, including the Adler Planetarium, Agricultural Group, the Dairy Building, Hall of Social Science, Radio and Communication, Bendix Lama Temple, Electrical Building, and the General Exhibits. Others, such as the Hall of Religion, Horticultural Building, Streets of Paris, Fort Dearborn, Home & Industrial Arts, Million Years Ago, Home Planning Hall, Indian Village, Maya Temple, and Travel and Transportation had their supporters.

There was entertainment everywhere. Motor Boat Shows, Spoors Theatre, an Air Show, Pageant of Transportation, a Poultry Show, and a Domestic Animal Show. And the amusement rides on the Midway took care of many an hour for kids and adult kids alike, whether that be on the Enchanted Island, Goodyear Field, the Days of '49, the Great Beyond, or the controversial Sally Rand dance.

One odd feature, for some reason the buildings were mostly windowless.

Although the Century of Progress is often criticized by World's Fair historians, it was a success, not only in the sense that it turned an expo profit, but in the way it stimulated business activity in Chicago for the years of and prior to the fair. That was no small feat. After the first year, the fair was brought back by popular demand. After the Fair closed, part of the profits were donated to the Art Institute, Adler Planetarium, and the Museum of Science and Industry. And one unique feature of its financial footing, there were no federal, state, or city subsidies, unlike other fairs. With that limitation, the fair authority took an astere and astute approach to spending. No contract would be let unless there was a means to pay for it. No buildings would be constructed until there was rental for the space to pay for it. In the end, all bondholders and creditors were paid in full. At the final accounting, the depression actually assisted, with suppliers and contractors taking Gold Notes instead of cash for work or services rendered since they had no other work. Bids for work itself were at times one third the original estimates.

Joseph Seliga - "Scientific Theme of fair breathed new life into the world's fair concept as a result of Chicago. Of course now some disapprove the science idea as propaganda, but it was generally popular at time, though it may have affected low attendance. Although in the long term the theme was positive because of its effects on other fairs. In the short term it was only average. Some blame poor attendance on science exhibits, especially the lack of imaginative, Futurama' type of exhibits which do not appear until 39/40 New York."

"In the 2nd year, foreign villages were added to the fair, based on success of Belgian Village in 33. Similar to science exhibits, their long term success was probably greater than short term. The concept spread to other fairs, and to its peak with EPCOT. However at the time it didn't help to boost attendance in the 2nd season. Also, later critics (actually I may be the only!) have argued that they overshadowed the ethnic days/celebrations of fair and gave skewed impressions of foreign cultures because they lacked international government or local ethnic involvement."

Steve Shrenk - "The Chicago fair introduced numerous new concepts, for which it has received little credit for over the years. It introduced new concepts of exhibiting (eliminating the judging of exhibits in favor of unified displays among competing companies), display (showing production over just rows of products) theme (scientific emphasis tied to looking towards the future, architectural developments (first suspended roof structure built in U.S., first thin shell roof, first major use of neon in architecturel lighting. First use of electricity at that scale, first use of pre-fabrication on such a major scale... ) My dissertation goes into this in detail. The initial theme of the Chicago fair was to celebrate the 100th anniversary of Chicago. Organizers realized that this theme was too narrow and then looked to the broader theme of the advancement of mankind through science. It was a great theme to help Americans (and the world) look beyond the Depression to a future life made better through developments of science."

"The depression hit after the fair planning was underway. While the poor economy impacted the event in numerous negative ways (ie fewer foregin nations building national pavilions, lack of entertainment funds for many people to attend the event) it also had many positive effects. These include: Only major event taking place in U.S. contributed to huge attendance figures, being the only major building project (besides Rockefeller Center) going on in U.S. it received greater publicity that it otherwise would have, with little other construction projects going on and few jobs in general available there was little threat of union strikes.) 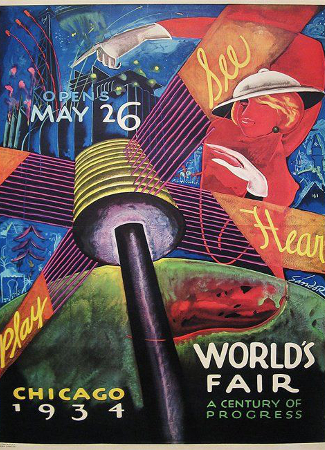 A variety of sources list different international participants. Some are listed with buildings, exhibits, and/or as concessions. Use the above as a guide, not gospel.

Not one dollar paid to any newspaper, newsreel, or periodical, or radio station for advertisement, all provided free through news element of fair. There are some reports of a publicity department, unsure what those funds paid for.

At high point, during 1933, Century of Progress exposition itself employed 6,940 people. During peak of 1933 season, 22,000 total were employed at fair, and one contemporary observer estimated that fair had been responsible, directly or indirectly, for 100,000 jobs, $400 million in business brought to the city, and an increase of 17% in bank deposits (against national average of 7%). Department store sales increased 19% against decrease of 25% for 1932.

Legacies
Several existing structures there before the fair were incorporated into it: The Field Museum of Natural History, the Shedd Aquarium, Adler Planetarium, and Soldier Field on site, and the Art Institute, not adjacent to site, which housed the fair's art exhibit. Other Residuals - Northerly Island, development of the marina in Burnham Harbor, and adjoining parkland

After fair closed in 1934, buildings from the Colonial Village and six demonstration homes from the Home Planning Group were relocated. As of 1997, only the replica of the Old North Church (Boston) still stands from the Colonials. Of the six demonstration houses, five remain, the Arco-Ferro Mayflower House, the Cypress Log Cabin, the Florida Torpical Home, the House of Tomorrow and the Wieboldt-Rostone House on the grounds of Indiana Dunes National Lakeshore. In addition, the Museum of Science and Industry still has exhibits from the fair, including the Coal Mine.

Rufus Dawes was the President of the exposition. Lenox Lohr was the General Manager. 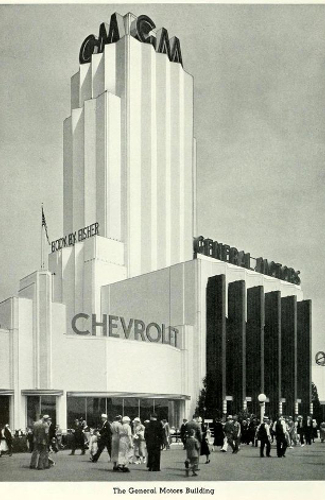