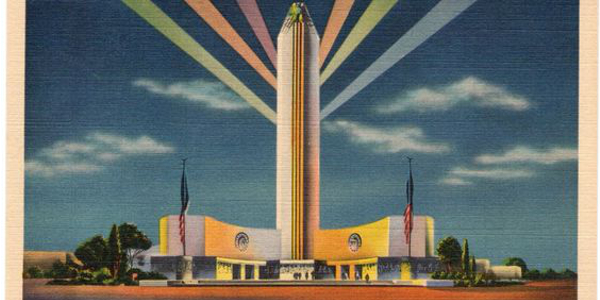 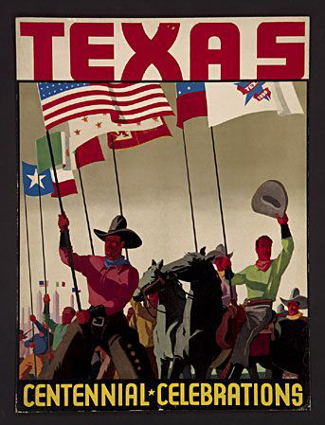 Sanction and Type - Unsanctioned by the Bureau of International Exhibitions during the first decade of the Bureau. Suggests a recognized event of Special theme such as those held on the 2-3 year or 7-8 year of the decade in today's BIE terms despite acreage above the current BIE limits for that style of expo. Despite minimal international participation in the first year, a House Joint Resolution 293, asked for $3 million, authorized the president to invite foreign participation in the Texas Centennial Exposition, and created the United States Texas Cententennial Commission and U.S. Commissioner-General for expo. President Roosevelt visited the fair. 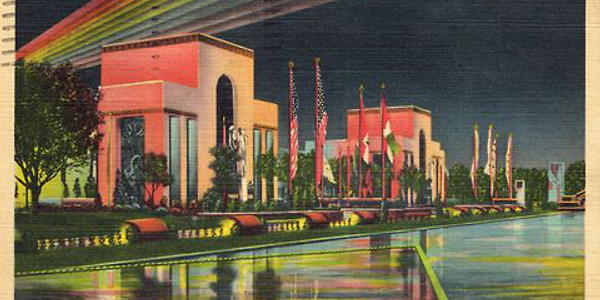 It was unique, Texas style, celebrating the storied past of Texas with a nominal attempt to add international flavor to the event, particularly during the first year. In the second, now known as the Pan American Exposition and not the Texas Centennial, they achieved more of that, however, for many world's fair historians, they might not consider this a true World's Fair. But there's no doubting that the Texas Centennial Exposition or its second year Pan American, didn't achieve most of their goals. The original expected attendance of four million was surpassed. They built a permanent legacy of Art-Deco structures that still, for the most part, stand in Fair Park. And they were, for the first time in world's fair exposition history, air-conditioned. There was competition as an unsanctioned fair in the first decade of the Bureau of International Expositions, both from sanctioned and unsanctioned events. San Diego had extended their event into 1936. Cleveland was hosting an unsanctioned world's fair during both 1936 and 1937. Brussels 1936 and Paris 1937 were starting the official BIE World's Fair timeline. But none of that stopped the organizers of the Dallas Texas Centennial from their grand vision. You can still see a lot of it in those legacy buildings that surround the Cotton Bowl and the Texas State Fair.

Dallas had been chosen as the site of the Centennial in September 1934, giving it little time to mount the fair. But they did, transforming the State Fair of Texas complex with $15 million in new construction on the site. There would be seventy buildings at the fair. The Dallas expo was touted for its three features, as the New York Times put it, cattle, cotton, and oil. Its history from 1519 forward would be traced in a spectacular known as "The Cavalcade of Texas." It included a variety of backers and exhibits. Niemann Marcus was an original underwriter of its financing. AT & T became the first major exhibitor to sign on. Other exhibitors would include Westinghouse, Standard Brands, Kraft-Phoenix, Beech-Nut, Dr. Pepper, and Texaco and Gulf Oil. General Motors, Chrysler, and Ford were also there.

Although the bonds were not all paid back to its backers, the Texas Centennial was considered a flashy success. There was an official loss of $2,888,852, but the overall impact of the fair was huge. Fuel tax revenue in Texas rose $9.3 million in 1936-7. Hotels and railroads saw a 35% increase in traffic. Wholesale sales rose 22 to 40%. Prior to opening day, two million tickets had been pre-sold. They would get more than six million during the first season, half again as many as had been predicted at first, although Texas large pride thought that ten million might attend. Including the second season, they got close. Heat in the 1936 summer, reaching well over one hundred degrees, and a smaller fair in Ft. Worth are said to have curbed attendance. Money was spent on the permanent structures to become legacy on the site, not only from the expo authority, but also the city. They would have legacy impact.

Gaylon Polatti - "The Texas Centennial Expo was certainly given national press coverage, because of its very active publicity department (and because Daniel Roper attended the opening, followed later by Franklin Roosevelt, John Nance Garner, and others). I do not think though, that national pride (outside of Texas, that is) was a factor. The Pan-American Expo, though of a broader scope, really stirred no more national interest (if as much) as the Texas Centennial. The Media Department of the Centennial, as evidenced by its files here, wrote dozens of stories and submitted them (or subject-specific variations) to literally hundreds of different news sources. Media coverage (print and radio) was intense in Texas (because many of the Expo's boosters were owners/managers of the media). The '37 fair seems not to have had nearly the level of support or funding that the Centennial had. Funding in 1936 came from the City of Dallas ($9.5 million), the State of Texas ($1.2 million for the States of Texas Building - today's Hall of State - and $.5 million for publicity), and the U.S. Government ($1.6 million). Though it took a great deal of politicking to get this together, it was an easier process than what occurred in 1937. While the '36 exposition expanded Fair Park's acreage, I'd still only call the Texas Centennial a specialized fair, given its scope. The Pan-American Expo is more difficult to define. It may be of the 1st category, since other nations built exhibits (nothing so large as a pavilion, however). Still, the physical plant was not expanded (indeed, it had lost a few buildings, most notably the Hall of Negro Life.)"

Karen Shopoff - "The U.S. Government sponsored a building for Fair Park, whose iconography included an emblematic bald eagle and a frieze of historical events of federal significance that had occurred in Texas. Fair Park in Dallas is the largest collection of TRUE art deco architecture anywhere. The designers had a vision that matched Texans' identity-- a blending of old and new, historicist and modernist. They were able to pull off a both/and style of architecture without appearing jumbled or tentative. The fairgrounds in Fort Worth were much more of a moderne streamline style-- suitable for the image they desired. It is not as confident, however, as the full-blown deco in Dallas. World's Fairs have always been testing grounds for architectural style, but the thoroughness with which these sites were planned parallels the architectural achievements at the Columbian Exposition. The only event that affected peoples' mindset was the Great Depression. The fair organizers were well-aware of the economic state of the region and the nation while planning the fair, though. If anything, the desire for a steady job and a social escape during the bleakness gave a positive light to the fair. Again, not an unpredictable event. The bonds that were issued to finance the Dallas fair lost money. The public reaction to the fair, however, was so positive that the financial loss did not upset too many people. There was no public demonstration against the event or its cost." 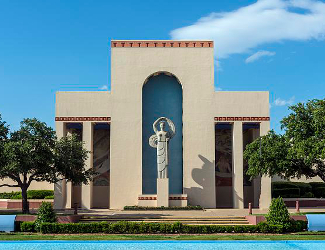 Note: It is sometimes difficult to tell whether certain nations or exhibit representatives actually participated in a significant way. That may be especially true with an event with a nominal international exhibit scope. Newspaper reports as well as the official guidebook may indicate participation, whether official or unofficial, when actual participation did not occur, or occurred minimally. Take the above as a guide, not gospel.

Hall of Negro Life located halfway between General Motors Building and Museum of Fine Arts on the main thoroughfare, and attracted 400,000 fairgoers, 60% white. Hall of Negro Life was demolished for the 1937 Pan American Exposition season, under reason of needing space for building of Pan-American exhibits. It was the only building demolished.

The amusement section of the fair was a quarter mile strip in the east sector of grounds. It included the Black Forest concession, a German village with large restaurant, an ice show skating rink, rathskeller, and shopping center. Other foreign concessions included an English Village, the Old Nuremburg Restaurant, and the City of China plus Admiral Byd's "Little America"; The Holy City; and Life, the story of man and creation. The State Fair roller coaster remained, but there were few other rides.

Legacies
An additional twenty-six and one half acres were added to State Fair Park complex by the exposition. Sixty percent of buildings had been designed for post use as permanent museums and exhibition halls. Today, thirty buildings remain, including the Hall of State (Dallas Historical Society), the Old Mill Inn, Magnolia Lounge and Hall of Religion, Museum of Nature and Science, Museum of Natural History, and the General Motors Building (Music Hall). The Cotton Bowl remains; it had been built prior to the expo in 1932. 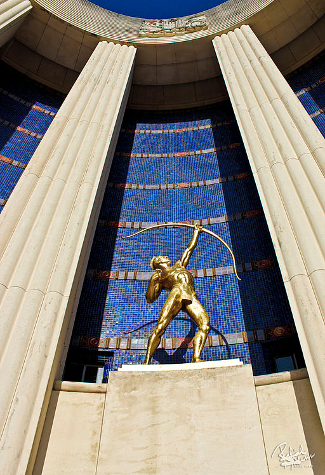 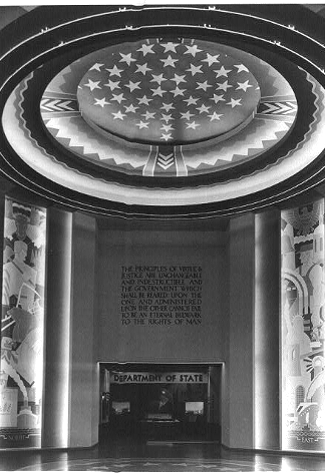