Site Acreage - 367 acres on what is today the Hampton Roads Navy Base.

Sanction and Type - Prior to the Bureau of International Exhibitions. Would be considered a Special Category, Registered event today like those on the 5 years of the decade. Exhibition itself was unauthorized by Congress to be international, however, the International Military and Naval Celebration was international, approved by Congress, who solicited foreign participation in that section. The exhibition and celebration were two different items. Congress did approve funds for both, as far as their participation goes. There were international exhibits, despite the Congressional designation. The expo was run by a private authority. 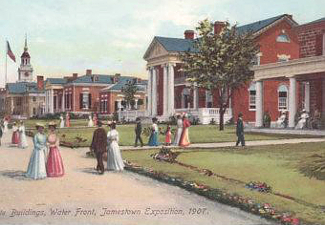 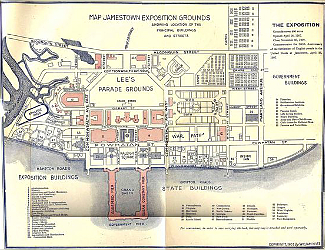 It's odd in a way that the Jamestown Ter-Centennial Exposition was in some ways not considered international, due to Congress, although it had international exhibits, and it is considered a failure due to the losses incurred, $2,450,330, and the failure to gain many visitors. Just over 1.4 million paid with 2.8 million total attendance during the expo days. But in many ways, if it were measured in the way many modern fairs are, in the legacy and what was left behind, it would be a success. The expo grounds, picking up on the Navy theme that was prevalant in many exhibits and celebrations, became part of the core of the now four thousand acre Hampton Roads, Norfolk, Navy Base. Buildings remain and are in use. It expanded the economy of the region to this day. So, yes, the fair was a failure in the attendance and profit arena, but it provided a seven month celebration of the three hundredth anniversary of the founding of Jamestown, i.e. the founding of Virginia, celebrated the army, navy, and marines, and has had a lasting impact. Not bad.

The idea to hold a fair had started in 1900 with the Association for the Preservation of Virginia Antiquities called for a celebration honoring the first permanent English colony in the new world. That was a good idea. However, site selection became a problem. Most thought Richmond would be chosen as Jamestown itself had no facilities. Then James M. Thomson's Norfolk Dispath proclaimed on February 4, 1901 that Norfolk should host, which Norfolk City Council agreed to in September. The Virginia Assembly and President Roosevelt endorsed the idea, with Congress appropriating funds. Then came the logistical problems and bad weather. 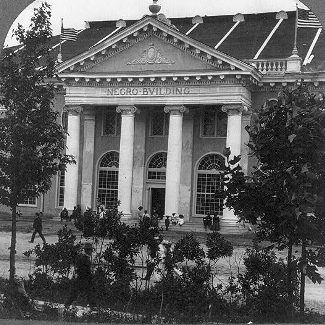 Despite the problems, there were successes. The Negro Building was impressive, as were the permanently constructed state buildings, including Pennsylvania's replica of Independence Hall. Exhibits for Pennsylvania included H.J. Heinz, Cambria Steel Company, Aluminum Company of America, and the Westinghouse Machine Company of Pittsburgh. There was the Powhatan Oak, from which Chief Powhatan supposedly ruled and the military pageants, which ran for much of the expo period. They were engaging. There was even a replica battle of the Monitor and Merrimac. Most impressive display may have been the ships of two squadrons, which were always moored off Sewell's Point, including sixteen battleships, five cruisers, and six destroyers.

As stated at the start, the Jamestown expo can not be considered a success when compared to other national and international expositions. It was poorly managed. The fair construction was always behind schedule, had drainage problem, poor roads to the site, and when opening day, which was well attended, showed unfinished exhibits and limited electricity, including an unfinished Warpath amusement zone, the patrons who came were disappointed, leading to adverse publicity. How far behind were they? The buildings on opening day did not have electric or water, so they weren't dedicated. The History Building was not ready until August 12. By the end of the expo, recievers were appointed to take charge of the affairs. 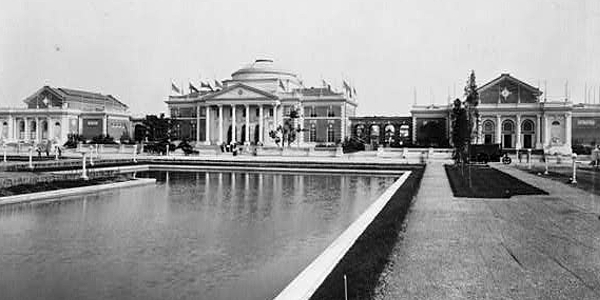 Joseph Judge - "The 1907 Jamestown Exposition occured at a time when the United States was determined to exercise a greater role in world affairs. The country had won the Spanish-American War and President Roosevelt was preparing to send the "Great White Fleet" around the world as an unsubtle advertisement of American sea power. Part of the development of this "new" United States was the confirmation of a mythic view of American history. Americans wanted to be reassured that the country was different from any other that had existed. They wanted to understand that something special happened in 1607 when the English established their first permanent settlement at Jamestown. President Roosevelt had a greater than average interest in the Exposition, visiting it several times."

"The Jamestown Exposition Company, an entity set up to run the fair, was in state of financial distress when the fair opened. Initial capital was difficult to raise, and the area economy was not diverse enough to provide real economic might. Government money had been spent almost immediately. Patriotic organizations were relied on to construct exhibits that otherwise would have gone undone due to lack of money. Overall the Exposition was a financial failure, and the site itself did not attract development as the organizers naively hoped. Financial disorganization is also reflected in the fact that over one-half the recorded admissions were free. Another factor in the financial failure of the exposition might have been the location. While other fairs of that era were located in large population centers, the Jamestown Exposition was in part of Virginia with a population of barely 200,000. This was not sufficient to support the Exposition. The Exposition lost at least 1 million dollars." 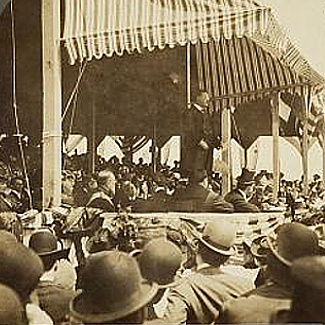 Thousands saw President Theodore Roosevelt open the exposition on April 26 with warships booming their salutes and many ambassadors and diplomats in attendance.

Legacies
The site of the Jamestown expo became part of the Hampton Roads Navy Base after World War I. On June 28, 1917, President Woodrow Wilson bought 474 acres for the base, including 367 acres of the exposition grounds. Over a dozen of the state buildings remain on Admiral's Row; Pennsylvania, Virginia, Georgia, Maryland, Missouri, North Dakota, Ohio, West Virginia, Delaware, Connecticutt, New Hampshire, Michigan, North Carolina, Rhode Island, Illinois, and Vermont. They are predominantly used as admiral's quarters; some of been altered and even combined. The Baker's Chocolate Company, Mother's and Children's Building, History Building, and Auditorium are still there. The base had since been expanded to over four thousand acres. Today, the Hampton Roads Naval Museum has many exhibits devoted to the Jamestown 1907 exposition. 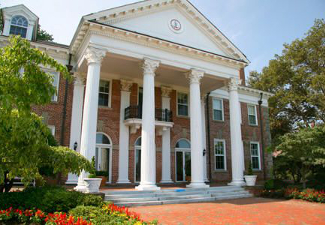