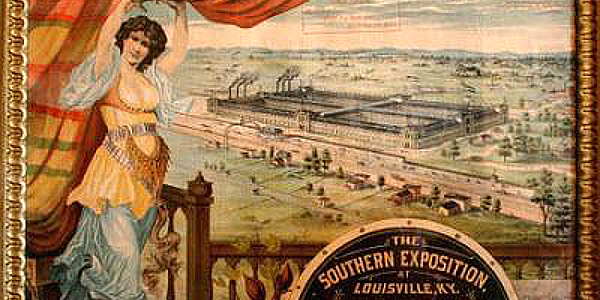 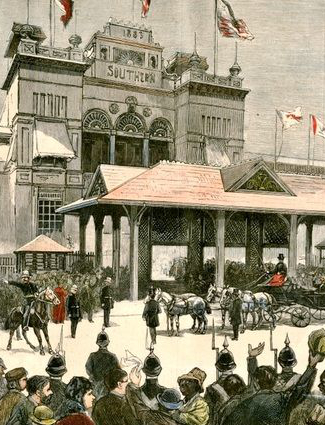 Sanction and Type - Prior to the Bureau of International Expositions. Would be considered a Recognized Expo with Special characteristics like those on the 2-3 or 7-8 years of a decade. 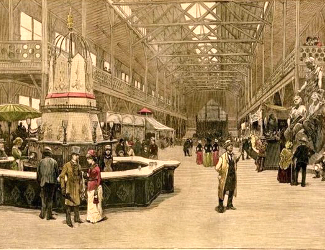 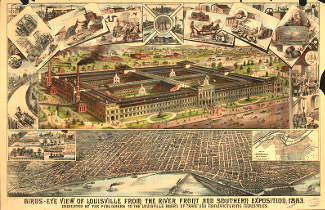 Was it a World's Fair? Was it a national exhibition? Was it a regional exhibition? Well, you could make the case for all three, however, the Southern Exposition, especially in its first of five years, had most of the trappings of a true, three month long world's fair. It was the largest exposition held in the United States since the much larger Philadelphia Centennial Exposition 1876, and with backing from the federal government, including an eventual opening by President Chester Arthur, Louisville's Southern Expo had cache. Its predominant cache was about promoting southern industry and gaining the southern market after reconstruction.It did that, as well as prompt urban development. Its subsequent years suffered in comparision, although the four year runs of Southern expos continued to 1887. We would not, however, describe those years as being World's Fair in the traditional sense. Not enough international. Not a long enough duration. Not enough attendance.

Louisville had a minor history in hosting former expos on a regional scale. Since 1853 through 1860, a series of mechanics fairs by the Kentucky Mechanics Institute had been held. The Louisville Industrial Expositions then came into the forefront for ten seasons after the Civil War. The idea to host the Southern Exposition, and make it nominally international, sprung into action in 1881, although the first steps to the actual fair did not occur until October of 1882. It would be Southern in enterprise, but open to international exhibits. There would be a main Exhibition Building plus a separate Art Gallery and small Music Hall. An agricultural exhibit would be held on ten acres.

The main building, two stories, would include five sections among its 928' by 628' space; Natural products, machinery, manufactured products, transportation, and music, art, and literature. The building would be lit at night by Edison's company with incandescent lights and the exterior with Jenney arc lights. The scene at night with those new lights was the most remarkable feature of the fair. 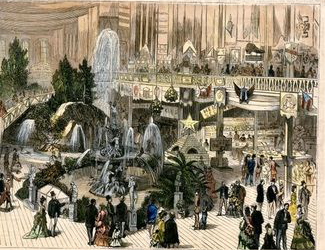 The fair in 1883 was a success in its vision. It attracted national attention, the President, and forced the rest of the nation to consider Louisville, once again, in the same breadth as St. Louis and Chicago which had surpassed it in the recent decades. Drawing nearly one million visitors, the newspapers urged its continuance. It lasted for four more years, although none of those years quite reached the pinnacle of 1883. But that was not its purpose. It achieved the goal of prompting building construction in Louisville. The fairgrounds, which had been in an empty section of town, were now surrounded by housing.


Clyde Crews - "The U.S. President came to the official opening. Contemporary press accounts remark on intense competition with Cincinnati over the exposition. In the era after the Civil War, Louisville wanted to emphasize itself as a southern city. (It has been called the only town to join a cause after a war was over). By contrast, when Emerson visited in 1850, he was touring the west. So the exposition made special commercial sense for a city that wanted to keep southern trade (at its major catalog houses, for example). The key word here was Southern and it came soon after Atlanta's Cotton Exposition. Good rail lines. Louisville was the rail head for the South via the L&N RR."

George H. Yater - "After it opened there are memoirs of people who were there, after there was tremendous on part of public in Louisville. Diminished in succeeding years, continued for five years, 1887 was last year. Expo authority arranged for special trains for special fares, from surrounding states, to bring there at special rates, even paid their fares. Published all kinds of brochures, newspapers full of stories about it. President of U.S. speaker at opening. There was great interest from the public (after it opened). At times gates were closed because there were too many inside already. Media publicity after opening day, stories every day. New ideas there was Edison locomotive that pulled electric powered train around, electric lights, new with electric transmission and railroads, one called Judge. Chicago Railway exposition showed Judge first, then brought to Louisville, it was electric powered through rails. Largest installation of incandescent lamps up to that time. Lot of odd things, incubators. Very applicable (theme), used to stimulate Louisville industry, for Louisville machinery, particularly to the South, lot of publicity. Overall appeal, (folks from) Indiana came to the fair. They had tracks that took you right to the fair. Edison people was not only putting in electric lights, but generators and steam engines, and they were not ready for opening day. All lights could not be turned on for couple of weeks. "

Kramer - "President Arthur opened the Exposition in 1883, but the event's impact was more regional than national. The Exposition appears to have received great media and public attention before, during, and immediately after it opened, and its impact received favorable media review after its closing. But reaction between 1884 and 1887 appears to have been somewhat superficial. The fair contained ideas and concepts new to Louisville, but not to the larger eastern cities. The consistent theme stressed the importance of establishing Louisville as the Gateway to the South and expanding the city dominance in that region. It was short sighted, given that Louisville already traded more extensively and more profitably with the North, Northeast and West. But popular perception favored the South. The project was initially funded by state subscription, then by gate receipts. Over 770,000 paid guests attended in 1883." 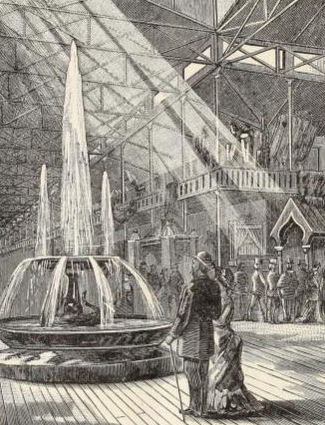 Note: It is sometimes difficult to tell whether certain nations actually participated in a significant way. Newspaper reports as well as the official documents or secondary sources or even the Bureau of International Expositions itself may indicate participation when actual participation did not occur or occurred minimally. Take the above as a guide, not gospel.

Expo Tidbits
An electric railways carried visitors on a narrow track around Central Park, including a lit tunnel. It was a forerunner of the electric trolleys that came to Louisville six years later.

New York Times reported on August 1 that the "The Show at Louisville" was incomplete, but will be done in a few weeks. They criticized the expo for not focusing on the main industries of Louisivlle, tobacco and leather. They noted that Louisville could lodge 15-20,000 per day at reasonable rates.

There were more than 1,500 exhibitors at the 1883 Southern Exposition.

It was touted as the only great exposition (up to that time) that was fully lighted in every part at night by electric lights. The exhibition hours were 9 a.m. to 11 p.m.

There was no charge for exhibit space.

The fairgrounds were located two miles from the center of Louisville and connected by the Central Passenger Railway.

Legacies
In 1890, the expo site was turned into the St. James and Belgravia courts, a now historic housing district. It was also the site of the fountain which had stood inside the exhibition building, but has now been replaced with a new one. A new Auditorium was built with three thousand seats; it was erected with the material salvaged from the Southern Expo building. That building no longer stands.