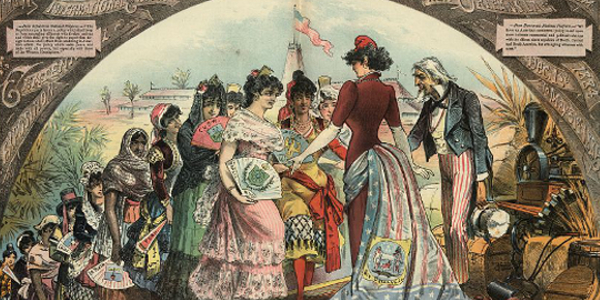 Sanction and Type - Prior to the Bureau of International Exhibitions. Would be considered today a Registered Event of the smaller kind like those held on the 5 year of the decade. Congress did support the exposition and invite nations to participate. 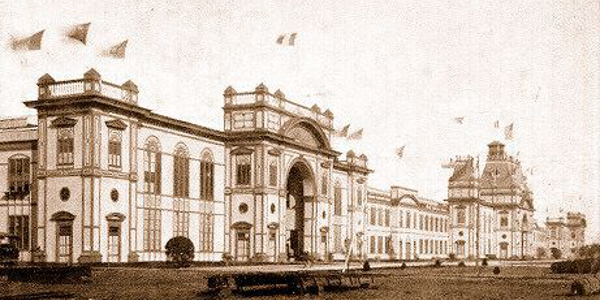 With the success of the Centennial Exposition in Philadelphia eight years earlier, proving to the world's the emerging industrial might of the United States, various cities around the U.S.A. began to prepare exhibitions that would show the world their industrial strength. In the south, the New South movement was urging a cessation of their sectional differences and movement toward commerce. For New Orleans that commerce certainly centered around cotton. One third of all exports of cotton in the United States went through its port. So when the city leaders decided to host the World's Industrial and Cotton Centennial Exposition in 1884 and 1885, the theme was a natural (one hundred years earlier the first bale of cotton had been shipped from America to England) and they were going to do it up big. They built a main exhibition building which measured 1,378 feet by 905 feet, thirty-three acres under roof, the most extensive up to that time. They built a Horticultural Hall, at 600 feet by 194 feet, that was the largest greenhouse in the world. Newspapers touted the exposition as the biggest event held in the south since the Civil War.

Unfortunately for the exposition, those big ideas and big pavilions were put in jeopardy by mismanagement. It was constantly in financial turmoil, which prompted a late opening and incomplete buildings and exhibits. Even into 1885, the fair was not complete. In January, there was still only one working comfort station. The troubles caused bad press. The bad press dampened attendance, reaching nowhere near the estimated four million. It did have an unintended consequence. The fair actually spurred the tourist industry of the city, prompting journalists disappointed with the expo to wander around the exotic features of New Orleans, from the wharf district to the French Quarter, and report positively on that. How corrupt was the management. Well, E.A. Burke, the Director-General, would eventually embezzle $2 million in state funds and have to flee to Europe. How well do you think he was running the fair? Well, judging by the construction standards of the private hotel he was building for the fair, Burke's Hotel, it collapsed before opening. Judge for yourself. 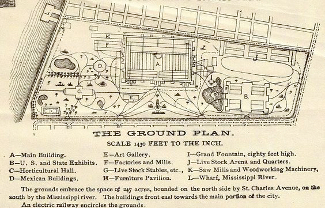 Now the fair itself had positives. In the U.S. Government Building, a giant globe, 50 foot tall depicting the earth, rose above the exhibits. Inside, alcoves had displays from U.S. consulates around the world, with conceptual axis furnished by Smithsonian ethnologists. The Women's Pavilion was headed by Julia Ward Howe, author of the "Battle Hymn of the Republic," and during some of the fair run, the Liberty Bell was exhibited. Mexico had the best foreign exhibit, spending $200,000 on its own building and exhibits in the main hall, although to be fair, the other international exhibits were not deemed that highly, many represented by private firms and not official. In the end, the bad press just continued to pile on. Attendance began to climb toward the end of the first year, prompting thoughts of a second season. It did open again, as the "North, Central and South American Exposition." They did not fare any better.

Matthew Esposito - "National pride exhibited among Americans attending the fair was spotty and unsustained until the arrival of the Liberty Bell in 1885. European attendance was too sparse to render any educated judgment. Among Mexican nationals who participated in and attended the New Orleans World's Cotton and Industrial Exposition of 1884-5, national pride soared to unprecedented levels. Organizers of the 1884-5 fair fell behind scheudle and the fair was not ready for opening day, generating some criticism. But since the fair's director was also the editor-in-chief of the Times-Democrat newspaper, jounralists downplayed this in the media. New Orleans made significan advances from a southern, backwater port-town to a principle transportation and shipping depot during the late-nineteenth century. Despite fledgling attempts to popularize Mardi Gras, the New Orleans expositions were the first large-scale events that attracted visitors by the millions. Lack of funding forced the fair leadership to solicit congressional funds. The fair would have been aborted in the last minute if congressional money was not forthcoming."

Sam Shepherd - "The departments devoted to Women and African Americans were not entirely new but seemed to be novel for world's fairs. They received very favorable reactions. Bad weather crippled the fair early and could not have been anticipated. A minor depression limited the ability of many people to travel to New Orleans and a streetcar strike hindered travel within the city. Railroads failed to grant special excursion rates, too. Most of these problems could not have been foreseen. On the other hand, officials mismanaged the fair. Lacking resources and planning, many exhibits were not ready for the first few months of the fair. The 1884-1885 fair provides a testimony to the importance of planning. Despite the mismanagement, the fair itself offered enough novelty and variety to earn favorable commentaries by those who attended. Had the organizers planned better, the exhibits would have been ready at the beginning and more people would have attended. For New Orleans the fair amounted to a missed opportunity."

Expo Tidbits
The Main Building had a Music Hall in its center that was capable of seating 10,000.

Daft Electric Railway ran between the Main and Government Buildings with 1 or 2 cars running all day.

Pillsbury Flour had its own colorful pagoda inside the Main Exhibition Building.

Legacies
There are few remaining legacies of the fair, although much of the site is now within the acreage of Audobon Park, five miles from the center of the city. Horticultural Hall remained until a 1917 hurricane damaged it. Other legacies include a mule car ticket office, now a residence, and the Bankers Pavilion, part of Poplar Grove Plantation in Port Allen. Venezuela brought along the Water hyacinth, which now floats in many of the waters of Louisiana. There is also an iron ore boulder on a golf course that was part of Alabama's exhibit. 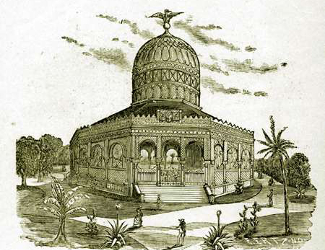