Sanction and Type - Prior to the Bureau of International Exhibitions. Would be considered a Special style Registered event today like those on the 5 years of the decade, although lower international participation could indicate a more special, recognized event. Government authorities recognized the expo on June 10, 1896 and donated $200,000 plus $40,000 for the Indian Congress. 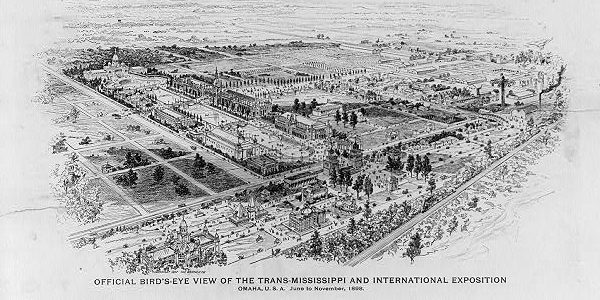 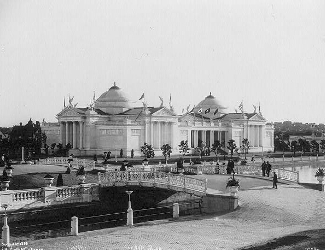 Ambitious considering Omaha was only forty-four years old, far from the international cities in scope and style that had hosted World's Fairs to this point, whether that be the European capitals of London and Paris, or the more cosmopolitan cities of the United States; New York, Philadelphia, Chicago, and San Francisco. Architecturally, the non-permanent structures were magnificent. Built in Renanissance style, without towers, the staff structures were ivory white in color with gray green roofs. 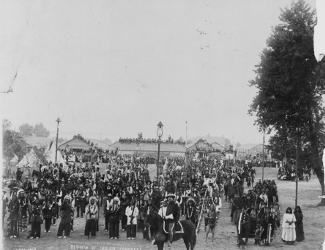 The idea for the fair had been germinating for several years in cities of the midwest. Prompted by the success at Chicago in 1893 and San Francisco in 1894, various cities made their case for an exposition that would push forward the Trans-Mississippi states of the midwest, including Kansas City and Denver. In fall 1894, the Trans-Mississippi Congress held its annual session in St. Louis, and decided to meet in Omaha the next year. At this meeting, the Nebraska delegation presented a resolution to hold an expo in Omaha on the progress of the Trans-Mississippi States, which was unanimously approved, thwarting the efforts of the other cities. At first, the scope was to be regional, but it expanded to included all of the United States, plus foreign exhibits.

One of the most unique and important aspects of the Trans-Mississippi was the inclusion of the Indian Congress. Appropriated for by Congress, the Indian Encampment encompassed four acres on the North Tract. The tribes represented included the Wichita, Kiowa Apache, Sioux, Crow, Omaha, Flathead, Sac, Fox, Tonkawa, Apache w/Geronimo (who charged 50 cents per autograph and $1 for pictures), Blackfeet, and Pueblos.

The Trans-Mississippi had good success for an expo held in such a small and new city (1900 census showed 102,555 in Omaha, including suburbs a total of 160,917), paying back its stockholders at a rate of 90-95% and putting on an international show that may have surprised the Eastern elite. Despite the Spanish-American War and the difficulty in overcoming the Economic Depression of 1893 and drought the two years after, it built a magnificent temporary city to host the nation and world. City leaders thought it represented the city well with "far-reaching" benefits.

It was decided that a second year expo would be held after closing day. This fair would not attempt to be international, but remain regional and colonial in scope, focusing on the new territories won during the Spanish-American War; Cuba, Hawaii, Puerto Rico, and the Philippines. The Greater American Exposition was held for four months, but faired poorly. Without Federal Government participation or the backing of the railroads, the fair only drew an additional 725,000 with up to half coming on free passes.

Gene Mueller - "Omaha had become a major railroad centre by 1898. While the exposition left Omaha with much pride of accomplishment its impact on the National Pride was relatively minor. The T-M Exposition was forced to compete with the Spanish-American War for national media attention. This applied to the two months prior to opening day and the first two months of the exposition season. The progress of the states west of the Mississippi River (main theme) and the Indian Congress. These were both first with the T-M Expo. Much emphasis was placed on the agricultural aspects of the T-M Region. Since this was the backbone of the regional economy it had much appeal.

The Spanish-American war diverting national attention and extremely hot weather in Omaha during the summer of 1898 (was unforseen problem). An event this large was definitely a first for Omaha, which was only 44 years old in 1898. This was probably the main reason why the exposition had difficulty with attracting international participation. State and Federal appropriations were less than the sums originally requested which helped to limit the exposition budget. The exposition officials did very well with what money was made available to them by private subscription. Even though the exposition officials had hoped for more international participation (China, Mexico only official foreign, others (15) from private sources in those countries) it was viewed by many Easterners and the European Governments as a regional exposition." 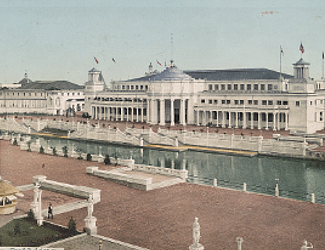 Additional States and Territories
31 States participated, 9 with their own buildings, 22 without.

Expo site was 184 acres, irregular in shape, within the city limits of Omaha, and twelve minutes from the business center by one of three lines of electric trains.

Venetian gondolas took passengers to and from buildings in the Grand Court.

North tract included the Live Stock exhibit, West Midway attractions of the Giant See-Saw, Shoot the Chutes sporting ground, Scenic Railway, Wild West Show, Old Plantation, the Cyclorama of battle between the Monitor and Merrimac, the Streets of All Nations, Hagenbach's Wild Animals, Glass Blowers, and the Fall of Babylon. It was also the location of the Transportation and Agricultural Implements Building, Live Stock Exhibit, and the Encampment of Indians.

Legacies
The site of the Grand Court of the exposition is now Kountze Park, but the only remnant is a monument, erected in 1998, and sign commemorating the event. 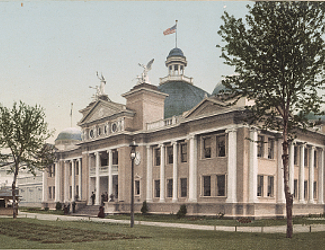 Sources: History of the Trans-Mississippi and International Exposition of 1898; Trans-Mississippi Calendar of Events; All the World's a Fair; New York Times; Historical Dictionary of World's Fairs by Alfred Heller; Fair News. 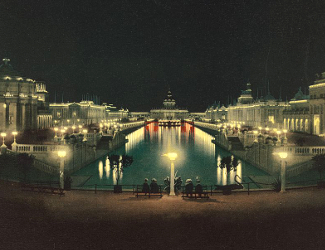