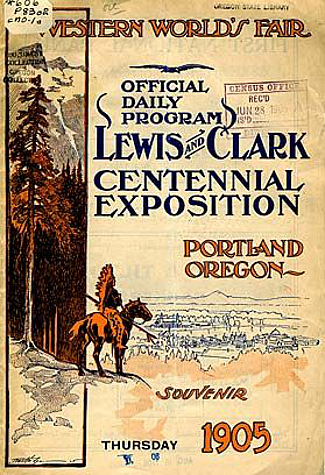 Total Cost - Total Expenses for Fair Authority $1,440,194. Estimate of $5 million, including all participants.

Sanction and Type - Prior to the Bureau of International Exhibitions. Would be considered a Special Category, Registered event today like those on the 5 years of the decade. Not officially authorized by Congress, although there was an appropriation of $400-500,000. There were no formal invitation to governments from Washington, but fair was a bonded warehouse.

Ticket Cost - Admission to fair was 50 cents for adults and 25 cents for children, with additional charges for Trail attractions. Season passes, non-transferable season type passes, ticket books, 137 tickets, picture required, could be purchased for $20, or 50 tickets for $12.50. 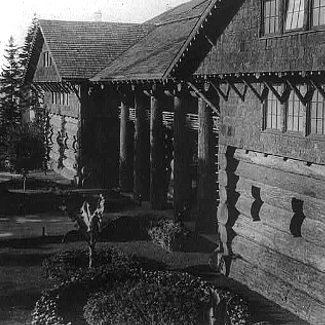 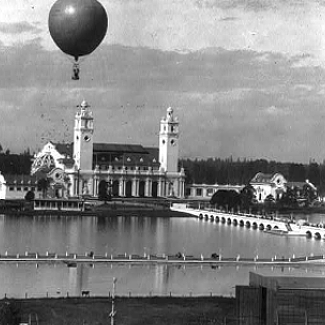 It was the 100th anniversary of Lewis and Clark's expedition and Portland was going to celebrate. Held on four hundred and two acres with vibrant views of Mount Rainier, Mount Hood, and the Cascade Mountains along the Willamette River, the exposition brought attention to the Pacific Northwest, a region unknown to most United States residents, outside gold rush news. The United States hosted over twenty foreign exhibitors as well as over a dozen states. The fair celebrated an amazing transformation in the western United States since the frontier days of Lewis and Clark's adventure. The fairgrounds themselves, designed by the sons of Frederick Law Olmstead, were located two miles from the center of Portland, reachable by an electric car ride of eighteen minute duration. Acres of water abounded with a Bridge of Nations, one thousand feet long, that traversed it to the United States Government building on an island.

But the Bridge of Nations was only one of the grand courts and boulevards that spread about the site. There was the Colonnade Entrance where the public entered, the Pacific Court inside it, Lewis & Clark Boulevard serving as the main avenue from northeast and southwest and holding the principal buildings. There was Benton Plaza, Columbia Court with sunken gardens, the Sacagawea Fountain, Monroe Court, Jefferson Court, Washington Avenue, Montana Avenue, the Plaza of States, and more. 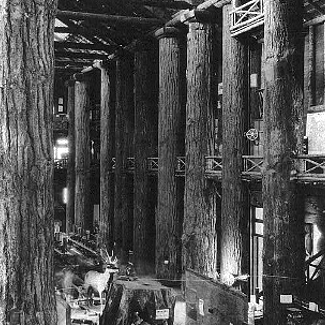 Concessions abounded with seventy-five souvenir stands, fifteen ice cream and soft drink stands, and twelve restaurants. An inn was built on the site, called the American Inn. It had five hundred and eighty-five rooms, costing $1.50 to $7.00 per night, depending on the European or American plan chosen. Five thousand other rooms were available at new frame hotels within walking distance of the fair; the Detroit, Fairmount, and the Outside Inn.

While the fair had some labor problems and trouble getting Asian governments to participate, plus early damp days that caused the fair authority to change some ticket practices, it succeeded, turning a profit of $84,840 and paying a dividend of nearly 40% to the stockholders of the corporation. The fair had a substantial impact of the economy of the city, spurring investment and turning the fairgrounds after it closed into a warehouse and industrial center. It build self-esteem and private fortunes. It is said that Theodore Wilcox, a grain and flour exporter, increased his fortune by $2 million. Today, the annual Rose Festival is considered a fair residual.

Mike Cramer - "Even before fair opened, the reaction in Portland was excellent, everyone got on the band wagon. Even the media was pretty positive. The exposition authority got the message out pretty well, mainly because the 1st president was also the president of the Oregonian newspaper, and it was well built up. The Lewis and Clark Journal was published for a full year before fair opened. After the fair opened, the public reaction was excellent, it was million and one-half paid admission, pretty darn good. Portland day itself had 88,000. Forestry Building was around for 59 years. The exposition was the biggest news event ever to hit Portland at the time, very positive, after the fair closed a few things brought up. Media really lashed on to it ." 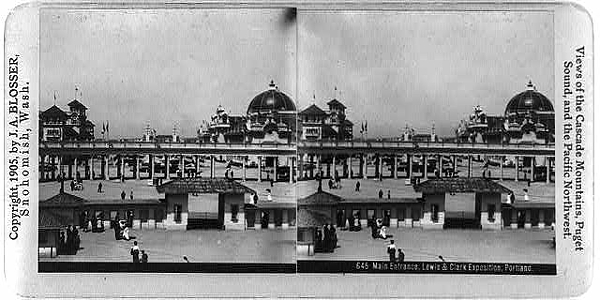 Lewis and Clark fair had the largest log cabin in the world, Forestry Building.

Motto of fair, "Westward The Course of Empire Takes Its Way."

The United States pavilion was the largest on site, 74,800 sq. ft., with two auxiliary buildings, 100 x 100 feet. It was situated on a peninsula jutting into the center of Guild's Lake. Buildings could be reached by crossing the Bridge of Nations or taking a ferry boat ride.

Legacies
Fair had substantial impact on the economic development of city, attracting investment, and creating a real estate boom. Guild's Lake was filled in and is now a warehouse and industrial district. No buildings remain. Forestry Building remained until it was destroyed by fire in 1964 and has been rebuilt in Washington Park. 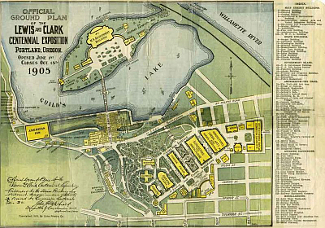