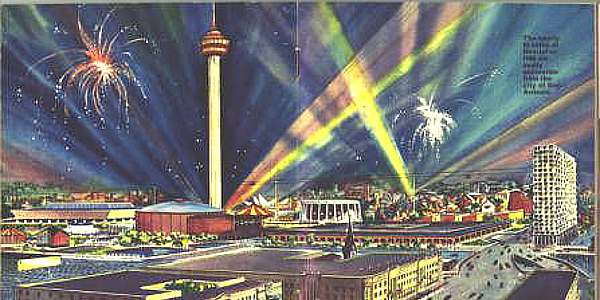 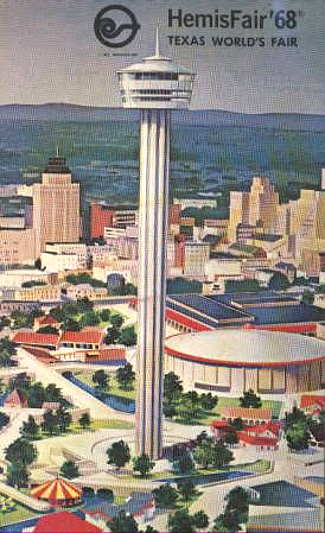 Sanction and Type - Sanctioned by the Bureau of International Exposition with registration on 11-17-1965 as a special cateogory exposition under the theme "The Confluence of Civilizations in America." Would be considered a Recognized "Special" event today like those on the 2-3 or 7-8 years of the decade. 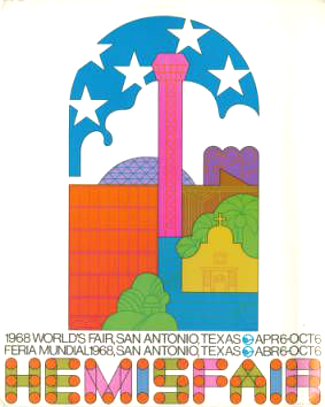 Hemisfair '68 was an ambitious enterprise. Hosted in San Antonio, an emerging, but still small city by world's fair standards, in the location of historic missions, including the Alamo, the small special expo was santioned by the Bureau of International Expositions on a theme applicable to its location, "the Confluence of Civilization in the Americas". If you don't think that was applicable to a Texas city, just ask the historic residents of the Anglo, Mexican, and Indian populations who graced the state during the two hundred and fifty years of San Antonio's existence. Yes, it also celebrated that.

The fair was appropriate in theme, hit its targets per exhibits, came close to attendance estimates despite unforseen troubles in the nation, and prompted a plethora of legacies that remain today on a well preserved site. The expo helped prove that a relatively new phenomenom, the world's fair as economic renewal, could be achieved. Walk in Hemisfair Park today and you will be greeted by the gleaming six hundred and twenty-two foot tall Tower of the Americas looming above you. Slide along the water of the channel that leads from the site to the San Antonio River and you can envision the tight ties between the past and this event, the first large scale international event hosted by the city. Other pavilions, many with more than a bit of renovation and facelift will be around the corner as well. 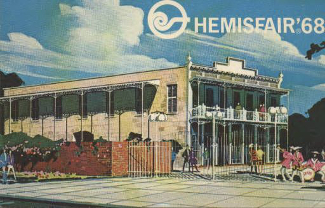 The site had three main zones; the International, Corporate, and the Convention Center. The Convention Center had a ten thousand seat arena, a two thousand eight hundred seat arena, and a one hundred thousand square foot exhibit hall. The two largest pavilions were the Texas and United States pavilions. Corporate pavilions included those representing some of the largest companies in the world; General Motors, Ford, IBM, Bell System, General Electric, Kodak, Coca-Cola, Pepsico, and Humble (now Exxon Mobil) oil. The site had a plethora of interior transportation options, including a mini-monorail, a Skyride, and Gondolas along the river extension and inland waterways.

Although the fair was very successful from an exhibit and theme standpoint and provided an economic legacy to the city, the fair had its problems, some that could have been foreseen, but many not. The social unrest in the nation, bad weather, and problem drawing visitation from outside the area (there were only 265,000 foreign visitors) kept the attendance slightly below the estimated 7.5 million. It also didn't help that the Montreal fair opened for another year in an altered state, but drew 12.5 million. Considering the challenges, that was actually a fairly good outcome. In the end, the fair authority had a deficit of $5-6 million, which was paid off by subscribers who had pledged to underwrite the fair if needed. It's always hard to measure that against the success of legacy, however, as the event spurred remaining structures, the renewal of the downtown, rescue of the riverfront, and a convention center. How depressed and dangerous was Riverwalk at the time? It was off limits to military personel from the area's military bases. Hard to believe that today. And yes, it put San Antonio on the map.

Terry Schupp - "This was LBJ's baby, held in his own back yard. He made sure the feds spent a lot of money on their exhibit and provided adequate PR.

From the outset, Hemisfair was intended to be urban redevelopment and an international expo. The plan was carried out nicely, and San Antonio was left with a rejuvenated downtown, a cleaned up symbot in the southwest (Tower of the Americas). The idea of orban renewal wasn't new (Seattle 62), but it became mainstream after Hemisfar (Spokane, Knoxville, New Orleans, Lisbon, Hannover). Montreal '67 - Building your own island with the dirt dug up to build the new subway that will serve the Expo ... need I say more? (Theme) It was a perfect place (Texas) and th perfect concept (an international expo for all the countries of the Americas). Since communist influence was growing in Latin America, it was the perfect time for a "Three Caballeros" kind of hemispheric solidarity pitch."

Matt DeWaelsche - "It provided an opportunity to showcase the city of San Antonio to the rest of the world and perhaps dispel stereotypes about Texas. The general public and local media for the most part were enthusiastic in their support for the fair. It seemed like it oculd have bee promoted more vigorously outside of the state of Texas than it was. One of the most innovative part of the HemisFair was the Youth Pavilion, Project Y. It featured music and interactive arts and crafts activities for teenagers. It was both popular and controversial. The fair was held in 1968 to comemorate the 250th anniversary of the founding of the City of San Antonio. San Antonio is an international city - over half the population is Hispanic - and participation by Latin American countries was very popular locally. The theme, "Confluence of the America," seemed especially appropriate.

Martin Luther King, Jr. was assassinated two days before the fair opened and Robert Kennedy was killed six weeks later. People were reluctant to travel because of social unrest caused by race riots and protests against the war in Vietnam. In addition, the summer of 68 was rainier than usual for San Antonio and bad weather kept attendance down." 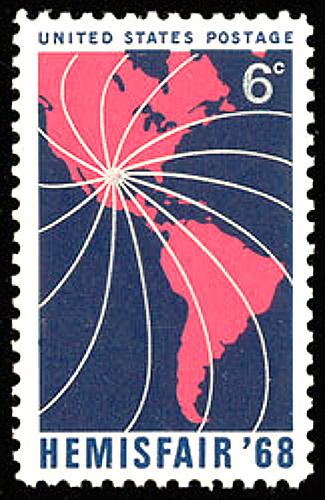 Expo Tidbits
What were some of the most popular pavilions? Spain and Mexico each drew about 3 million visitors. Total Tower attendance during run was 1,948,347.

Hilton's Placio del Rio hotel was built for the opening of HemisFair in 1968.

Legacies
One of the best sites for World's Fair legacies, starting with the Tower of Americas which still stands tall in the fifty acre preserved Hemisfair Park. The Convention Center, expanded since the fair, plus its theater and arena (razed in 1995 for convention center expansion) remained after the fair. Other buildings that remained, in various states of use, were the Eastman Kodak Pavilion, the Gulf Insurance Pavilion, Humble Oil Pavilion, Southern Baptist Pavilion, Women's Pavilion, and the United States Pavilion. The Mexico Pavilion is now the Mexican Cultural Institute. The Texas Pavilion, largest at the fair, became the Institute of Texas Cultures, now a musuem on the campus of the University of Texas San Antonio. 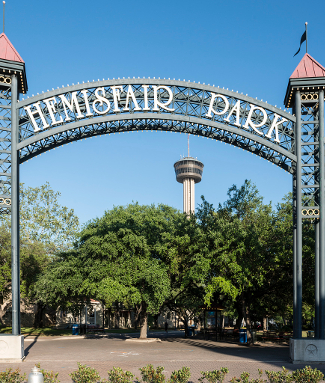 Photo column top: Official postage stamp of Hemisfair '68, U.S. Postal Service. Courtesy Wikipedia Commons. Bottom: Gateway to Hemisfair Park with the Tower of the Americas, theme structure for the fair, in the background, 2014, Carol Highsmith collection at the Library of Congress.