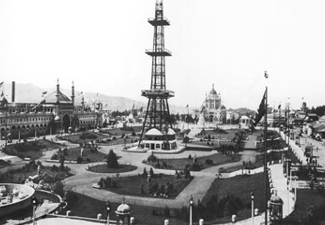 Sanction and Type - Prior to the Bureau of International Exhibitions. Would be considered a Special style Registered event today like those on the 5 years of the decade. There was no congressional approval. 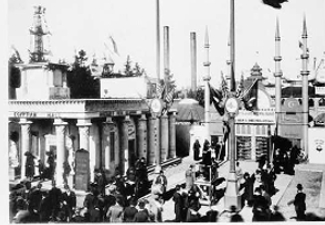 It was a small fair by comparison to the Chicago World's Fair of 1893 or other San Francisco fairs, but a successful attempt to parlay efforts in Chicago and promotion for the city of gold rush fever that was undergoing a depression. Michael H. De Young, the California commissioner to the World's Columbian Exposition, saw holding a fair just after the Chicago fair closed as an opportunity. He could bring some exhibits from Chicago, including the Little Egypt concession from the Midway plus international exhibits intact, and lay claim to hosting the first world's fair on the West Coast of the United States. There would be an Administration Building and four other main palaces on an axis around the Grand Court of Honor. And this would be a private fair, without public money, or Congressional approval.

There would be Fine Arts, a Midway, plus international, national, state, and county exhibits. The fair was well organized and took only seven months to build. In all, over one hundred structures were built. The main buildings were Manufactures & Liberal Arts, 462 x 225', costing $113,600, measuring 177,000 sq. ft., the Mechanical Arts Bldg., 330' x 160'. Horticultural & Agricultural Bldg., 400' x 200', plus the Arts Palace and the Administration Building. 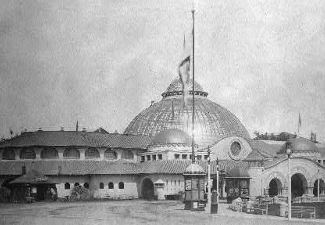 There were individual corporate buildings, including Baker's Chocolate Building, plus a Southern California Building, China Building (not official), and a scenic railway. The New York Times called the Midwinter Fair "marvelous." San Francisco, mired in a depression, was helped by the employement. Workers averaged $2.29 per day, with up to 586 employed. That figure is likely just by the exposition authority with more in the other pavilions and concessionaires. The entrances, nine of them, had automatic registering turnstyles. The day of highest attendance was Chronicle's Children's Day, March 31, with 90,097.

Although the California Midwinter was not considered the largest and most important of international expositions, it was a success. There was a profit of $66,851.49 without asking for or getting any funds from federal, state, or local government authorities.

Marvin Nathan - "This expo did not have congressional approval and gained little attention beyond California. Even the fair managers regarded the Columbian as "the world's fair" and their expo as a regional effort. Only a few Western states exhibited and the vast majority of foreign exhibits came straight from Chicago through the efforts of M .H. deYoung. The MF (Midwinter Fair) drew very few visitors from beyond the far West."

"There was a lot of word of mouth in San Francisco and in many California newspapers, but otherwise there's little evidence of public reaction east of Nevada or north of Oregon. Blissful ignorance beyond California and Nevada. However the tone is quite optimistic, except for acerbic editorials in labor union lit. DeYoung's San Francisco Chronicle was larded with stories and most of the other papers in town went along. Rural California papers and the LA Times were quite congratulatory and enthusiastic. For local coverage, expo floggers did quite well with many stories in newspapers and magazines. As above, little force beyond California. (Public after) Generally good - BUT there were complaints in public and private about the fair's incomplete condition on opening, theft of gate receipts, deYoung's singular importance, and the Chinese government refused to participate due to the Exclusionary acts. People liked the exhibits and loved the Midway Plaisance." 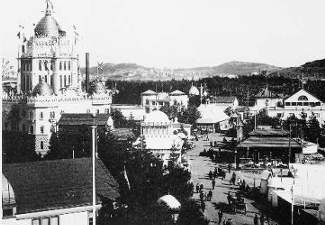 A variety of sources list different participants. The Official History said that there were over twenty-one nations represented with seventeen foreign commissioners. Whether that number includes the colonies of those nations is not known. Use the above as a guide, not gospel. There were also five states, the Arizona territory, and thirty-six California counties.

Expo Tidbits
Leonard Binet Tower, the Electric Tower, and many buildings were covered by thousands of lights at night.

The Midway was dubbed the Midway Plaisance and was a mixture of carnival and culture, including a 49ers Gold Rush Camp, Cairo street, Eskimo village, Hawaiian village, Dahomey village, and a Firth wheel.

John Phillip Sousa's concert band performed there for the first 6 weeks, with the 8th Regimental Band of the Mexican band also performing 6 weeks, including the closing ceremony on July 4. Exposition also had their own official band.

Legacies
Park was left with a Fine Art Building, assorted statuary, and one thousand, one hundred benches. Eventually, The Fine Arts Building was torn down and a new building became the M.H. De Young Museum. In 2006, a newer building was planned to house the De Young. Today, the Japanese Tea Garden in Golden Gate Park is the only remaining evidence of the fair.

Director-General of the fair was Michael H. de Young, publisher of the San Francisco Chronicle. 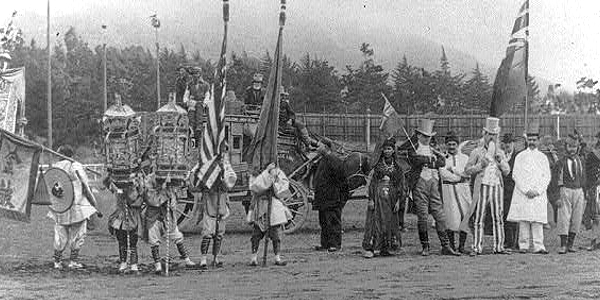