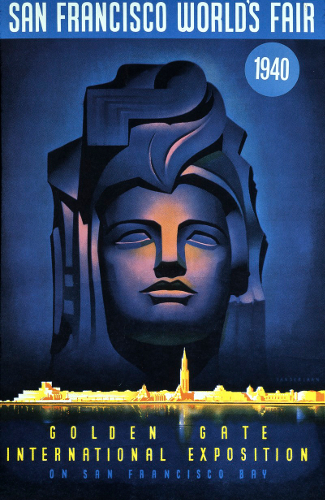 Site Acreage - 400 acres on Treasure Island in the center of San Francisco Bay.

Sanction and Type - Unsanctioned by the Bureau of International Exhibitions. Would be considered a Universal style Registered event today like those on the 0 years of the decade. Was federally recognized. Designated by President Roosevelt and Congress as America's official World's Fair of the West in 1939 with invitations to all nations sent by the President. 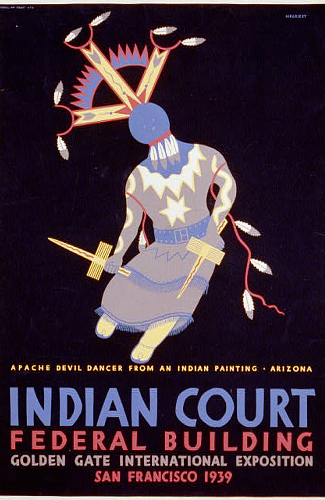 It was the unsanctioned cousin of the larger New York fair, but San Francisco's Golden Gate International Exposition of 1939-40 might have had one of the most spectacular settings in World's Fair history, the middle of San Francisco Bay. It celebrated the completion of the Golden Gate Bridge and the Oakland Bay Bridge, although the official theme was "Pacific Unity." Yes, when Japan attacked Pearl Harbor in 1941, that became an even more ironic theme than it ever intended to be. The site chosen, the Yerba Buena shoals, were initially rejected, but by 1936, the site had been chosen with the city/state leasing it to the Expo Authority, to turn it over to the city afterwards to be the municipal airport.

There were lots of public private initiatives going in in the 1930's as the Federal government tried to overcome the depression. The San Francisco Bay Exposition company got over four million dollars from the Works Progress Administration to reclaim and improve the shoals and nearly two million dollars from the W.P.A. to fund permanent and temporary improvement to the site. Sponsor's funds would cover the rest. Officially, the city and county became the sponsor of the exposition, but the Expo Authority underwrote the city responsibility.

Above photo. Poster for the Indian Court in the Federal Building, 1939, WPA, Louis B. Siegriest. Courtesy Library of Congress. Below: Map of the Golden Gate International Exposition, 1939. Photo courtesy Wikipedia Commons via U.C. Berkeley Bancroft Library. 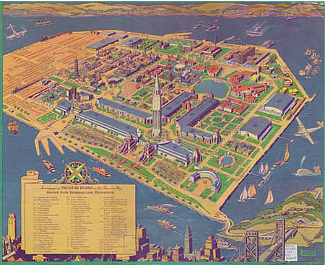 The United States appropriated $1.5 million for a Federal Buildling, barracks for troops, and a Coast Guard Station. There were 234 commercial exhibitors and 333 concessionaires. The commercial exhibits were housed in exhibit palaces: Aviation, Homes and Gardens, Mines, Mining and Machinery, Electricity, Communications, and Transportation, Hall of Science, and Foods and Beverages. Principal private exhibits buildings, financed by exhibitors were Bank of America, Ford Motor Company, National Cash Register Company, Temple of Religion, and Christian Science Activities, plus a cadre of others. The main exhibits were placed in six blocks of buildings spaced by broad courts such as the Court of Honor where the Tower of Sun was, the Court of Seven Seas, Court of the Moon, and the Enchanted Gardens.

By the end of the first year, World War was roaring in Europe, but the public favored a reopening. After the 1940 season, the Navy took over the site, postponing the idea of a municipal airport, using for World War II purposes, which continued after the war as well. The airport was eventually built south of the city.

The Golden Gate International Exposition was not as successful as they would have liked. It didn't turn a profit and had problems starting on opening day. Although the attendance on February 18, 1939 was high, 128,697, the authority had predicted 200,000. There had been bad publicity with congestion on the Bay Bridge predicted, telling guests to come by ferry and that the facilities would be inadequate. Visitors were told to bring their own lunch. Attendance was low into June until tourist travel picked up and the weather got better. There was a deficit of $9,106,489.10, although, to be fair, how accounting accounted for the remaining structures and improvements to Yerba Buena probably mitigates that story a bit.

Marvin Nathan - "National public reaction was limited, though Life Magazine did a couple of spreads. Word of mouth is hard to judge since the advertising campaign for this fair was very sophisticated, using demographics, Hollywood type hooplah and lots of celebration over the bridges. Local word of mouth seems pretty strong, however. There was a good deal of positive coverage in San Francisco and California papers, even some in national papers and magazines. On opening day major San Francisco papers ran large full page color illustrations and whole expo sections. I don't know of any concerted negativism, though by 1940 the papers talked a lot about the GGIE's financial problems. (Expo Authority) Very slick effort with exhibitors' brochures, chamber of commerce support, corporate participation, newspaper coverage. The big problems were the Depression and the New York fair. The consensus seems to be that people who attended the fair had a good time, despite the MGM lighting effects, cheap looking structural materials and honky-tonk tone of many of the Gayway amusements. The reaction of employment probably has a lot to do with the setting in the Bay, the release from both Depression and emerging war fears, and lots of freebies given out in the exhibition halls. Good publicity, though the papers began to bewail the financial losses and some complained about the Barbary Coast character of some of the amusements." 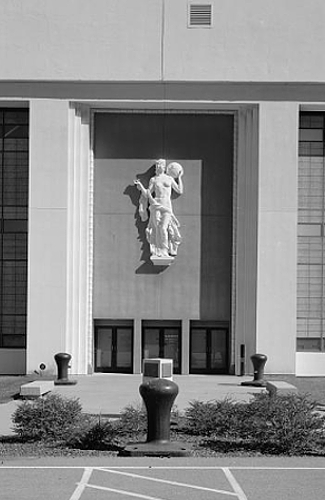 In 1940, there were only eleven official national pavilions.

Expo Tidbits
Entertainment shows included the Cavalcade with five hundred performers. It made $750,560.85 and a net profit of $55,101. Attendance 1,075,607. The Fine Arts Palace made 1939 revenue of $294,482.10. The Folies Bergere and the Ziegfields Follies attracted many visitors with the Follies Bergere the more successful.

Billy Rose was contracted for the 1940 season to operate the "Treasure Island Water Follies" or Aquacade. It played an imporatant role in contributing to the general attendance in 1940.

Expenditures of $65 million were spent by tourists in the city of San Francisco due to the Golden Gate International Exposition. California did $367 million more business in the first six months of 1939 than the year before. 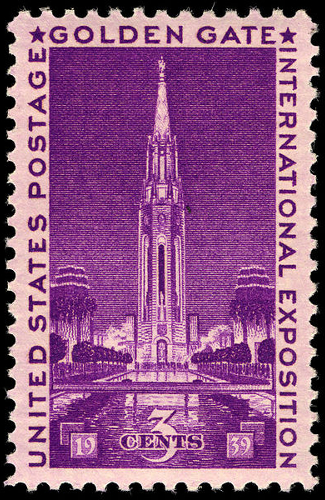