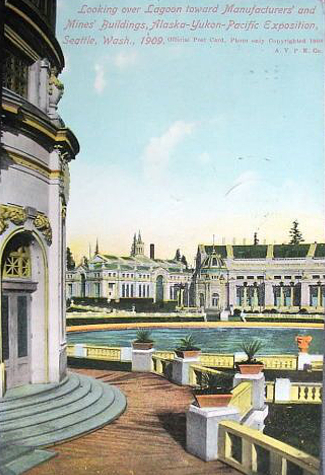 Site Acreage - 250 acres on what is today the University of Washington campus.

Sanction and Type - Prior to the Bureau of International Exhibitions. Would be considered a Special Category, Registered event today like those on the 5 years of the decade. There was a Federal appropriation of $600,000 for the fair. 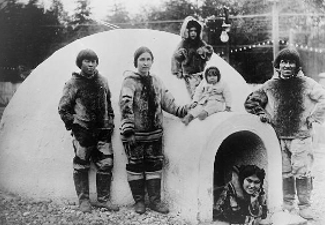 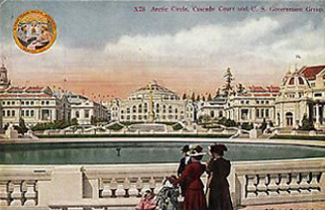 It was a fair that brought legacy in the form of the University of Washington campus, which prior to the fair had only three buildings and a rough wooded campus. It now would be augmented by the Olmstead's, John C. in particular, on two-thirds of its site. It was a fair that, along with its Portland counterpart in 1905, brought much needed recognition of the Pacific Northwest, still a far off backwater location to many East Coast residents. The official reason to host was the 10th anniversary of the Gold Rush, essentially in Canada, thus the Yukon portion to the name. Pacific was added to promote trade with the Orient. Yes, the Gold Rush anniversary should have been in 1907, but competition from the Jamestown Exposition that year caused the board to postpone the A.Y.P.E. to 1909. 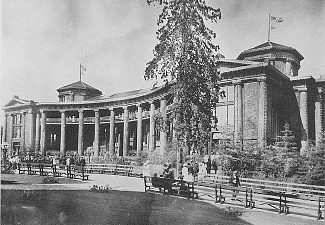 Well organized by the local community and fair authority, the Alaska Yukon Pacific Exposition was a success. It turned a profit, promoted the northwest, and left an expanded legacy to the University of Washington campus. Yes, the majority of the visitors to the fair were from the Northwest with few venturing west from the east, but that didn't stop the fair's success from promoting the region to the Pacific Rim for increased trade. Were there some complaints? Sure. It was not the largest international fair per participation. And the New York Times reported that other Washington cities were not very pleased as the fair drained Tacoma and Everett, therefore benefiting Seattle.

Matthew Klingle - "The turn-of-the-century was the era of world's fairs, and the Seattle exposition followed the popular St. Louis fair and the Lewis and Clark Exposition in Portland. As with other world's fairs, the federal government brought exhibits to the Alaska-Yukon-Pacific Exposition (AYPE) and helped with the funding. And promoters in Seattle touted Seattle's Progressive spirit and Americanism. But the fair, originally designed to celebrate the anniversary of the Klondike gold rush, was postponed because it conflicted with the Jamestown exposition of 1907. As a result, promoters in Seattle used the fair to tout the city's advantages for trade and natural resources. It played upon national pride, but it did not celebrate or commemorate any significant event."

Dan Kerlee - "The AYPE claimed that it was advancing new ideas about international trade and interdependency around the Pacific Rim. If this was true, then of course the fair was very forward looking. However, I believe that this was also pushed at the Lewis and Clark and many other fairs. The fair also had a certain emphasis on racial equality (blacks excepted). I can't say at this point whether any new ground was broken relative to society and other fairs; as was common at the time this may have been as much novelty as ethnology or sociology. The AYPE broke attendance projections, made money, and was closed with nostalgia, despite predictions that it would have trouble because of the prohibition against alcohol on the grounds. Alaskans and Seattleites alike are still very interested in this Fair, once they learn that it existed." Expo Tidbits
The amusement area of the A.Y.P.E. was known as the Pay Streak. Area included an Igorot and Eskimo village plus attractions on the Battle of Gettysburg and the Battle of the Monitor and Merrimac. The entire area was a big hit.

No liquor was for sale at the exhibition site due to a State Law forbidding sale on a University campus.

There were unique special days. One, known as Smith Day on September 2, 1909, invited those with the most common name in the United States to come. Over 5,000 people did.

89,286 people came to the Seattle fair on opening day.

Legacies
The University of Washington campus now occupies the A.Y.P.E. site with many structures and vistas still surviving from the master plan of the exposition. The Drumheller Fountain on the Science Quadrangle remains, pointing toward Mount Rainier. The Architecture Hall had been the Fine Arts Pavilion of the fair. The Women's Building remains as a Women's Studies hall. Other buildings survived the fair year, but were demolished in subsequent decades, including the Hoo Hoo House, Forestry Building, and Auditorium Hall. One lasting legacy was William Boeing's view of manned flying machines at the AYP. Yes, the founder of Boeing. 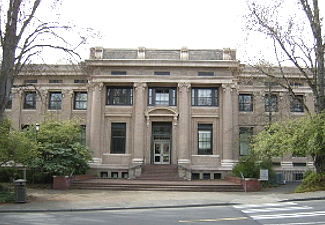 Sources: University of Washington Libraries, No Finer Site: The University of Washington's Early Years on Union Bay: VII. Campus Plans, 1891 - 1915; Report of the Alaska-Yukon-Pacific Exposition Commission of the State of Washington-Post Fair; Secretary's Report on the Alaska-Yukon-Pacific Exposition; "Open: A World of Wonders" by Sharon Boswell and Lorraine McConaghy; All the World's a Fair; Historical Dictionary of World's Fairs by Alfred Heller.