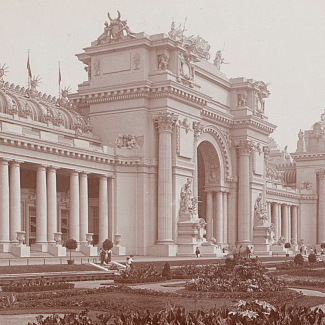 Site Acreage - 1272 acres on the grounds of Forest Park and today's Washington University.

Sanction and Type - Prior to the Bureau of International Exhibitions. St. Louis 1904 would be considered a large scale "Universal Exposition" today.

Recognized by both Federal and State governments, both of whom gave appropriations. President McKinley gave proclamation inviting nations of the earth to event commemorating the Purchase of the Louisiana Territory. 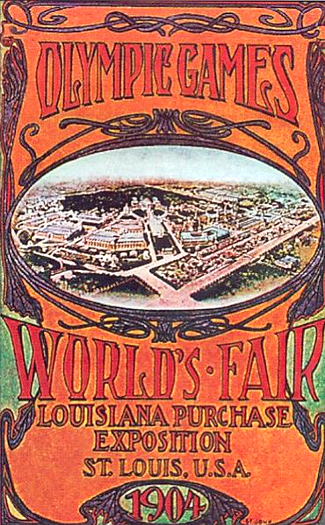 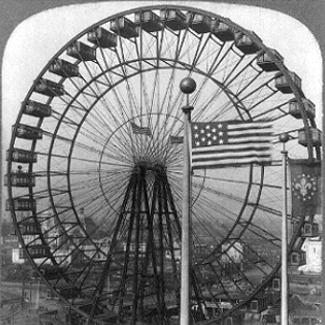 Meet Me in St. Louis, the song, promoted the fair, and later became a film hit forty years later, testament to its popularity. It was known for its grand palaces, most of the temporary kind, fountains, the $5 million Pike amusement area, which included what today would be seen as troublesome depictions of colonial life, and the invention of the ice cream cone. Some historians say that the Louisiana Purchase Exposition is one of those world's fairs that added less to history than others. Perhaps that's true from an exhibit standpoint, but it was hard to argue that the fair, which pulled tourists from a wider mileage than most and included a large international presence, was not impactful in its time and for the next fifty years.

When David R. Francis, former Mayor of St. Louis and Governor of Missouri, represented his state at the World's Columbian Exhibition in Chicago 1893, the idea had already been firmly planted. St. Louis had wanted the 1893 event, but once settled, began planning for another in St. Louis to celebrate the one hundredth anniversary of the Louisiana Purchase of 1803. Yes, there was a postponement.

This time, it would not only be a World's Fair, but also twin with the Summer Olympic Games, originally planned for Chicago. Turn around is fair play, it seems. It seems incongruous in these times, but at the turn of the century, it was a much bigger deal to host a World's Fair than an Olympics Games. The fair included huge ornate palaces, transportation around the grounds by railway or boat, and amusements on the Pike that included a Ferris Wheel (same as used in 1893 and moved to St. Louis, capacity 2,160 people), Cairo Street, Mysterious Asia, Empire of India, Fair Japan, the Chinese Village, the Tyrolean Alps, the Moorish Palace, the Irish Village, the Old Plantation, and the Boer War Exhibit, among hundreds more. How huge were those exhibit palaces? The Agriculture Pavilion would take a nine mile walk to see it all.

Above photo. St. Louis Ferris Wheel at expo, Underwood and Underwood, 1904. Below: Exhibit buildings and fountains around the Basin. Both photos courtesy Libary of Congress. 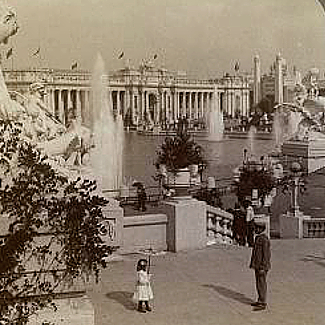 January 10, 1899 - Louisiana Purchase Convention convention of 90 delegates from states & territories of Louisiana Purchase met for purpose of considering commemoration of purchase. Delegates decided that nothing short of an international exposition would suit and decided that St. Louis, largest and most accessible city in area, would be the proper location. Missouri Historical Society also became involved in the effort.

June 4, 1900 - Both houses of Congress passed appropriation of $5 million, pending raising of $10 million by city and citizens.

January 12, 1901 - Popular subscription by citizens of St. Louis of $5 million was made, and on Jan. 30, 1901, ordinance was passed by St. Louis municipal assembly for the issuance of $5 million in city bonds to aid the Exposition.

August 20, 1901 - Proclamation made by President William McKinley inviting the nations of the earth to take part. Mexico would become the first to accept.

December 20, 1901 - Groundbreaking ceremony, tied to Louisiana Purchase Flag Day, which was celebrated on 98th anniversay of formal transfer of territory.

April 30, 1903 - The Dedication held to celebrate the actual anniversary of the centennial purchase of the Louisiana Territory. It was held in the Palace of Liberal Arts with an estimated attendance of 50,000, including President Theodore Roosevelt.

The Louisiana Purchase Exposition was considered a success, with education supplanting commerce in the exhibits, travel to St. Louis higher than expected, and a profit (some state a loss to subscriptions, but profits were used after the fair to construct memorials and the Jefferson Pavilion) made. So probably not a profit in the traditional sense, but it did better than previously thought. Although most of the spectacular buildings were temporary, the visage of the fair exceeded most attendee expectations. Some of that had to do with the concessions on the Pike, the amusement section, as much as it did the exhibits in the palaces and national buildings, although the exhibits did contain many unique new wares: The electric stove, dial telephone, and the wireless telegraph among them. 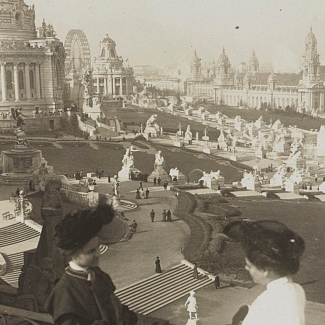 Various nations and their colonial or territorial possessions are listed in various buildings as participants. Some sources disagree on who was there and not there. Above list is from the Official Report by the President of the Exposition, David Francis. (B) represents that the nation/colony had their own pavilion. Some nations, such as Columbia, are listed as having Foreign Commission, but not listed as exhibitors.

Expo Tidbits
Democratic National Convention held in St. Louis as one of the conventions associated with the World's Fair.

The Pike or Midway was one mile long x six hundred feet wide. .

Fairgoers were the first to enjoy an ice-cream cone, iced tea, hamburgers, and roller-coaster rides.

St. Louis was the 4th largest city in the United States at the turn of the century.


Legacies
Jefferson Memorial was accepted by city on April 30, 1913, it was built with fair profits near location of the main entrance, but was not there during the fair. It is now home to the Missouri History Museum.

St. Louis Museum of Art, located on Art Hill, was the Palace of Fine Art at the exposition and still stands today .

World's Fair Pavilion is a structure built after the fair with its profits. It is located on the site of 1904 Missouri Building.

The administration building of the exposition is now Brookings Hall on the campus of Washington University.

Aviary at the St. Louis Zoo. 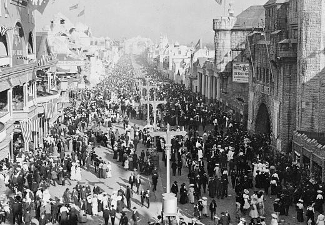 Historian Terry Laupp - "Most visitors had a positive reaction to the fair; however not all visitors entering the gates had the same feelings. Members of the black community had anticipated the fair as a hope for racial change in St. Louis, that did not occur. Despite the promise by the fair organizers, that members of all races were welcome to the fair, the black community was discriminated against. Members of the white middle class were very positive of the event and most remembered the Philippine exhibit (humans from that country on display in their "native" surroundings), which was more like a human zoo than an exhibit. Remember that this fair was held during the progressive era in american history and most americans felt the need to prove that the western civilization was superior."