November 7, 1811 - At the battle of Tippecanoe, Indian warriors under the command of Tecumseh and his brother Tenskwatawa, known as the Prophet, are defeated by William Henry Harrison, the governor of Indiana. 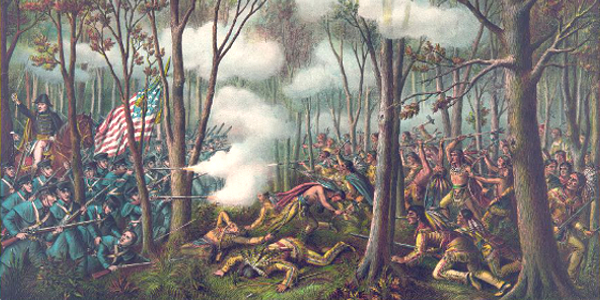 Today, there is a battlefield park in the small town of Battle Ground, Indiana. In 1811, the battlefield was but a frontier in the Territory of Indiana near the connection between the Wabash River and the Tippecanoe Creek. Tecumseh, his brother Tenskwatawa, also known as the prophet, held a Confederacy of Tribes, including their own Shawnee, in a camp nearby. Future President and current Governor William Henry Harrison of the territory was sent to their location with one thousand men, including two hundred and fifty Army regulars, to disperse them. Harrison had been on a mission since his elevation to Governor eleven years earlier; he wanted to make Indiana attractive enough to bring in settlers, sixty thousand of them, so the Territory could qualify for statehood. The current population of the territory was about twenty-five thousand by 1810.

By 1811, he had negotiated many Indian treaties to make the territory safe, including the Treaty of Fort Wayne with the leaders of the Miami, Pottawatomie, Lenape, and other tribes in 1809. That treaty had given three million acres to the Territorial Government for settlement. Tecumseh, leading the Shawnee, and Joseph Brant, the leader of the Mohawks, did not agree with the Treaty of Fort Wayne. They considered all Indian lands in common with all tribes, and therefore effectively void without agreement from everyone. Tecumseh met with Harrison in 1810, insisting that the treaty be voided and warning that settlement on any of those lands could bring trouble. He also stated that the tribes could seek alliance with the British if his demands were not met and violence took hold. They met again in August 1811; this time Tecumseh stated that he sought peace, although he went on recruiting missions to southern tribes seeking allies for the opposite. British guns found in Prophetstown after the battle also showed that Tecumseh had already become their ally.

Harrison had noted the differing opinions between the words of peace and the possiblity of war in a report to the War Department on September 17, 1811. "... reports that all the Indians of the Wabash have been, or now are, on a visit to the British Agent at Maiden ; he has never known more than a fourth as many goods given to the Indians as they are now distributing. He examined the share of one man (not a chief), and found he had received an elegant rifle, twenty-five pounds of powder, fifty pounds of lead, three blankets, three strouds of cloth, ten shirts, and several other articles. He says every Indian is furnished with a gun (either rifle or fusil) and abundance of ammunition." This same person says further: "Although I am decidedly of the opinion that the tendency of the British measures is hostility to us, candor obliges me to inform you that, from two Indians of different tribes, I have received information that the British Agent absolutely dissuaded them from going to war against the United States."

The Battle of Tippecanoe

While Tecumseh was away on that recruiting mission to augment his Confederacy of Tribes army, Harrison arrived near Prophetstown on November 6 with the authority from Washington superiors to disperse the growing Confederacy and force them to accept peace. Only brother, Tenskwatawa, the spiritual man, was there. Without Tecumseh in camp, the advantage in a military confrontation would definitely side with Harrison and the Territory troops. Tenskwatawa sent an emmisary under a white flag to arrange a meeting with Harrison (some contend the meeting would be with Tecumseh upon his return) on November 7 or thereafter. General Harrison was wary of the overture, but accepted. However, before that meeting could take place, the warriors of the Shawnee and allies, led by Ho-Chunk warriors (Winnebago) in the Prophetstown camp, attacked Harrison's camp. It was a foolish decision that in later years was debunked as his own in 1816. Tenskwatawa said he did not order the attack. although rumors and other accounts contend that the Prophet was okay with a plan to murder Harrison in his tent prior to the meeting anyway.

The battle began at 4:30 a.m. as warriors encircled the camp. Harrison's troops, however, had been ordered to sleep with their guns loaded, as Harrison and subordinates never trusted the authenticity of any future meeting or negotiation. The cover of darkness led to an initial surge by the Shawnee and Winnebago warriors that eventually was met by a countercharge with bayonet from government troops.

A second charge by the warriors on the north and south ends of camp, with more success on the southern end. However, the lines of Harrison's troops held, and with daylight approaching after two hours of fighting, showing the paucity of Indian warriors low on ammunition, a second charge caused the Confederacy of Tribes troops to withdraw.

When the warriors reached Prophetstown after their retreat, Tenskwatawa insisted they attack again, but was refused. The Confederacy, with five to seven hundred warriors engaged in the first attack, had lost one hundred twenty to one hundred and forty-five men killed and wounded already. Harrison's troops saw sixty-three killed and one hundred and twenty-six wounded, and ordered his camp fortified in case Tecumseh returned from his recruitment mission with additional troops. General Harrison had been in jeopardy throughout the battle, with a grazed injury to his head when a bullet passed through his hat. When he sent a detachment to survey Prophetstown on November 8, it had been deserted. Harrison destroyed the town; when Tecumseh returned to Prophetstown three month later, it was in ruins, and he, like his brother, would contend that the older chiefs had not authorized the battle, but that it was undertaken by young warriors against their wishes.

The destruction of Prophetstown and inability to marshal the remaining Indian forces into a larger Indian Confederacy would prompt Tecumseh to side with the British in the War of 1812. For Harrison, he would use the site, and slogan "Tippecanoe and Tyler, too," in his run for the Presidency of the United States, reminding voters of his bravery and success in the battle.

A one hundred and four acre Tippecanoe Battlefield Park now commemorates the Battle of Tippecanoe with an obelisk, eight-five feet tall, built in 1908, as tribute. There is a museum, gift shop, a Wah-ba-shik-a Nature Center, Historic Chapel, the Wabash Heritage Trail, and picnic facilities to visit, enjoy, and learn more about the history of the battle. The park is located at 200 Battle Ground Avenue, Battle Ground, IN 47906.

The history of the park also includes events related to the presidency of William Henry Harrison. His political rally for the 1840 campaign was witnessed by thirty thousand people on May 29. The park was designated a National Historic Landmark in 1960. 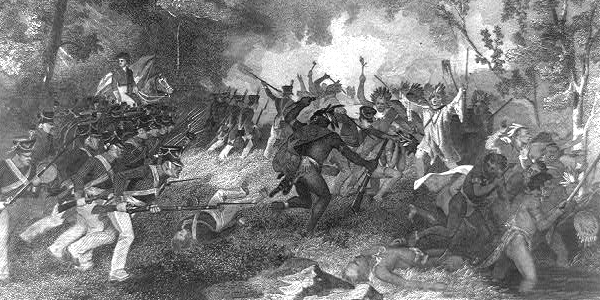