September 3, 1838 - Frederick Douglass, future abolitionist, boards a train in Maryland to freedom from slavery, with borrowed identification and a sailor's uniform from a free Black seaman. It would take twenty-five years for the former slave to rise to the level of a presidential visit the like depicted in the image above, but that day would come. Frederick Douglass, born Frederick Augustus Washington Bailey on the Eastern Shore of Maryland, would have a seminal effect and impact on the history of the United States in some ways, actually many ways, parallel to President Lincoln. But first, Frederick Douglass would have to gain his freedom.

When September of 1838 arrived, Frederick Douglass was twenty years old and still a slave. He had worked, since the age of eight, as a body servant in Baltimore and taught himself to read. Sent back to the eastern shore of Maryland where he had been born in 1833, Douglass became more determined to end his life in servitude. He taught others to read, rebelled, and attempted to escape. The first attempt was unsuccessful. A second attempt in 1836 was unsuccessful as well.

After that attempt, he was sent back to Baltimore to work, meeting a freed black woman named Anna Murray. Anna Murray had never been a slave; her parents had been freed one month before her birth. By the time Douglass came back to Baltimore, Anna had already established herself as a successful laundress and housekeeper. She met Frederick Douglass on the docks. Encouraged by her story, Douglass planned a third escape. Anna Murray give him a sailor's uniform she was laundering, part of her life savings after selling a feather bed, and Douglass bought a ticket north. In that sailor's uniform, Frederick Douglass boarded a train of the Philadelphia, Wilmington, and Baltimore Railroad to the north on September 3, 1838.

Traveling under documents provided by a free black seamen, Douglass first entered Philadelphia by steamboat (the train line was only completed to Wilmington), then traveled on to New York City and the safe house of abolitionist David Ruggles at the corner of Church and Lespenard Streets. The journey had taken him only twenty-four hours. Douglass sent for Anna Murray once he arrived, then waited for her to follow him north. Twelve days after leaving Baltimore for freedom, Douglass married Anna Murray. They moved to New Bedford, Massachusetts in an better attempt to stay free, and he began his career as a preacher and abolitionist. Anna and Frederick had five children.

"I would unite with anybody to do right and with nobody to do wrong." In those words lay the fortitude for his cause; the abolition of slavery. "Right is of no Sex - Truth is of no Color - God is the Father of us all, and we are all Brethren," was the motto of his North Star newspaper.

1845 - Published his first autobiography, "Narrative of the Life of Frederick Douglass." By 1860, it had sold more than thirty thousand copies.

August 16, 1845 - Traveled and lectured overseas for two years to avoid being recaptured. Freedom was bought be abolitionists in the United States with Douglass returning home in spring 1847 to his wife and family. They settled in New Rochester, New York.

December 3, 1847 - Founded the newspaper named The North Star, and fought for women's rights, assisted with the underground railroad, and supported anti-slavery parties.

1855 - Published his second autobiography, "My Bondage and My Freedom."

March 12, 1859 - Met with abolitionist John Brown and other abolitionists in Detroit. He disagreed with John Brown on fostering an armed insurrection of slaves and the attack on Harpers Ferry. Douglass fled to Canada after the raid, fearing guilt by association.

1861 - With outbreak of the Civil War, Frederick Douglass fought for abolition of slavery as an outcome, recruited African American soldiers into the effort (two of his sons fought for the 54th Massachusetts Infantry.), and urged passage of the 13th, 14th and 15th amendments to the Constitution. He did not support President Lincoln in the 1864 election, disappointed that black men did not gain the right to vote upon emancipation. He supported John C. Fremont, candidate for the abolition party, the Radical Democracy Party.

1871 - Frederick Douglass became the assistant secretary of the Santo Domingo Commission; in April 1871, he became the legislative council member for the District of Columbia Territorial Government.

1874 - Appointed President of the Freedman's Savings and Trust Company, established in 1865 to assist freed black men establish savings and credit.

1877-1881 - Appointed United States Marshall for the District of Columbia by President Rutherford B. Hayes. This was the first appointment for a black man that required and got passage by the United States Senate. During his first year in that position, Frederick Douglass moved into Cedar Hill, now a National Park Service Historic Site.

Frederick Douglass moved into Cedar Hill in 1877, now an eight acre National Historic Site in the Anacostia region of Washington, D.C. It can be visited daily by guided tour. Reservations are not required, but suggested. There is a visitor center with exhibits and a nineteen minute film, "Fighter for Freedom; the Frederick Douglass Story." The National Historic Site was established in 1988. 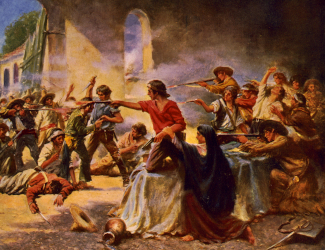 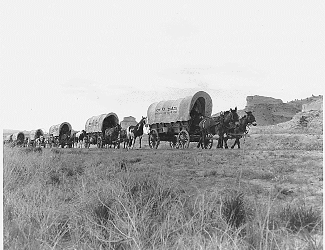 A reenactment of a wagon train on the Oregon Trail brings back the time of the great migration west at national historic sites such as Scotts Bluff National Historic Site. Photo courtesy National Archives.