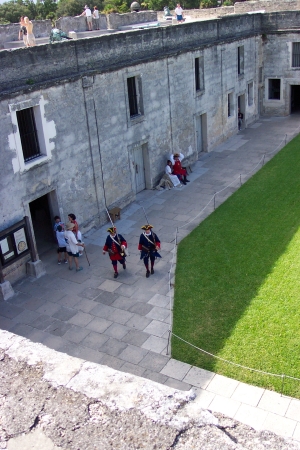 If you told most visitors to Florida that the oldest town in the United States did not reside in New England or Virginia, they wouldn't have a clue to what city your were talking about. And if you mentioned to your kids that only a generation ago, a visit to this town just had to be included on their visit to Florida, right up there with the Everglades, Miami, Cape Canaveral, and Cypress Gardens, they'd think you were nuts. What no mouse! Well, it's all true, and a visit to Florida still should include St. Augustine, the oldest city in the nation since its founding by the Spanish in 1565. This was forty-two years before Jamestown and fifty-five years prior to Plymouth Rock, so we're talking old for the states, here. And the town, only forty miles south of Jacksonville down I-95, before Daytona Beach and the Rt. 4 race to Disney, is a quaint, jaunt back in Spanish flavored time that visitors to Florida should not miss. The mouse will wait, although if you have kids, probably best to go to the mouse first and hit St. Augustine on the ride home.

The City Through the Ages - The many eras of St. Augustine began with its founding in 1565, through the Spanish Colonial period, the Civil War, the golden age of tourism, as well as today. Through the Spanish Quarter, the Colonial Historic District, and more, you can still see the vestiges of just how this town began, grew, and is today.

Castillo de San Marcos National Monument- A fixture in St. Augustine since 1672. It held back two British invasions, kept the Confederates at bay during the four years of Civil War and has seen the history of north Florida from its casements.

1513 - Ponce de Leon discovers Florida.
1565 - On September 8, St. Augustine is founded by Don Pedro de Men&eacutendez de Avil&eacutes, the Spanish admiral, as the first permanent settlement in the United States. The settlement was to serve as a military outpost and base for Catholic missionary settlements.
1586 - The city of St. Augustine, Florida, is destroyed by Sir Francis Drake in the Anglo-Spanish War.
1672 - Spanish forces begin construction of a stone fortress, completing Castillo de San Marcos in 1695.
1702 - British forces invade St. Augustine, destroying most of St. Augustine outside the Castillo de San Marcos, but do not take the castillo.
1740 - A second attack from British forces from Georgia fail to take the fort.
1763 - The Treaty of Paris, settling the French and Indian Wars, places Florida under British auspices.
1783 - The 2nd Treaty of Paris, settling the American Revolution, gives Florida back to Spain as an award for its assistance to the newly formed United States of America.
1821 - After three years of negotiations, the Adams-Onis treaty gives the territory of Florida and St. Augustine to the United States.
1845 - Florida was accepted into the Union as a state.
1861 - St. Augustine is occupied by Federal forces despite Florida's part in the Confederacy and St. Augustine remains in Union control throughout the Civil War.
1867 - St. Augustine is recreated as a winter resort town by Rockefeller associate Henry Flagler. Three large hotels are built. The Ponce de Leon is now part of Flagler College. The Alcazar is now the Lightner Museum and city offices. The Casa Monica has been restored to its original purpose as a hotel.
1935 - Concerted effort by public officials to preseve the remaining 36 colonial structure and reconstruct other buildings in the Colonial Quarter. The twelve thousand people who call St. Augustine home, as well as those two million visitors from the sunshine state and elsewhere, know about the charm, the beauty, the history, and the beaches here. It's just that it has become a bit overshadowed by the fun down the coast, by the central part of the state that has become, to some, a place to fly into, either literally or by car, while missing the charms around them. While many of the original buildings from the 16th century were destroyed when the British invaded in 1702, the Historic Colonial Spanish Quarter District is laid out on the original town plan and contains thirty-six original colonial buildings, plus forty more reconstructed. The Castillo de San Marcos, now a national park, is still there, and both south and north of the city stand forts that guarded northern Florida from the invading forces of British, or Yankee origen. And for those with a more modern history flair, the World Golf Hall of Fame also calls St. Augustine home.

Castillo de San Marcos - Still there witnessing the history of St. Augustine, but now from the tourist's point of view. You can explore the fortress, take part in ranger programs, view living history at the fort, or just view teh city from the parapet.

Colonial Historic District - Thirty-six original buildings, plus forty reconstructed, tell the story of the period with a ton of ambience and charm. 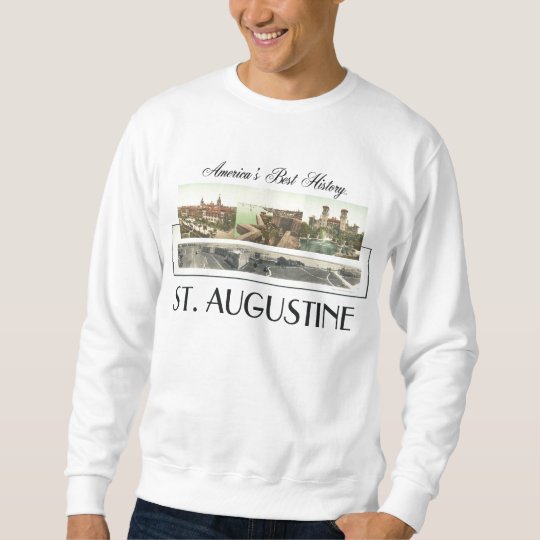 St. Augustine T-Shirts and Souvenirs from the official merchandise of America's Best History. Great for your next Florida adventure or to remember one you've already had.

1. The film, "Struggle to Survive" in the Visitor Information Center Theatre. It is a good introduction to the town, the settlers, and is shown hourly.

2. The Castillo de San Marcos. This fort is the oldest surviving structure in the town, a 17th century icon that withheld the advance of the British during two invasions, plus kept the town in Union hands during the Civil War.

3. Walk the Colonal Spanish Quarter. The charm of this area will take you back in time, whether you've already seen the mouse or not.

4. Wander over to Flagler College and look for the period Ponce de Leon Hotel that now serves the college in a different capacity than turn of the century guests. Be mindful of the students. It's a college now after all.

St. Augustine Visitor Information Center - A great place to start your visit with parking, lots of info, and the introductory film, "Struggle to Survive." St. Augustine and its sites are predominantly pedestrain friendly, about one mile long and one-half mile wide. There is parking available near the center. Tour trains, trolleys, horse carriages, and other modes of transport are provided by private companies.

Colonial Spanish Quarter Museum - This living history museum has constumed interpreters and illustrates the life of Spanish soldiers and citizens during the period.

Castillo de San Marcos National Monument - The fort is located in the center of St. Augustine and integral in its history and defense since 1672. It was built to protect Spain's claim in the New World. Open 8:15 a.m. to 5:15 daily.

Fort Matanzas National Monument - South of the town proper, this fort, along with San Marcos and Fort Mose (north of town and now a State Park) formed the troica of defenses of the city and region for over three hundred years. Mose was built in 1738 and was the first free black settlement in North America. 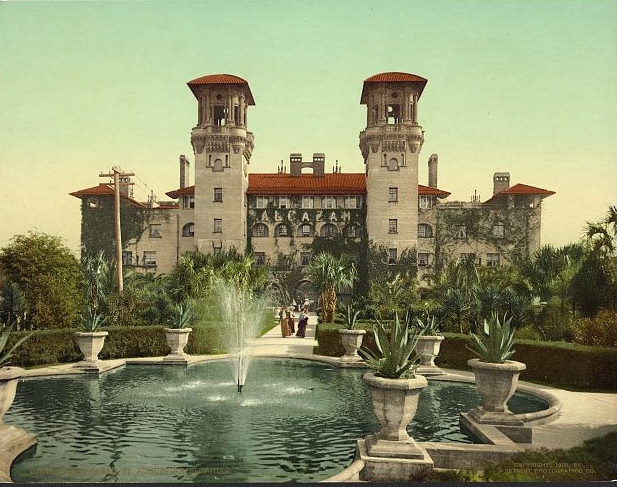 St. Augustine has a variety of lodging choices, including one of the three 1867 hotels built by Flagler, the Casa Monica (drawing below). Although it was likely the least ornate of the spectacular three, a stay there is part of the history of the town. You can visit the other two as well, as the Lightner Museum and part of Flagler College. For other choices, check out your favorite online lodging site.

Photo above: The Alcazar Hotel in 1902. It is now the Lightner Museum. 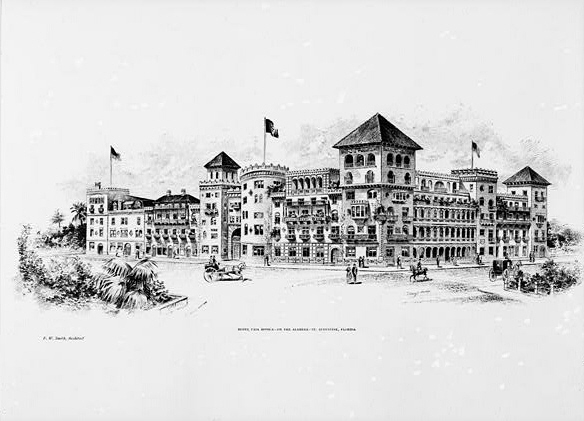 Image above: Drawing of the Casa Monica Hotel in St. Augustine, which opened in 1888. The hotel, now a four star property, has been restored and is open for guests.