Including the official souvenirs from Americasbesthistory.com.

March 19, 1831 - The first bank robbery in United States history occurs at the City Bank of New York. Edward Smith robbed the Wall Street bank of $245,000. He would be caught and convicted of the crime with sentencing of five years in Sing Sing prison. 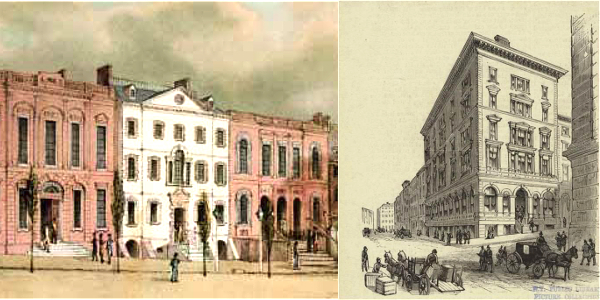 The City Bank of New York had been founded on June 16, 1812 with its first branch located near the intersection of William and Wall Street, 38 Wall Street, the third house from the corner. Retired Colonel Samuel Osgood was its first president. During its first three decades, the bank financed war bonds for the War of 1812 and grew into an established finance institution, known for housing city and other bank notes, plus Spanish gold doubloons, a gold coin of 6.8 grams, predominantly of real gold.

Two men, James Honeyman (aka Edward Smith; Honeyman used a variety of Smith and Jones as aliases sometimes referred to in this case) and William J. Murray, with keys made from a wax impression of the door locks, entered the bank late on the night of March 20, 1831. Working for several hours, the two men secured $245,000 ($52 million today) worth of notes, doubloons, and more. They divided the loot at Murray's house, with Honeyman taking his share to a rented room at a boarding house. The boarding house manager, however, became suspicious at seeing the trunks and reading the reports widely circulated in the New York Post. He summoned the New York constable, Jacob Hays, appointed in 1802 as Chief of the Day Police Force by Mayor Edward Livingston. Hays had arrested Honeyman on a store robbery in Brooklyn, but did not have the evidence to convict in that case.

Hays would get a conviction, this time, for Honeyman and Murray, who he trailed to Philadelphia to apprehend. They were convicted and sentenced to five years in jail at Sing Sing Prison. Sing Sing Prison had been open since 1826 on a one hundred and thirty acre site on Mount Pleasant, New York.

Over twenty years earlier, in 1775, Carpenters' Hall had been built in Philadelphia by the craft guild called the Carpenters' Company of the City and County of Philadelphia. They still own the building, located in Independence National Historical Park, today. The history of the building had already been storied through its first decades; holding meetings of the Continental Congress and the Pennsylvania Provincial Congress and the building was occupied by the British Army during 1777 after their seizure of the city during the Philadelphia Campaign of the American Revolution.

In 1798, the city of Philadelphia had been embroiled in yellow fever, with over one thousand of its citizens falling and many evacuating the city. The Bank of Pennsylvania had vaults in Carpenters' Hall due to a failed attempt at its headquarters in the Masonic Lodge, and with the city occupied by the epidemic, the robbery occurred during the night of August 31 and September 1 with no signs of forced entry. Sum stolen $162,821. It was quickly assumed that a carpenter, Samuel Robinson, who had been engaging in work to refit the building for the move of the bank into the hall, was suspect, as well as Pat Lyon, a blacksmith who had worked on its doors and locks.

Lyon was convicted in error, spending three months in prison, until the full plot was discovered. A visitor to Lyon's shop and member of the Carpenters' Guild, Isaac Davis, had perpetrated the crime with a partner who had died days after from the fever, as well as help from the bank porter. And how was Davis found out? He began depositing some of the money stolen in the very bank he had robbed. The suspiciously large sum alerted bank authorities. When confronted, Davis confessed, then was pardoned by the governor without serving one day in jail. Lyon was eventually released from jail, wrote a book, and sued for damages. He was awarded $12,000 in 1805 for false imprisonment, eventually lowered when appealed to $9,000. 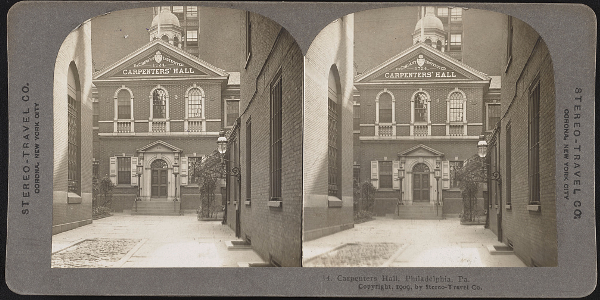