February 8, 1697 - William Penn, leader of the Pennsylvania colony, creates a plan for intercolonial cooperation, first colonial idea for combining colonies into one nation, that would influence the drafting of the Constitution. 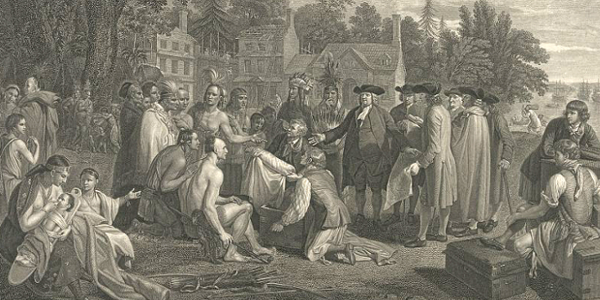 For most, the general impression of William Penn is two fold. He would establish the colony, province of Pennsylvania, under royal charter in 1681, as a Quaker state, also purchasing land rights from the Indian nations of the region, which would lead into number two. Second, Penn would make treaties with the local native population (Lenni Lenape, Delaware), and have, for a good stretch of time, better relations with the Indians than many of the other colonies.

But William Penn was more than that. He had been persecuted for his Quaker beliefs in London throughout the late 1670's, jailed four times for having dissenting views from the common orthodoxy of England. In 1670, he started to attend the English court, becoming friends with King Charles II and later King James II. He spoke of religious toleration. When King Charles II needed to repay a debt to William Penn in 1681 for monies owed his father, the King gave him a land grant for the province of Pennsylvania.

It would be a state of religious tolerance, with land sold at resaonable rates, which Penn promoted well. The first five hundred thousand acres got bonus lots in a planned city, Philadelphia. Penn arrived for the first time in October 1682, remaining there for only two years before his travel back to England in defense of the terms of his Pennsylvania charter.

While his absence from the colonies caused Penn consernation to his business interests, he remained engaged with the colonies through actions at the Board of Trade. With the strife caused by King William's War, Penn sought a way to ensure that the English possessions were safe in the uneasy years after the Treaty ending that conflict.

On May 17, 1696, the Board of Commissioners for Promoting the Trade of the Kingdom, had been created by King William III. It was given the task of inspecting and improving the plantations, colonies, in America, and other British possessions. Three months later, August 20, 1696, it created a report for the Privy Council, that gave the King recommendations. There should be a captain general appointed with command of the crown's forces and an entire colonial militia. That general would commission officers and employ their services upon instructions from England. When this captain general were in the colonies, he would have the power of a governor.

This got William Penn to consider a better plan. On February 8, 1696-7, what would be 1697 to us today (the first day of the year had not yet been changed to January 1), Penn made a proposal to the Board of Trade for a legislative and executive colonial union that could benefit the crown and the colonies. It was short, with seven points, and is one of the first, if not the first, general plan for a united colonies, stretching from Boston to the Carolinas, in some measure predicting the establishment of the United States to come.

His plan would become part of the basis for later plans for union, i.e. Benjamin Franklin and his Albany Plan for Union in 1754, and later, the Constitution.

A Briefe and Plaine Scheam how the English Colonies in the North parts of America Viz: Boston Connecticut Road Island New York New Jersey, Pensilvania, Mary land, Virginia and Carolina may be made more usefull to the Crowne, and one anothers peace and safty with an uni versall concurrance.

"1st. That the severall Colonies before mentioned do meet once a year, and oftener if need be, during the war, and at least once in two years in times of peace, by their Stated and appointed Deputies, to debate and resolve of such measures as are most adviseable for their better under standing, and the publick tranquility and safety.

"2. That in order to it two persons well qualified for sence sobriety and substance be appointed by each Province as their Representatives or Deputies, which in the whole make the Congress to consist of twenty persons."

3. That the King's Commissioners for that purpose specially appointed shall have the Chaire and preside in the said Congresse.

"4. That they shall meet as near as conveniently may be to the most centrall Colony for ease of the Deputies.

"5. Since that may in all probability, be New York both because it is near the Center of the Colonies and for that it is a Frontier and in the Kings nomination, the Govr of that Colony may therefore also be the Kings High Commissioner during the Session after the manner of Scotland."

6. That their business shall be to hear and adjust all matters of Complaint or differences between Province and Province, As 1st where persons quit their own Province and goe to another, that they may avoid their just debts tho they be able to pay them, 2d where offenders fly Justice, or Justice cannot well be had upon such offenders in the Prov inces that entertaine them, 3dly to prevent or cure injuries in point of commerce, 4th, to consider of ways and means to support the union and safety of these Provinces against the publick enemies. In which Congresse the Quotas of men and charges will be much Easier, and more equally sett, then it is possible for any establishment made here to do ; for the Provinces, knowing their own condition and one anothers, can debate that matter with more freedome and satisfaction and better adjust and ballance their affairs in all respects for their common safty.

"7ly That in times of war the Kings High Commissioner shall be generall or Chief Commander of the severall Quotas upon service against the Common Enemy as he shall be advised, for the good and benefit of the whole.

Image Above: William Penn's treaty with the Indians, 1775, John Hall. Courtesy Library of Congress. Below: The Treaty of Penn with the Indians, 1771-2, Benjamin West. Courtesy Pennsylvania Academy of Fine Arts via Wikipedia Commons. Info source: Archive.org; "William Penn's Plan for the Future of the Colonies", Contributions to American History" (Memoirs of the Historical Society of Pennsylvania, Vol. VL, pp. 264-65; Library of Congress; history.state.gov; Wikipedia.