April 1688 - King William's War, also known as the Second Indian War, begins, the first in a series of colonial wars between New France and the British colonies. It would last for nine years.

Okay, so there's a first here of substantial proportion, and one second, slightly below that level. It is considered the first of the colonial wars between New France, with their Indian allies (Wabanaki Confederacy), and New England, with their native allies (Iroquois). That's a substantial first. It is considered the Second Indian War after it's predecessor, the King Philip's War. What you get when reading history of the time period prior to the American Revolution, is that the colonial powers, or the colonists themselves versus the tribes, were in constant battle for control of land. Not surprising. In King William's War, there was even a broader context, as it was only the American part of the Nine Years' War in Europe between France and a group of allies, including England, the Dutch Republic, Spain, Portugal, the Holy Roman Empire, and the Savoy.

They should have seen it coming. Yes, this was a rather predictable outcome as the treaties of King Philip's war were broached. In essence, the French thought the natives were with them; at times, the English thought the opposite. Why the English thought they had more friends than they did is confusing, as they often treated the native populations as subjects of their king. Part of the reason why the English thought that, and were dismissive of New France claims, was the arrogance of size. One hundred and fifty-four thousand English had settled the coasts from Maine to the Carolinas by the time King William's War began. The French had less than fifteen thousand.

But there was a problem with the largess. English colonies were spread thin and had little cooperation among them. They misunderstood their Iroquois allies. The French were prodominantly located in Acadia and along the St. Lawrence to the Great Lakes, with a small colonial presence along the Gulf Coast.

While the Glorious Revolution waged in England between William III, William of Orange, and Mary II, against King James II in 1688, tensions mounted in the colonies between New France and New England. Jean-Vincent d'Abbadie de Saint-Castin was a French military officer and Abenaki chief who ran a trading post in Acadia. In April 1888, newly appointed Governor, Sir Edmund Andros, of the Dominion of New England, raided Castin's home on Penobscot Bay, stating the pretext that it was in English territory. The English followed that up with a raid of Chedabouctou, a New France Nova Scotia village, in August. Castin and his allies in the Wabanaki Confederacy responded along the border, starting with a raid at New Dartmouth where several settlers were killed, then moving on to Yarmouth, and Kennebunk. The first war between New France and New England had begun.

The war would continue for nine years with countless battles and raids across New France and New England (estimated sixty attacks in New England alone) in the territories of the Colony of New France, the Colony of Connecticut, the Massachusetts Bay Colony, Province of New Hampshire, and the Province of New York. The financial cost of the war in terms of money, lives (five hundred to six hundred English colonists alone killed with many more captured), and famine caused both sides to realize that they needed peace.

By the end of 1697, the Peace Treaties of Ryswick (Rijswijk) were signed. They stated that the borders of New France, New England, and New York would remain as prior to war, but left open the issues of other unresolved territorial claims. Once again, the terms and peace would not last; those unresolved issues would come back in 1702 with the second of the New France, New England wars, the Queen Anne's War. Four more New France versus New England (English colonies) conflicts would be fought after that one, too, until the end of the French and Indian War, which finally brought an end to New France and victory for the British.

May 16-20, 1690 - Four to five hundred New France allies lay siege to Fort Loyal over four days after troops of Benjamin Church leave for Boston. Settlers surrender fort at Falmouth in the Battle of Fort Loyal; all settlers killed, an estimated two hundred, or taken prisoner.

May 19, 1690 - Battle of Port Royal begins when New England commander Sir William Phips, with seven hundred and thirty-six men and seven ships, attack new fort at Port Royal. New France, with only seventy soldiers at the unfinished garrison, surrenders. Some sources list this as occuring on May 9.

September 11-26, 1690 - Benjamin Church arrives at Casco Bay with three hundred soldiers, and attacks native villages in his second expedition to Acadia, then returns to New Hampshire.

September 20, 1697 to October 30, 1697 - Negotiations begin for the Peace Treaty of Ryswick (Rijswijk), a series of treaties to end King William's War, at Dutch city.

Image above: Painting of Frontenac and Sir William Phips at surrender of Quebec in 1690 during King William's War, circa 1915, Charles William Jefferys. Courtesy Library and Archives Canada via Wikipedica Commons. Image below: Map of King William's War, 2011, Se'mhur, Hoodinski, Creative Commons Share-Alike 3.0 License. Courtesy Wikipedica Commons. Info source: warpaths2peacepipes.com; "The Acts and Negotiations Together with the particular Articles at large, of the General Peace, Concluded at Rtswick, To which is premised The Negotiations and Articles of the Peace, concluded at Turin between the fame Prince and the Duke of Savoy." 1698; historyofmassachusetts.org; Wikipedia. 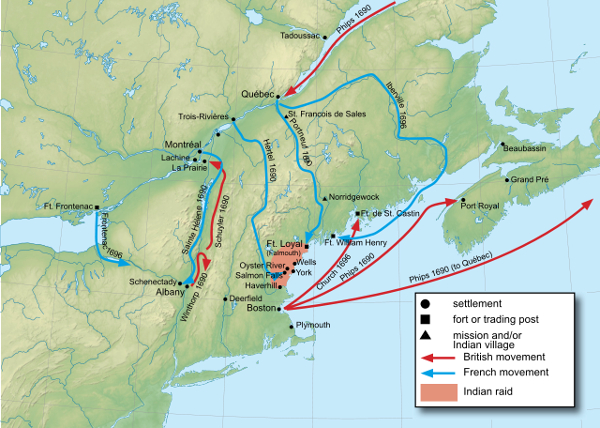