May 14, 1686 - New charter for Dominion of New England arrives, granting Joseph Dudley control of English colonial territory from Maine to New Jersey after some of the original colonial charters were, or would be, revoked.

It would be big. Too big. However, the idea of combining the colonies of New England into a new administrative unit, stretching from Maine to New Hampshire to the Massachusetts Bay Colony and Plymouth to Connecticut, New York, and New Jersey, seemed like a good idea to some. One was King James II. The original colonial charter for the Massachusetts Bay Colony had been revoked on October 3, 1684 by his brother King Charles II (they kept refusing to adhere to his demands when it conflicted with their Puritan biblical beliefs), and the idea of larger entities, eventually one large entity, had been in the offing in previous consolidations. King James II chose Joseph Dudley. Who you ask? That's not a name we know much of. Partly because they really wanted Sir William Andros, former colonial governor of New York, for the job, but there was some bureaucratic snafu with him for a bit. In either case, there's good reason not much is known of the Dominion. The experiment would not work. It would only last three years.

King James II was new to the throne, one year into his reign passed down from brother King Charles II, and held early support from England, Scotland, and Ireland upon his elevation to King. He was Catholic; the last Catholic to be King. That tells part of the story, particularly in the end, as in December of 1688, he would be deposed due to questions of religious tolerance, replaced by a Protestant. Once James II was gone, so was the Dominion of New England.

How the Dominion Came About in the First Place

We'll start out with what territory it would eventually include. From north to south; a small part of Maine, the Province of New Hampshire, Massachusetts Bay Colony, Plymouth Colony, Colony of Rhode Island and Providence Plantations, Connecticut Colony, Province of New York, and the Province of New Jersey. Pennsylvania and Delaware were not part of the new Dominion.

What about the reason? Less to save money through a smaller, streamlined administration, than to make sure the burgeoning trade of the northern colonies, and their increased manufacturing capacity, did not threaten English merchants. They had less problem with the southern colonies of Virginia, i.e. Jamestown, due to their reliance on trading raw material, i.e. tobacco, cotton, etc. The thought of a big powerful one size fits all colonial domininion was to thwart and manage that. The colonists, of course, hated the idea of taking their liberty and commerce away from them.

King Charles II had intended to create the Dominion, and successor King James II agreed. A provisional commission was issued to Joseph Dudley on October 8, 1685. It would be an interim appointment, Dudley as a placeholder for Sir William Andros. Dudley was the son of an original Massachusetts Bay founder, graduate of Harvard, and a commissioner during King Philip's War. The appointment and charter arrived on May 14, 1686; Dudley took charge of the entity as President of the Council of New England on May 25.

His tenure, with assistance from Crown agent Edward Randolph, saw modest appointment to the judiciary, an attempt to introduce the Church of England to the colonies, and difficulty getting the colonists to pay their taxes, although he did attempt to enforce the Navigation Acts, albeit with moderation as well. He did not have the authority in his commission to enact new taxes.

By December 20, 1686, the preferred administrator, Sir William Andros, that former New York colonial governor, had arrived. The colonists disliked him almost immediately, but they also began to dislike Dudley as well. He had been appointed as judge on the superior court, and was complicit in enforcing the new regulations on taxes, meetings, and land titles. One of those measures was a penny per pound tax on imports, estates, and poll taxes that Andros had instituted in March 1687, against council wishes, making it law without a vote.

By December of 1688, the Glorious Revolution had removed King James II from the throne in England. When word that King James II was gone reached the colonies in April 1689, the citizens demanded that Andros be arrested. Both Andros and Dudley were eventually jailed, then transferred to London. Once there, London agents dismissed the charges.

The experiment with the Dominion of New Engand was dismissed, too. Each colony essentially went back to business as usual prior to its creation, albeit with considerable charter, or no charter, issues.

Select Text about Dominion from ""The Public Life of Joseph Dudley"

"Two days later Randolph landed in Boston, bringing with him the exemplification of the judgment against the charter, and the commission for the new government. He at once went to Roxbury to consult with Dudley concerning his procedure. The judgment and the commission were shown to a few of the Council, through whom the news spread; so that on the following Sunday, Mr. Willard prayed "not for the Governour or Government, as formerly; but spake so as implied it to be changed or changing. It seems Mr. Phillips at the Old Church prayed for the Governour and Deputy Governour." Together Randolph and Dudley drew up the summons to the members of the Council and made ready to assume the government. The members of the General Court, though long prepared, made no resistance, but contented themselves with trying to persuade Dudley not to accept the commission, and so to keep the government in their own hands. Failing in this, they broke up, "with hopes that either some unhappie accident in affairs of state at home, or by dissension raised by their artifices among the members in this new government, they might prevaile so far as to dissolve this new constitution and then reassume the government, which to accomplish they are solissitouse."

Dudley himself had some doubts as to his reception. Early on the day set for his inauguration he sought the counsel of Increase Mather, and later in the day wrote to him that he never wanted his favor and advice so much, and desired that he might explain the reasons for his procedure at this crisis. Unable to gain so valuable an ally, he put on a bold front and met the Old Court. Entering from the left with several of his Council, he took his seat on the bench and addressed the members of the old government, who were seated on the north side of the chamber. He greeted them as "considerable gentlemen of this place and Inhabitants of all parts of the countrey," and informed them that he could no longer deal with them as the Governor and Court. He then displayed the exemplification of the judgment against the charter and the commission for the new government. He offered to show them his instructions from the king and letters from the Lords of Trade, but hoped that they would not argue about the commands contained in them. He disclaimed any intention of harboring thoughts of revenge because of the injuries he had received, and assured them that although no address of the Governor and Court could come to the ears of the king, yet he and his Council would assist in getting a hearing in England for what "they know requisite for this peoples good."

Image above: Painting titled Portrait of a Man, supposedly of Joseph Dudley, circa late 17th century, attribution to Peter Lely, but there is some doubt to that attribution. Courtesy Wikipedica Commons. Image below: Painting of King James II, circa 1650-1675, Peter Lely. Courtesy Bolton Museum and Art Gallery via Wikipedica Commons. Info source: historyofmassachusetts.org; "The Public Life of Joseph Dudley," 1911, Everett Kimball; Wikipedia. 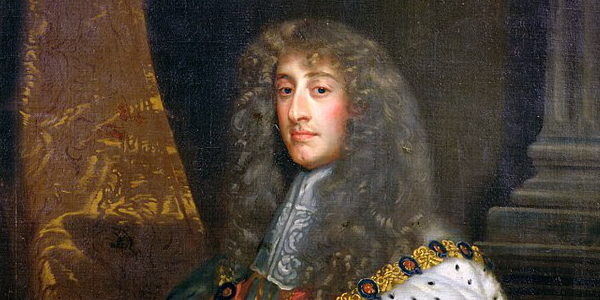