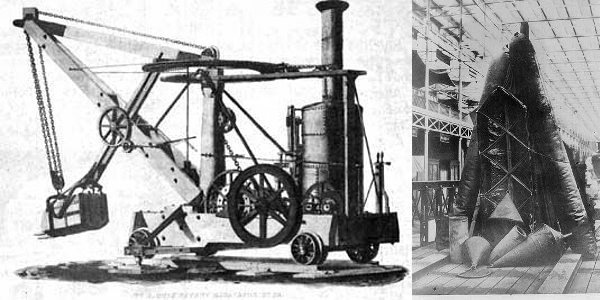 Although many think of the industrial revolution and the myriad of inventions created by American inventors that would propel the United States to the head of the pack in the late part of the 1800's, a series of inventions would begin to brew the storm in earlier years such as 1839. Through the creativity of inventors such as William Otis, Thaddeus Fairbanks, and Charles Goodyear, their patents and ingenuity would lay the groundwork for the next fifty years of industrial production that stunned the world at events such as the Philadelphia Centennial Exhibition of 1876 and in factories that began to pop up in all the great industrial cities of the northeast and midwest U.S.A.

William Otis and the Steam Shovel

No, this is not the Otis, Elisha, that invented the more famous elevator, but it is his cousin. William Smith Otis was a civil engineer from Philadelphia through Pelham, Massachusetts. On February 24, 1839, he was issued a patent, #1,089, for what the patent application called a steam shovel for excavating and removing earth. Technically, it was named the Crane-Excavator for Excavating and Removing Earth. The patent photo, which is now missing, showed the invention mounted on a railroad car. The patent was for a system of pulleys, crane, and use of the existing steam engine to lift earth in a bucket to waiting containers, i.e. railroad cars. Its capacity at the time, 380 cubic meters per day.

Not impressed by that capacity, then think of this. Prior to the Otis invention, digging a rail line was done by manual labor and mules. When William Smith Otis invented the steam shovel, which, beyond not having the ability to swivel three hundred and sixty degrees like today's machines, was very similar to that used in modern construction, there was no powered construction machine then in use. And it would precede the invention of any other earthmoving construction machinery by decades.

The first use of the steam shovel occurred in 1835 when Otis used his invention on the Western Railroad, i.e. the Boston and Albany Railroad, between Norwich and Worcester. He was a partner in the construction company and a bonus was available for quick completion of the line. An invention was born to collect the extra cash. In 1836, a pre-production model was made. Also that year the initial patent was filed on June 15, but not valid until the 1839 date due to its loss at the patent office. The patent would last for forty years with manufacturing of the shovels done by the Globe Iron Works in Boston. Was the steam shovel an immediate hit with everyone? No. Cheap immigrant labor, both from the laborers and some in the construction industry standpoint, disliked the idea.

Thaddeus Fairbanks and the Platform Scale

Thaddeus was an inventor from Brimfield, Massachusetts, born in 1796, who, along with brother Erastus, started an iron foundry to manufacture stoves, plows, and farming equipment in 1824. Within six years, Thaddeus Fairbanks became very interested in the production of hemp, founding the St. Johnsbury Hemp Company, but needed an accurate way to weigh it, which did not exist at the time. A platform scale was needed that could weigh heavy objects, and that's what Thaddeus invented. An initial patent was granted in June 1832. E. and T. Fairbanks Company was formed in 1834, later known as Fairbanks Morse, and had a big hit on their hands, selling thousands of these scales to industries as diverse as the marine and railway industries. The company would become the largest company in the United States, doubling in volume every three years from 1842 to 1857, until it was eclipsed by Henry Ford and Ford Manufacturing its cars in the 1920s.

So why is this listed in inventions of 1839 and not another year? Good question. Many think the actual invention of the platform scale occurred in 1830, with that initial patent in 1831 and updates in 1832, and reissues in 1834 and 1837. Between those dates and 1857, Thaddeus Fairbanks would be granted forty-three patents for various kinds of platform scales, scale parts, and other items. So what patent was actually granted to Fairbanks in 1839. To be honest, we're not certain yet. We do know that Congress issued them a rebate on seven patents on February 6, 1839, but there's no listing in Google Patents for this year. These guys were patent busy, however, and various sources list 1839 as a date for Fairbanks and a platform scale invention.

Thaddeus Fairbanks, however, would not just be known for his scales and company that manufactured them. He would found the St. Johnbury Academy in 1842. The Vermont school still exists today as one of the best private non-proft 9-12 grade schools in the country. It accepts its one thousand students with one of the oldest voucher systems in use.

Goodyear was a chemist and manufacturing engineer born in New Haven, Connecticut, a descendent of one of the founders of the New Haven colony in 1638. By 1824, Charles had begun the manufacture of farm implements, at first successful, then a struggle. By the early 1830's, Charles Goodyear had become intrigued by natural rubber or gum elastic. Through the decade, Goodyear experimented with various compounds, began to manufacture rubber shoes and life preservers, but lost it all in the Panic of 1837. In 1839, Goodyear stumbled onto a process to make rubber shoes that would last when he combined rubber and sulphur, which hardened and did not melt the rubber. It took several years to perfect the process, with Goodyear establishing the Naugatuck India-Rubber Company in 1843, and being granted a patent for the process in 1844. He licensed the process to other manufactures, Uniroyal and Keds sneakers for one, but continuously had to battle patent infringements and did not become a rich man.

Image above: Montage of a drawing of an early Otis steam shovel, date unknown. Courtesy Pinterest, and photo of the Charles Goodyear exhibit of an India Rubber Boat at the London International Exhibition of 1851, 1851, Claude-Marie Ferrier or Hugh Owen, Reports of the Juries, Spicer Brothers, 1852. Courtesy Library of Congress. Below: Factory in Saint Johnbury, Vermont of Thaddeus Fairbanks and Fairbanks Morse. There were forty buildings in the factory complex with twenty-three acres of floor space, 1969, Jack E. Boucher, Historic American Buildings Survey. Courtesy Library of Congress. Info Source: Association of Equipment Manufacturers; Farmcollector.com; Mining Foundation of the Southwest; Wikipedia Commons, Library of Congress; Fairbanks.com; Midcontinent.org; Connecticuthistory.org. 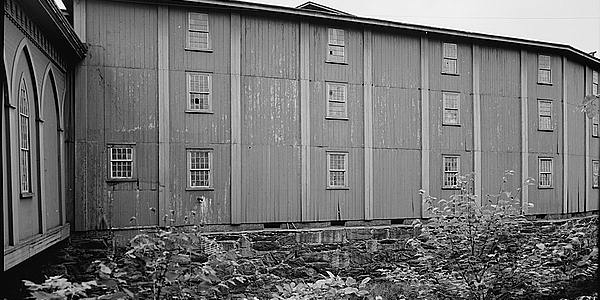