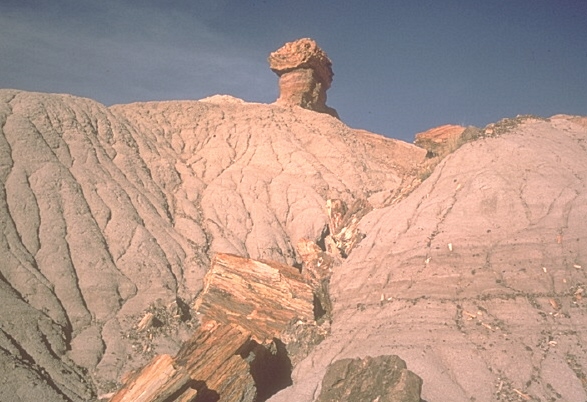 One thing you'll notice about Petrified Forest National Park might be something you hadn't expected; this place is prehistoric. When you've come for petrified logs, and not really knowing why they were petrified in the first place, the existence of Indian ruins, two million year old fossils, and the painted desert with its awesome colors and sometimes fog, comes as a pleasant surprise. Of course, some of you will know that before you visit, but for others, well ... it's a treat. Visiting Petrified Forest begins at one of the two entrance stations; from the north off Interstate 40 and the Painted Desert Visitor Center; from the south off Rt. 180 near the Rainbow Forest Museum. In either case, you can travel down the park road that connects the two and catch the sights along the way. And just how did those living trees turn into petrified forests? Well, we won't get into the specifics here, but let's just say that some two hundred million years ago, the trees were washed down an ancient river, buried quick, infused with volcanic ash, and became quartz. That's where you get the colors. For more detail, take one of the great walks and talks by the park rangers when onsite. There's a whole lot of history in the story, and you'll be witnessing the history, as well as listening, at every turn of the park, too.

The History- It's an archaelogical wonder, with artifacts dating back thousands of years, including those petrified trees plus objects from Hope and Navajo cultures, plus the Anasazi, Mogollon, and Sinagua sites. Puerco Pueblo, the ruins of the ancestral Puebloan, shows how their culture lived between 1200 and 1400 AD. It is located near the midpoint of the park. The Agate House, built from pieces of petrified wood, was built around 1100 AD. It is located in the area of the Rainbow Forest Museum.

How did Indian culture think of the petrified wood? For the Paiute they believed the logs were arrow shafts of the thunder god Shinuav. For the Navajo, they thought the logs were the bones of the monster Yietso.

But the history does not stop there, and for those that like a little modernity in their history, there in the history of the Civilian Conservation Corps and Route 66, plus the history of the park itself, which began as the Petrified Forest National Monument in 1906, before becoming a national park in 1962. 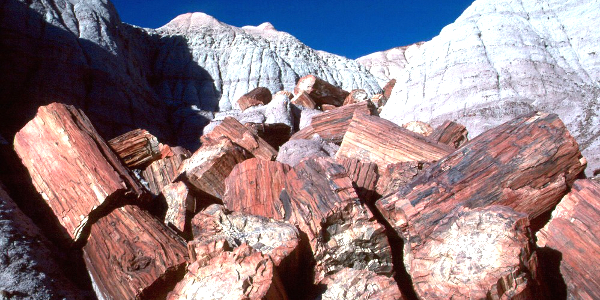 Another surprise is that the ecosytem is not desert, but grassland. Somebody tell the Spanish explorer who named the place the Painted Desert that he may have been inaccurate. Today there are many sites to see and guided or unguided walks to take. From the Painted Desert Visitor Center to the Painted Desert Inn, from Route 66 to Puerco Pueblo ruins of a 100 room abode, to the forest of Crystal, Giant Logs, Long Logs, or a house made of petrified pieces, Petrified Forest National Park will provide a very different experience for most travelers, and probably a bit different than you thought before you came.

The Hikes - Six main trails take you to some of the best locations and range in difficulty and length.

Puerco Pueblo Trail - 0.3 mile. Takes you through the ruins of the 100 room pueblo, as well as petroglyphs.

Giant Logs - Less than 1/2 mile. This is where the largest logs exist, including Old Faithful, which is nearly 10 feet wide.

Long Logs/Agate House Trails - 2.6 miles total, but can be walked separately. Near the Rainbow Forest Museum. The Agate House is built from pieces of petrified wood. 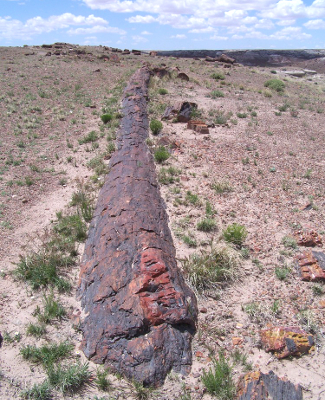 1. Take a road trip down the park road between I40 and Rt. 180. It takes you past or near all the major sites, including the Puerco Pueblo ruins and the petrified wood. Distance 28 miles.

2. Take the time to watch the 20 minute film at the Painted Desert Visitor Center or the Rainbow Forest Museum, titled Timeless Impressions.

3. Don't miss the Giant Logs walk outside the Rainbow Forest Museum. It's less than a half mile long, but takes you past some of the biggest petrified wood around. One log, Old Faithful, is 10 feet wide. No, it doesn't sput steam, but that would be cool, wouldn't it! Now don't tell me you weren't thinking the same thing. 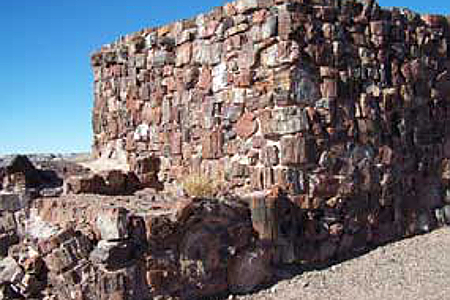 Visitor's Centers and Museums
Painted Desert Visitor Center - Off Interstate 40. Serves as park headquarters and includes the orientation film, exhibits, and just north of the center, the historic Route 66.

Rainbow Forest Museum - Several miles inside the southern entrance, the museum includes the orientation film, exhibits, and is the starting point for the Giant Logs, Long Logs, and Agate House trails.

Photo above: Agate House at Petrified Forest. It was built with petrified logs over nine hundred years ago. Courtesy National Park Service. 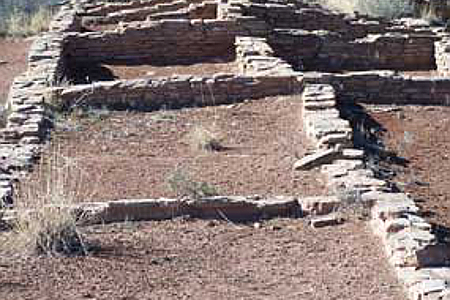 There are no lodging and camping facilities in Petrified Forest National Park, but those facilities exist in the towns and area outside the park. Check your favorite online travel site or the local tourist agencies and board for the choices that meet your needs. Backcountry camping is available in the park Wilderness Area with a free permit.

Photo above: Remnants of the walls of Puerco Pueblo, built and lived in from 1250 A.D. for approximately one hundred and thirty years. Courtesy National Park Service. 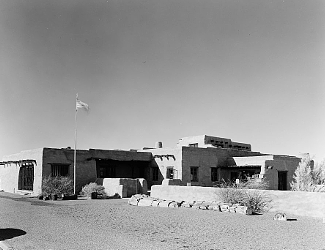 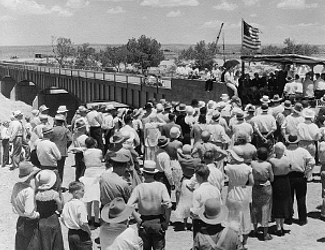