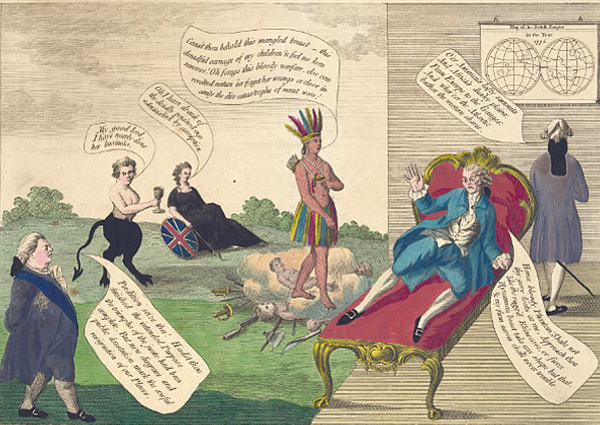 The American Revolution was ongoing, engaged primarily in the South through 1782, as well as on the high seas against French and Spanish forces around the world. Lord North, aka Frederick North, 2nd Earl of Guilford, had been the Prime Minister throughout the war, from January 28, 1770 to this year. Great Britain was at its height after the Seven Years Wars had brought them new territory and prestige. Therefore, Lord North took over the reigns of government as a friend of King George III at a time of good tidings.

However, despite that success, and the wedge now drawn between their two Europeans adversaries, France and Spain, the beginning of Lord North's Prime Minister career would lead to complacency and a belief that the colonial affairs of England would be left to their own desires. They were wrong.

Once the American Revolution broke out with the Battle of Lexington in 1775, Lord North and his cabinet began harsh measures against the colonies, i.e. the Stamp Act, the Intolerable Acts, Tea Taxes, and the like, which did not lead to a squashing of American spirit and rebellion, as he had thought, but led to renewed fervor and spirit to be independent.

When France signed their alliance with the American cause, the Treaty of Amity and Commerce in 1778, and Spain joined the fray in 1779, the initial complacency and thought that the colonies would be left alone to English desires, was completely lost. With the ensuing years bringing increased capacity amongst the troops of George Washington and his Continental Army, it also brought allies to the American cause into the fray, not only on American soil, but in battles in the West Indies and Morocco. Despite some success in the British southern strategy, the eventual defeat of Cornwallis at Yorktown on October 19, 1781, and the news of the defeat subsequently reaching Lord North, ended any thought of victory. On December 21, 1781, Lord North spoke to the House of Commons, ...

"... that it would not be wise nor right to go on with the American war as we had done."

"Peace with America seems necessary, even if it can be obtained on no better terms than some federal alliance, or perhaps even in a less eligible mode."

The King, however, still thought the conflict could be won, not wishing to acknowledge American independence, and did not want Lord North to resign.

On February 27, 1782, the opposition in the House of Commons voted to end the war. On March 20, 1782, Lord North was forced into resigning by the threat of a vote of no confidence, after much debate on the measure and previous attempts to oust him. His efforts at proposing a Conciliation Plan to George Washington and the American cause had fallen flat; the Continentals no longer wanted to reconcile, they wanted independence. King George III accepted the resignation, granted him an annuity of L4,100.58, and wrote to Lord Nelson on March 27.

"I ever did and ever shall look on you as a friend as well as faithful servant."

Lord North Prior to the American Revolution

Lord North was educated at Eton College and Trinity College, Oxford, ending his studies in 1750, then traveled extensively through Europe for four years. Only twenty-two years old, on April 15, 1754, Lord North was elected to parliament from Banbury, and joined the government in 1759 as Junior Lord of the Treasury. Neither Whig or Tory, his sympathies became more in line with the latter, rejoining the Pitt administration as Joint Paymaster of the Forces, Privy Counsellor, Chancellor of the Exchequer, and Leader of the Commons.

In 1770, Lord North succeeded the Duke of Grafton as Prime Minister, offered the post by King George III. He was only thirty-seven years old upon the appointment.

Photo above: Engraving of Lord North in a comic depicting the atrocities against America, 1780, D. Wilson. Below: Painting of the Relief of Gibraltar by Earl Howe, October 11, 1782 by Richard Paton, after 1782. Courtesy Wikipedia Commons, National Maritime Museum. Sources: Worldhistoryproject.org; ouramericanrevolution.org; American History From Revolution to Reconstruction and Beyond, http://www.let.rug.nl/usa/, Biography of Lord Nelson; historyofparliamentonline.org; Wikipedia Commons.