January 3, 1786 - The Treaty of Hopewell is signed between representatives of the Confederation Congress of the United States and the Indian nation of the Choctaw, originally located in the southeastern states of Mississippi, Alabama, and Louisiana and known as one of the five civilized tribes. 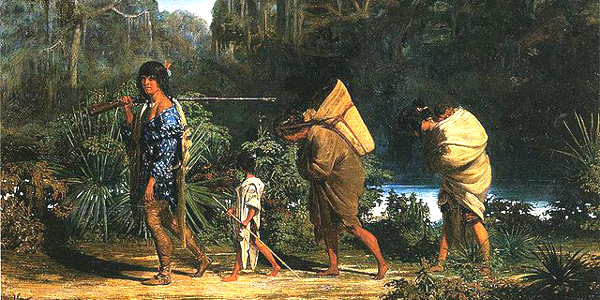 There were three treaties at Hopewell Plantation between the tribes of the region, Cherokee, Choctaw, and Chickasaw at the end of 1785 and early 1786 between themselves and representatives of the United States. The second occurred on January 3, 1786 between Benjamin Hawkins, a former and future member of the Continential Congress and later Senator and General Superintendant for Indian Affairs, and representatives of the Choctaw nation. In 1785 and 1786, Hawkins was working on behalf of the Continental Congress. The Choctaw treaty followed the format of the first Treaty of Hopewell between Hawkins and a gathering of 918 Cherokee on November 28, 1785, which among other tenants, established a western boundary for citizen settlement. It was already being breached.

The treaties were signed on a plantation owned by Andrew Pickens known as Hopewell under the Treaty Oak. The oak is no longer there, replaced by the Treaty Oak Monument. The plantation was located on the Seneca River in northwest South Carolina and is now owned by Clemson University. Pickens himself had been a militia leader in the Continental Army during the American Revolution, hero at the Battle of Cowpens, and would serve in the House of Representatives from 1793-1795. He would also, as with Benjamin Hawkins and Joseph Martin, witness the third treaty in the series between the Continental Congress and the Indian nation of the Chickasaw on January 10, 1786.

How did the treaties work out for the Indian nations? Right off the bat there were claims that white settlers were already over the boundary lines. Soon afterwards, the Cherokee phrase, Talking Leaves, denoted that treaties with white settlers were only good as long as the Americans wanted them. After that they would blow away like talking leaves. Disputes continued, new treaties signed, and eventually a Trail of Tears would remove most of the tribes of the southeast to the Oklahoma and other western territories under the terms of the Indian Removal Act of 1830. This included all three of the tribes that signed the Treaties of Hopewell.

Owned by Clemson University atop a hill overlooking Hartwell Lake, it had been the home of Andrew Pickens from 1785-1815, and his son, two governors, and one U.S. Congressman after that. In 1830, Clemson took over the property. Today the home can be visited by appointment and the site of the marker and treaty is open daily, managed by the Clemson Experimental Forest.

Articles of a treaty concluded at Hopewell, on the Keowee, near Seneca Old Town, between Benjamin Hawkins, Andrew Pickens and Joseph Martin, Commissioners Plenipotentiary of the United States of America, of the one part; and Yockonahoma, great Medal Chief of Soonacoha; Yockehoopoie, leading Chief of Bugtoogoloo; Mingohoopoie, leading Chief of Hasooqua; Tobocoh, great Medal Chief of Congetoo; Pooshemastubie, Gorget Captain of Senayazo; and thirteen small Medal Chiefs of the first Class, twelve Medal and Gorget Captains, Commissioners Plenipotentiary of all the Choctaw Nation, of the other part.

ARTICLE II. - The Commissioners Plenipotentiary of all the Choctaw nation, do hereby acknowledge the tribes and towns of the said nation, and the lands within the boundary allotted to the said Indians to live and hunt on, as mentioned in the third article, to be under the protection of the United States of America, and of no other sovereign whosoever.

ARTICLE V. - If any Indian or Indians, or persons, residing among them. or who shall take refuge in their nation, shall commit a robbery or murder or other capital crime on any citizen of the United States of America, or person under their protection, the tribe to which such offender may belong, or the nation, shall be bound to deliver him or them up to be punished according to the ordinances of the United States in Congress assembled: Provided, that the punishment shall not be greater than if the robbery or murder, or other capital crime, had been committed by a citizen on a citizen.

ARTICLE VII. - It is understood that the punishment of the innocent, under the idea of retaliation, is unjust, and shall not be practiced on either side, except where there is a manifest violation of this treaty; and then it shall be preceded, first by a demand of justice, and if refused, then by a declaration of hostilities.

ARTICLE VIII. - For the benefit and comfort of the Indians, and for the prevention of injuries or oppressions on the part of the citizens or Indians, the United States in Congress assembled, shall have the sole and exclusive right of regulating the trade with the Indians, and managing all their affairs in such manner as they think proper.

ARTICLE IX. - Until the pleasure of Congress be known, respecting the eighth article, all traders, citizens of the United States of America, shall have liberty to go to any of the tribes or towns of the Choctaws, to trade with them, and they shall be protected in their persons and property, and kindly treated.

ARTICLE XI. - The hatchet shall be forever buried, and the peace given by the United States of America, and friendship re-established between the said states on the one part, and all the Choctaw nation on the other part, shall be universal; and the contracting parties shall use their utmost endeavors to maintain the peace given as aforesaid, and friendship re-established.

In witness of all and every thing herein determined, between the United States of America and all the Choctaws, we, their underwritten commissioners, by virtue of our full powers, have signed this definitive treaty, and have caused our seals to be hereunto affixed.

Done at Hopewell, on the Keowee, this third day of January, in the year of our Lord one thousand seven hundred and eighty-six. 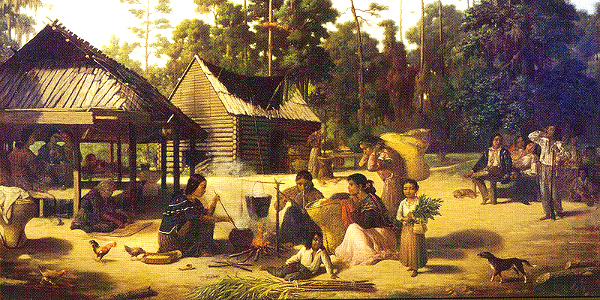