November 18, 1883 - Five standard time zones are established by the United States and Canadian railroad companies to end the confusion over thousands of local time zones. 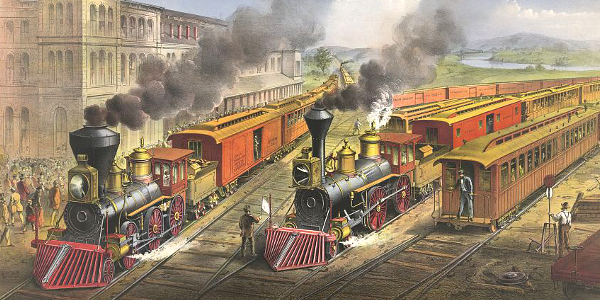 There was a time when the railroad industry was so huge, they controlled the agenda in the United States. A time when men who owned a railroad could basically change time. Men like William Henry Vanderbilt, owner of the New York Central Railroad, Cyrus West Field, owner of the New York Elevated Railroad, and Jay Gould, owner of the Union Pacific, were known as modern colossus of society with cartoons depicting them (see below) and the ability to create two noons. What was the Day of Two Noons? It was the day of November 18, 1883, when the push of those railroad men and others changed the notion of time in every city of the United States and Canada, so that all clocks, no matter what noon they were currently on, was changed a second time to the noon of one of those new five time zones.

Prior to 1883, there was no such thing as standard time. Each town in the United States and Canada marked their time individually according to the mean solar time, dependent on longitude, of the city in question. Essentially, this was the time the sun passed their local meridian, adjusted for the equation of time per the date involved. Boy, did this cause a problem for the railroad industry, and the communications, telegraph, industry. Each station in each area might be six minutes or fifteen minutes or twenty-two minutes different from another on the line. In actuality, the times could vary by as much as fifty minutes. Passengers were confused; there were three hundred time zones to calculate and coordinate when traveling. At first the railroad industry attempted to adjust the three hundred down to one hundred. This was only a slightly better solution to a vexing problem.

To better illustrate this problem, a passenger going from Maine to California would have to change their watches twenty times to get the right local time. A quote from the article "The Day of Two Noons," explains the dilemma.

How Things Began to Change

At first, it was not the railroad industry that proposed a change to the confusing aspects of time in every town, it was a education man, Charles F. Dowd, from Saratoga Springs, New York, who thought four time zones, 15 degrees longitude wide, made sense in 1863. He ran the idea past the railroad industry six years later, and wrote a pamphlet in 1870, "A System of National Time for Railroads." The railroad industry essentially ignored him.

Another man, again not from the railroad industry, Cleveland Abbe, a meteorologist from the Cincinnati Observatory and first chief meteorologist at the U.S. Weather Bureau in 1871, established four time zones for his weather reports, publishing the paper, "Report on Standard Time," in 1879. This paper helped convince the railroad company to push for standard time. Some reports state that it was mostly his system that was later adopted below, although it should be credited to all, including others such as Sir Sanford Fleming, chief engineer of the Government Railways of Canada, and Dr. Thomas Hill.

However, the railroads chose another version by William F. Allen, editor of the Traveler's Official Railway Guide, and Secretary of the General Time Convention of the Association of American Railways. On October 11, 1883, they adopted his plan. The borders would run through stations, with original names Intercolonial, Eastern, Central, Mountain, and Pacific. Within one year of the Day of Two Noons, eighty-five percent of the largest two hundred towns used his system of standard time. One large exception was Detroit, who did not agree to a time zone until 1900, when it chose Central Time, then changed its mind in 1915, preferring Eastern Time from that moment forward.

Reaction of the Public

Newspaper reports had differing opinions on what the country thought of the Day of Two Noons.

Indianapolis Sentinel - "The Railroad Convention, recently in session, determined among other things to have the clocks and watches in the United States set, run and regulated to suit the convenience of their particular branch of business. It was a bold stroke. To regulate the time of this Empire Republic of the World is an undertaking of magnificent proportions. Railroad time is to be the time of the future. The sun is no longer to boss the job. People - 55,000,000 of them - must eat, sleep and work as well as travel by railroad time. It is a revolt, a rebellion. The sun will be requested to rise and get by railroad time. The planets must, in the future, make their circuits by such timetables as railroad magnates arrange."

New York Herald - "Five days before Standard Time was to go into effect, the Attorney General of the United States issued an edict that government departments had no right to adopt railroad time until authorized to do so by Congress. However, this edict did not prevent the railroads from putting Standard Time into effect. But apparently the Attorney General could not or would not believe they would do so, for a few hours after Standard Time went into effect, he went to the railway station to take the train for Philadelphia and was astonished to find that he was 8 minutes too late."

Founder of the Ball Railway Time Service, Avebb C. Ball - "In one place, I visited a venerable inhabitant - a local literary character - who flourished his hickory cane over my head, saying, "Damn old Vanderbilt's time! We want God's time! The Vanderbilts cannot run me if they run the rest of the country, by Jehosephat!"

Choice of time zone ended when Congress passed the Standard Time Act of March 19, 1918, which also included the concept of Daylight Savings Time, although that idea was not fully settled, even with the 1918 act.

An Act To save daylight and to provide standard time for the United States.

Be it enacted by the Senate and House of Representatives of the United States of America in Congress assembled, that, for the purpose of establishing the standard time of the United States, the territory of continental United States shall be divided into five zones in the manner hereinafter provided. The standard time of the first zone shall be based on the mean astronomical time of the seventy fifth degree of longitude west from Greenwich; that of the second zone on the ninetieth degree; that of the third zone on the one hundred and fifth degree; that of the fourth zone on the one hundred and twentieth degree; and that of the fifth zone, which shall include only Alaska, on the one hundred and fiftieth degree. That the limits of each zone shall be defined by an order of the Interstate Commerce Commission, having regard for the convenience of commerce and the existing junction points and division points of common carriers engaged in commerce between the several States and with foreign nations, and such order may be modified from time to time.

SEC. 5. That all Acts and parts of Acts in conflict herewith are hereby repealed. 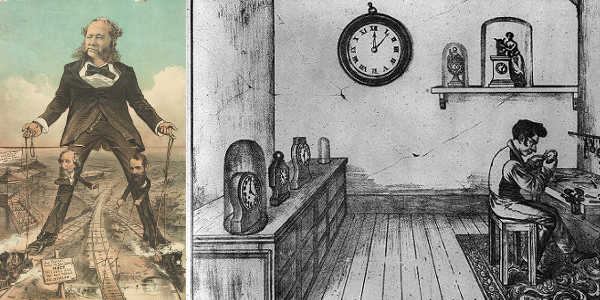