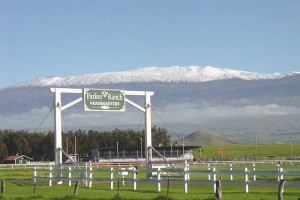 When a young man jumped ship onto the Hawaii shores in 1809, it seemed doubtful that the nineteen year old man would become friends with King Kamehameha I, the Hawaiian emperor and warrior, but that's just what John Palmer Parker did. He became a trusted ally of the king, eventually married his granddaughter, Chiefess Kipikane, worked in the cattle industry, and bought land below Mauna Kea to start a cattle ranch on January 8, 1847. The ranch grew within several years to thousands of acres and today still exists, through the efforts of the Parker Ranch Foundation Trust, a working ranch that can be visited, horseback ridden (currently not available), and shopped at the Parker Ranch Store. So if you're ever in the area of Hawaiian Volcanoes National Park and need an extra historic site and adventure to visit, consider making Parker Ranch that stop for an interesting take on ranching, Hawaii, and the friendship of a king. Photo above: Parker Ranch with Mauna Kea in the background. Courtesy Wikipedia Commons. 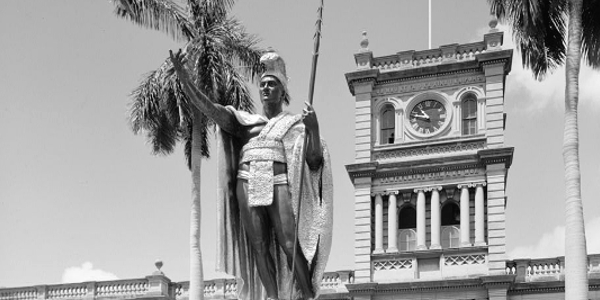 Now over one hundred and thirty thousand acres, the Parker Ranch is one of the largest cattle ranches in the United States. Its cowboys were known, and still are to many, as paniolos. Its legacy, which continues today, traces roots to the cattle of George Vancouver brought to the Hawaiian Islands in 1888 and set free by the King to roam the Big Island and reproduce into thousands, through the last days of the Kingdom of Hawaii, and into the twenty-first century under management of a trust that continues its production.

The ranch has encountered many incarnations and continued expansion during each era. Its owners, from descendents of John Palmer Parker to its managers, would diversify into sugar production on other lands, and expand into horse breeding. During World War II, acreage was leased to the U.S. Army for Camp Tarawa, with fifty thousand troops stationed there, training for the eventual invasion of Japan.

Today you can visit the historic homes and acreage of the Parker Ranch, stay at the Mauna Kea Beach Hotel on land leased from the estate, and take in a play at the Kahilu Theater, started by the last Parker family owner, Richard Smart, an actor and musician.

Image above: Statue of King Kamehameha, Honolulu, Historic American Buildings Survey. Courtesy Library of Congress. Below: Two historic homes on Parker Ranch that can be visited on a self-guided tour. Courtesy Parker Ranch. 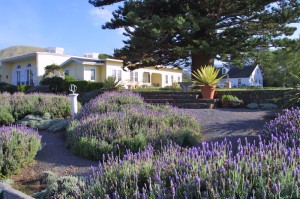 The Palmer Ranch headquarters is located at 66-1304 Mamalahoa Highway, Kamuela, HI 96743 on the island of Hawaii. That address is off Highway 190. You are around 80 miles from Hawaii Volcanoes National Park and the drive from one to the other takes a bit over an hour and one half. It's one beautiful drive through Upper Waiakea National Forest Preserve and Hilo Forest Preserve. It also passes Manua Kea.

The Bishop Museum, a repository of much of the history of Hawaii's cattle industry and other Hawaii heritage (see below) is located at 1525 Bernice Street, Honolulu, Hawaii 96817 on the Island of Oahu.

Parker Ranch and its 130,000 acres spreads below the vista of Mauna Kea. Open for tours during the week, it also hosts a July 4th Rodeo and Races on a historic racetrack on the grounds. Two historic homes are open to visit, Puuopelu and Mana Hale. The Parker Ranch Store is also a treat.

The Bishop Museum is open year round in Honolulu with exhibits on not only Hawaii's cattle industry, but basically everything else Hawaii oriented from nature to history.

Parker Ranch is open Monday to Friday 8:00 a.m. to 4:00 p.m. The Parker Ranch Store may have different hours. A self-guided tour of the two homes, Mana Hale and Puuopelu, and a twenty minute video are free of charge. Horse back riding tours are currently not available on site.

It's Hawaii. There's so much to see, you might as well just plan on living there. Okay, but that's expensive. If you've made it to Parker Ranch and the island of Hawaii, then you're likely heading to Hawaiian Islands National Park, Puukohola Heiau National Historical Site, one of the beach resorts, or all those preserves. If you're back on Oahu and taking in the Bishop Museum, the historic sites of the World War II Memorial at Pearl Harbor and surrounding attractions is nearby, plus the Honolulu Zoo and Moanalua Gardens. 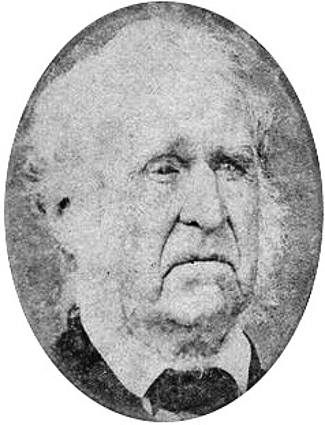 Originally from New England, Parker, at the age of nineteen, decided to head to the Pacific Ocean, debarking a ship by jumping off, then living in the Hawaiian islands, and China, for six years from 1809-1815. During the War of 1812, while in China, Parker bought an American musket (still owned by Parker Ranch), and when he returned to Hawaii, used it to shoot some of the cattle descendent from the gift to King Kamehameha from British Captain George Vancouver two decades before. The herd had needed to be thinned, having grown to thousands from the original six.

His marriage to the King's granddaughter, Chiefess Kipikane, in 1816, cemented his relationship to the Kingdom of Hawaii, and during the next decades, he worked in the cattle industry from a small farm on two acres in Kohala. In 1847, Parker bought his first major acreage, at three thousand five hundred feet in elevation, on part of the land that would become the Parker Ranch. He built his first house, Mana Hale, that you can still visit, developed orchards, ran a dairy, and continued to acquire acreage to expand the ranch that you now visit today. 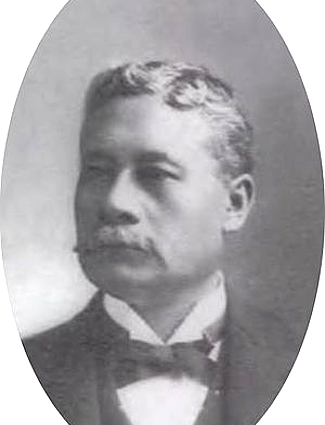 Samuel Parter was his grandson, who inherited part of the ranch at the age of fifteen. Born in 1853, Samuel studied at Oahu College, made social connections with Hawaiian nobility, and moved in circles political in nature. Although essentially a half owner in the ranch, Samuel Parker left its management predominantly to others. He thought that diversification into the sugar industry, a growing Hawaiian pursuit, would be good, and bought part interest in the Pa'auhau Plantation with an advisor to the Hawaiian governor in 1878, the Pacific Sugar Mill in 1879, and other real estate deals. This diversification would lead to mismanagement and eventual trusteeship for the ranch as Samuel Parker paid more attention to a growing political career.

In 1883, he joined the Privy Council of King Kalakaua, and represented the Kingdom of Hawaii at the World Cotton Exposition in New Orleans in 1884. Samuel Parker would become a member of the House of Nobles, as well as hold Cabinet positions as Minister of Foreign Affairs and Minister of Finance. During the years leading to the annexation of Hawaii by the United States, Parker resigned (1892), only to be reappointed to the post of Minister of Foreign Affairs again in 1893. This would be the last appointed cabinet of the Kingdom of Hawaii. Within one month, American troops had been deployed denoting the effective end of the Kingdom. The Territory of Hawaii under American rule had begun.

The Parker Ranch continued its expansion during and after Parker's political career was done at the order of ranch manager Alfred Wellington Carter; Samuel Parker disagreed with much of the expansion. Carter was instrumental in expanding the brand of the Parker Ranch into breeding horses, which were sold to the mounted division of the U.S. Cavalry. 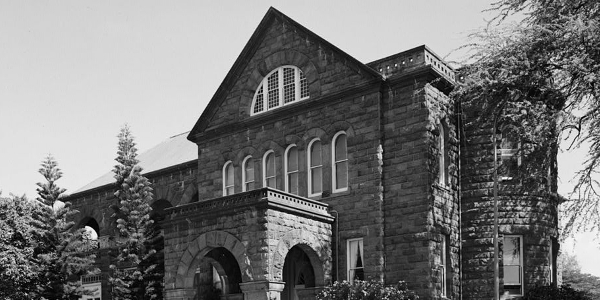 No, it's really nowhere near the Parker Ranch, as its location on the island of Oahu and Honolulu locale denotes, but it is closer to the spirit of the history of the ranch and ranching industry of Hawaii than you would think. Today, its mission is as the Hawaii State Museum of Natural and Cultural History. Inside, it holds a plethora of information about the political and natural history of the entire island chain in photos and exhibits of the Parker Ranch and more.

The museum was founded in 1889 as a memory to Princess Bernice Pauahi Bishop, the last heir to the Kamehameha Dynasty. Bishop Hall, now the main building of the museum, had originally been built for the campus of Kamehameha Schools, a boys school created at the request of Princess Bishop.