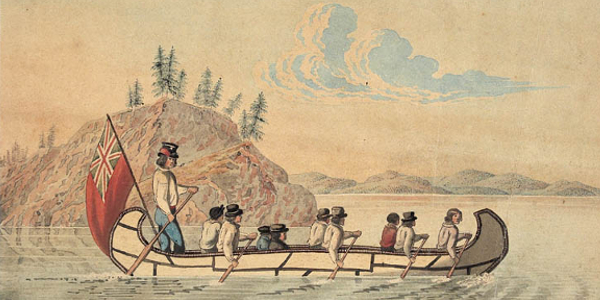 September 1, 1671 - Abraham Wood sends the Batts-Fallam expedition to the southern Appalachian Mountains and the area of the New River in today's West Virginia. When we think of exploration of the lands that would become the United States, we often harken back to the discoverers like Verrazano, de Soto, Coronado, Hudson, and the like. Those that came prior to permanent English settlement, except for Hudson. However, in some ways, the exploration out from the first permanent settlements, whether that be from St. Augustine, or Plymouth, or Jamestown, were some of the most dangerous and most fruitful in understanding just what this continent of North America held.

Two years earlier, Johann Lederer had led an expedition from the York River into the Appalachian Mountains at the behest of Colonial Governor Sir William Berkeley, who believed a passage to the west and Indian Ocean was only a few weeks away. It wasn't. But the Blue Ridge Mountains and the Shenandoah Valley were.

To men like Abraham Wood, discovering what was over the next ridge from Jamestown was in some ways a life long goal. Wood had emigrated to the colony as a boy, and by the age of fifteen, began working for Samuel Mathews. Ten years later, Wood had become a land speculator, trader and explorer. After a native uprising in the area in 1644, Abraham Wood was instrumental in defending Fort Henry, built in 1646 at the falls of the Appomattox River, in today's Petersburg. Eventually the government sold the six hundred acres of land, a trading post, and fort to Wood, which made him a wealthy man for the times. He would also serve in various posts in the government from 1644 to 1680.

But while his interest was in trade and government policy, his passion lent itself to explore the countryside around the Fort and into the mountains. Several exploration parties ventured out; Wood led personally one in 1650. By August 1650, Abraham Wood and Edward Bland had seen the Great Indian Warpath and the Roanoke River. In expeditions in 1664-5, Wood and his party supposedly discovered branches of the Ohio and Mesechaceba (unknown current name).

Abraham Wood had a desire to reach the southern Appalachian Mountains and put together a party, including Thomas Wood, Thomas Batts (Batte) and Robert Fallam. Abraham Wood did not take part. They were accompanied by Perecute, an Apomatock Indian, and Jack Nesan, formerly a servant to Abraham Wood. The expedition was a sanctioned excursion, a commission from the Virginia House of Burgesses ... "for finding out the ebbing and flowing of the water behind the mountains, in order to the discovery of the South Sea." They would not find it.

The party left Appomattox Town on September 1, 1671. Thomas Wood may have been Abraham's son. Thomas Batts was a possible relation to Nathanial Batts, the first settler to North Carolina with a busy trade post on Albermarle Sound.

"Septr 1. Thomas Batts, Thomas Woods, and Robert Fallam having received a comission from the Hon'ble Major General Wood for the finding out the ebbing and flowing Water on the other side of the Mountains, in order to the discovery of the South Sea, accompanied by Perecute, a great Man of the Apomatack Indians, and Jack Neasan, formerly Servant to Major General Wood with five horses set forward from the Apomatacks Town about eight of the Clock in the morning, being Friday, Sept 1st, 1671. That day we traveled about 40 miles, took up our quarters, and found, that we had travelled from the Okenechee path due West."

"Sept. 5. Just as we were ready to take horse and march from the Sapiny's about seven of the clock in the Morning we heard some guns go off from the other side of the River. They were seven Apomatack Indians sent by Major General Wood to accompany us in our voyage. We hence sent back a horse belonging to Mr. Thomas Wood, which was hired, by a Portugal, belonging to Major General Wood, whom we here found. About eleven of the clock we set forward and that night came to the town of the Hanathaskies which we judge to be twenty five miles from the Sapenys, they are lying west and by north in an island on the Sapony River rich land."

"Sept. 13. In the morning we set forward early. After we had travelled about three miles we came to the foot of the great mountain and found a very steep ascent so that we could scarse keep ourselves from sliding down again. It continued for three miles with small intermissions of better way. right up by the path on the left we saw the porportions of the mon. When we were got up to the top of the mountain and set down very weary we saw very high mountains lying to the north and south as far as we could discern. Our course up the mountain was west by north. A very small descent on the other side and as soon as over we found the vallies tending westerly. It was a pleasing tho' dreadful sight to see the mountains and Hills as if piled one upon another. After we had travill'd about three miles from the mountains, easily descending ground about twelve of the clock we came to two trees mark'd with a coal MANI. the other cut in with MA and several other scratchments.

Hard by a Run just like the swift creek at Mr. Randolph's in Virginia, emptying itself sometimes westerly and sometimes northerly with curious meadows on each (side). Going forward we found rich ground but having curious rising hills and brave meadows with grass about a man's height. many rivers running west-north-west and several Runs from the southerly mountains which we saw as a march'd, which run northerly into the great River. After we had travelled about seven miles we came to a very steep descent where we found a great Run (New River), which emptied itself in the great River (New River) northerly. our course being as the path went, west-south-west. We set forward and had not gone far but we met again with the River, still broad running west and by north. We went over the great run emptying itself northerly into the Great River. After we had marched about six miles northwest and by north we came to the River again where it was much broader than at the other two places. It ran here west and by south and so as we suppose round up westerly. Here we took up our quarters, after we had waded over, for the night. Due west, the soil, the farther we went (is) the richer and full of bare meadows and old fields.

They had reached the New River Valley and the New River and are credited with being the first Europeans in the present area of the state of West Virginia. The farthest point reached is thought to be Peter's Falls, at a point which the river goes through the Peters' Mountain. It would be near today's Pearisburg, Virginia. They returned to Fort Henry on October 1, 1671. Unfortunately, Thomas Wood died during the expedition, left behind in a town on September 6 with the flu.

"October 1. being Sunday morning we arrived at Fort Henry. God's holy name be praised for our preservation," Robert Fallam journal.

Today, the New River is part of the New River Gorge National River, a historic and recreation site administered by the National Park Service. It is geologically one of the five oldest rivers in the world and a tributary to the Ohio River.

Image above: New River Gorge and the New River from the mountains, 2015, Carol M. Highsmith. Courtesy Library of Congress. Image below: New River near Narrows, Va., 2018, jllackey. Courtesy Wikipedia Commons, C.C. 4.0. Info source: "A Journal from Virginia Beyond the Appalachian Mountains in Septr., 1671, Sent to the Royal Society by Mr. Clayton, and Read Aug. 1, 1688, Before the Said Society," William and Mary Quarterly, 1671, Robert Fallam Journal via Jstor; West Virginia Archives and History; Wikipedia.