January 4, 1782 - The Bank of North America opens its doors as Robert Morris, the superintendent of Finance, recommends the creation of a national mint and decimal coins. The bank, along with the Bank of New York and First Bank of the United States, will be the first entities to obtain shares on the New York Stock Exchange. Congress had established the Bank of North America on May 26, 1781 to stabilize the nascent financial stability of a nation at war. Now, less than one year later, it would open on January 4, 1782 (there is some debate about that date, with some historicans stating that the actual opening with active operations was January 7) after a difficult start at capitalization and an organization headed by Thomas Willing, the former Mayor of Philadelphia. There were six employees at the storefront on Chestnut Street in Philadelphia, a commodity store owned by the cashier Tench Francis and later bought by the bank, and what would seem odd tenants to start out. Accounts were kept in Mexican dollars. The shares of the bank, 63.3% of them, had been bought by one man, Robert Morris, albeit on behalf of the United States government. And how did he get the money? He borrowed it from France and the Netherlands.

But how would the Bank of North America operate in its effectively ten year history as the de facto national bank? It was open from 10:00 a.m. to 1:00 p.m., then 3:00 p.m. to 5:00 p.m. Within one year (1783), it would issue Bank of North America certificates; they could be used to pay national and some state taxes. The strength of the bank was in question early as the needs of the government far outweighed the $400,000 subscribed. They needed eight million dollars for 1782 alone. The United States borrowed more from the bank than, essentially, they had. Some states, particulary in New England, did not trust its notes, fearing the deflation that had been associated with the former Continental money. They often circulated the Bank of North America notes at ten to fifteen percent below par.

Eventually, by November 1782, these early troubles were overcome as full subscriptions were paid and specie arrived from Europe and the West Indies. States had begun to make laws declaring that Bank of North America notes should be accepted as payments for taxes. Connecticut approved this first on January 10, 1782. They backed up the efficacy of its national charter by applying and receiving one from the State of Pennsylvania.

By 1784, the Bank of North America was a stable institution, able to pay dividends on its stock at a rate of 14%.

SIR, - I have the honor to transmit herewith an ordinance passed by the United States, in Congress assembled, the thirty-first day of December, 1781, incorporating the subscribers to the Bank of North America, together with sundry resolutions, recommending to the several States to pass such Laws as they may judge necessary for giving the said ordinance its full operation. The resolutions of the 26th May last speak so clearly to the points necessary to be established by these Laws, that I need not enlarge on them. Should anything more be found necessary upon experience, the President and Directors will, no doubt, make suitable application to Congress, or to the States respectively, as the case may require. It afford me great satisfaction to inform your Excellency that this Bank commenced its operations yesterday, and I am confident that, with proper management, it will answer the most sanguine expectations of those who befriend the Institution. It will facilitate the management of the Finances of the United States. The several States may, when their respective necessities require, and the abilities of the Bank will permit, derive occasional advantage and accommodation from it. It will afford to the individuals of all the States a medium for their intercourse with each other and for the payment of Taxes, more convenient than the precious metals, and equally safe. It will have a tendency to increase both the internal and external Commerce of North America, and, undoubtably, will be infinitely useful to all the Traders of every State in the Union, provided, as I have already said, it is conducted on the principles of equity, justice, prudence, and economy. The present Directors bear characters that cannot fail to inspire confidence, and, as the corporation is amenable to the Laws, power can neither sanctify any improper conduct nor protect the guilty. Under a full conviction of these things, I flatter myself that I shall stand excused for recommending in the strongest manner this well-meant plan to all the encouragement and protection which your State can give consistently with Wisdom and Justice.

I have the honor to be, with great respect, Your Excellency's most obedient serv't,

The role of the Bank of America as its de facto central bank would be superceded by the establishment of the First Bank of the United States in 1791.

Who Were Tom Willing and Robert Morris

Thomas Willing - Born to a political family in Philadelphia (son of twice mayor Charles Willing and the granddaughter of its second mayor Edward Shippen), Thomas studied law in England and was a business partner of Robert Morris, establishing the inport/export firm Willing, Morris and Company in 1757, a partnership that lasted until 1793. Willing became Mayor of Philadelphia from October 4, 1763 to October 2, 1764, then served on the Supreme Court of the Colony of Pennsylvania in 1767. He became the President of the Bank of North American in 1781/1782 at fifty years of age, serving from its opening on January 7, 1782 to March 19, 1791.

Robert Morris, Jr. - Better known historically than Willing due his role as founding father and signer of the Declaration of Independence, Articles of Confederation, and U.S. Constitution, as noted above, he and Thomas Willing were business partners from 1757 to 1793. Morris became Superintendent of Finance when established by Congress in 1781 when the continental finances during the Revolutionary War were at its ebb, urging the creation of the Bank of North America. He would be succeeded in his position as Superintendent of Finance by Alexander Hamilton in 1784. Morris petitioned the Continental Congress for the establishment of a national mint and decimal coinage on January 15, 1782. His suggestions were approved on January 21, 1782. Dies were commissioned, but in the end, they were not implemented. Approval for the dollar as the basis for currency was approved in 1785, but again, the plan for the national mint was not again proposed until 1790. The national mint was fully established with the Coinage Act of 1792 when Morris was a Senator. In 1789, he had become one of the first two Senators, with William Maclay, from the State of Pennsylvania, serving for six years. 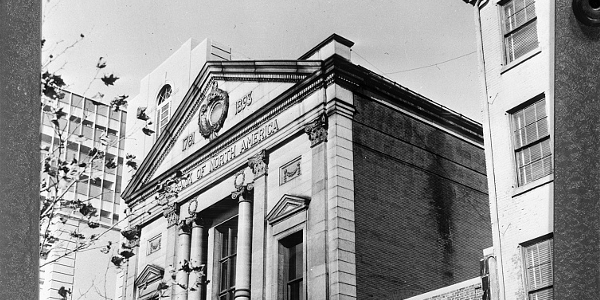