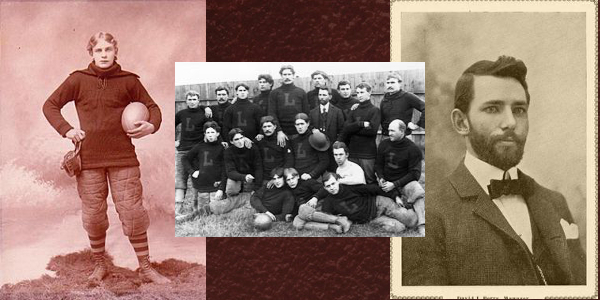 There had been semi-pro, independent, and amateur football players on teams outside the college ranks since 1888 at the Detroit Athletic Club. It spread quickly to other cities and clubs; from New York to Dayton, from Washington, D.C. to San Francisco, from Canton to New Orleans, from Oil City to Dallas. In 1894, the Jeannette Indians were formed. One year later, the Latrobe YMCA Athletic Club followed suit. Since Latrobe, Pennsylvania, east of Pittsburgh, was only sixteen miles from Jeanette, a game between these two clubs, now about to be partially professional, was bound to take place. On September 3, 1895, it did with John Brallier, a substitute quarterback for Latrobe, accepting $10, plus expenses, to openly play as a pro for their squad. Brallier had played for Indiana Normal (today's Indiana University of Pennsylvania), even though in high school, and had committed to playing for Washington and Jefferson University.

It started with a scheduling conflict. Quarterback Eddie Blair of Latrobe had another engagement that day (he played baseball for Greensburg) and Latrobe Manager Dave Berry was anxious to have a player take his place that could win the game against the Jeannette Indians. Berry was an initial promoter of the professional game, a manager, creater of the first All-Star game, and founder of the first pro league in 1902, the first National Football League (Today's National Football League would get its start in 1920). His day job was editor of the Latrobe Clipper newspaper.

Latrobe had been practicing at night at a vacant Pennsylvania Railroad lot with a street light nearby. Russell Auckerman, formerly a Gettysburg College player, was player coach, with Dave Berry as Manager. When John Brallier was convinced to play, he arrived the night of September 2 and practiced with the team. The next morning, a parade ensued down the Latrobe streets with Billy Showalter's Cornet Band and the two teams marching. A 4:00 p.m. that afternoon, Latrobe, in its Orange and Maroon uniforms, took the field at the YMCA. Jeannette won the coin toss, but seven minutes later Latrobe scored the first touchdown, an Auckerman run, with Brallier kicking the extra point. Score was 6-0. A thirty-five yard touchdown run later in the first half by Auckerman with Brallier kicking the field goal extra gave Latrobe a 12-0 lead and eventual victory.

Brallier would play one more game for Latrobe, then go off to college. His professional game did not affect his ability to win the quarterback job at Washington and Jefferson and play the 1896 season for them. Since the status between pro, semi-pro, and college was in constant flux, Brallier would play subsequent seasons for both college and pro teams; West Virginia University, Latrobe Athletic, Punxsutawney, then a dental school that would become part of the University of Pennsylvania. The University of Pennsylvania itself had wanted Brallier to play for them, but were too worried that his diminished amateur status would cause them scheduling problems. Brallier went back to pro play for Latrobe in 1902 through 1907. From 1903-1905, the Latrobe team went undefeated.

Today Brallier is not considered the first professional player, but the first player to openly admit it. William "Pudge" Heffelfinger of Allegheny Athletic Association, a former All-American Yale guard, had been previously paid handsomely for his services. On November 12, 1892, Heffelfinger had been paid $500, plus $25 expenses, to play for Allegheny.