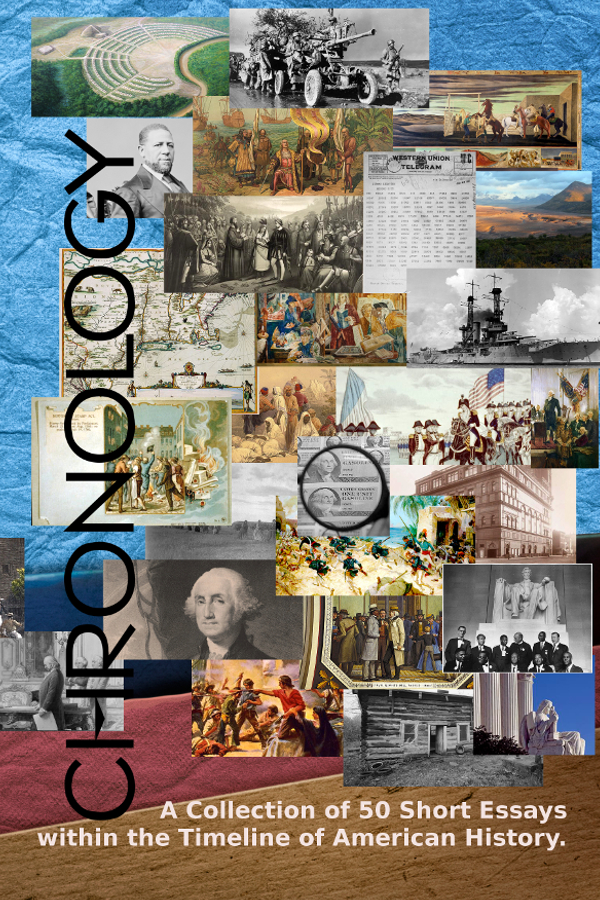 
Sponsor this page for $250 per year. Your banner or text ad can fill the space above.
Click here to Sponsor the page and how to reserve your ad.

January 14, 1950 - The United States recalls all consular officials from China after the seizure of the American consul general in Peking.
January 17, 1950 - The Brinks robbery in Boston occurs when eleven masked bandits steal $2.8 million from an armored car outside their express office.

June 25, 1950 - The Korean War begins its three year conflict when troops of North Korea, backed with Soviet weaponry, invade South Korea. This act leads to U.S. involvement when two days later, the United States Air Force and Navy are ordered by President Truman to the peninsula. On June 30, ground forces and air strikes are approved against North Korea.
June 27, 1950 - Thirty-five military advisors are sent to South Vietnam to give military and economic aid to the anti-Communist government.

November 26, 1950 - United Nations forces retreat south toward the 38th parallel when Chinese Communist forces open a counteroffensive in the Korean War. This action halted any thought of a quick resolution to the conflict. On December 8, 1950, shipments to Communist China are banned by the United States.

February 28, 1951 - Preliminary report from the Senator Estes Kefauver investigation that had begun on May 11, 1950 into organized crime is issued, stating that gambling take was in excess of $20 billion per year.
March 29, 1951 - Julius and Ethel Rosenberg were found guilty of conspiracy of wartime espionage and sentenced to death. They were executed June 19, 1953. Morton Sobell was also convicted of the crime and sentenced to thirty years in prison.

September 1, 1951 - The United States, Australia, and New Zealand sign a mutual security pact, the ANZUS Treaty.
September 4, 1951 - The inauguration of trans-continental television occurs with the broadcast of President Truman's speech at the Japanese Peace Treaty Conference in San Francisco. The treaty would be signed on September 8 by the U.S., Japan, and forty-seven other nations.

December 12, 1951 - Richard Buckminster Fuller files patent for the Geodesic Dome. The dome building, under his design, would be utilized in many futuristic constructions, particularly by Fuller in world exhibitions, such as his famous United States Pavilion at the Montreal World's Fair of 1967.

February 14, 1952 - The 1952 Winter Olympics open in Helsinki, Finland with thirty participating nations. During these games, the first triple jump in figure skating history is performed by Dick Button, who won one of the four gold medals gained by U.S. athletes.

April 8, 1952 - President Truman authorizes the seizure of United States steel mills in order to avert a strike, but his action is ruled illegal by the U.S. Supreme Court on June 2.
November 1, 1952 - At Eniwetok Atoll in the Pacific Ocean, the first hydrogen bomb, named Mike, is exploded.

November 4, 1952 - General Dwight D. Eisenhower, a newcomer to politics, but popular due to his role in winning World War II as European commander, gains an easy victory over Democratic challenger Adlai E. Stevenson. The Electoral College vote was 442 to 89.

April 25, 1953 - The description of a double helix DNA molecule is published by British physicist Francis Crick and American scientist James D. Watson. They, along with New Zealand born scientist Maurice Wilkins, were awarded the Nobel Prize in Physiology or Medicine for their discovery in 1962.

July 27, 1953 - Fighting ceases in the Korean War. The United Nations Command, including the United States, and the combatants North Korea and the Republic of China sign an armistice agreement.
August 19, 1953 - The United States CIA assists in the overthrow of the government in Iran, and retains the Shah Mohammad Reza Pahlavi to the throne.

October 30, 1953 - The Cold War continues in earnest when President Dwight D. Eisenhower approves a top secret document stating that the U.S. nuclear arsenal must be expanded to combat the communist threat around the world.

May 17, 1954 - Racial segregation in public schools is declared unconstitutional by the United States Supreme Court in Brown vs. the Board of Education. The ruling of the court stated that racial segregation violated the 14th Amendment's clause that guaranteed equal protection. The Monroe School in Topeka, Kansas had segregated Linda Brown in its classes.
September 8, 1954 - In Bangkok, Thailand, the Southeast Asia Treaty Organization is formed by the U.S., Great Britain, Australia, New Zealand, France, the Philippines, Pakistan, and Thailand, creating a mutual defense pact.
In 1954, Ray Kroc founds the idea for the McDonald's corporation, agreeing to franchise the idea of Dick and Mac McDonald, who had started the first McDonald's restaurant in 1940 and had eight restaurants by 1954. Kroc would incorporate the entity on March 2, 1955 and open his first franchise on April 15 in Des Plaines, Illinois. He would buy out the McDonald's brothers in 1961.

May 31, 1955 - The Supreme Court of the United States orders that all public schools be integrated with deliberate speed.
July 17, 1955 - Disneyland, the brainchild of Walt Disney, whose fatherhad worked at previous world's fairs and inspired his son to build the iconic Magic Castle and other exhibits opens in Anaheim, California, with the backing of the new television network, ABC. Disneyland California remains today as one of the greatest theme park capitals of the world and some say is second only to his second park built some years later on the other side of the country, Disney World Florida. Disney World was additionally inspired by the subsequent New York World's Fair of 1964-5, with the original intention by Walt Disney to build the second park on the Flushing Meadows site of that event.
December 1, 1955 - Rosa Parks, an African American seamstress, refuses to give up her seat on the bus to a white man, prompting a boycott that would lead to the declaration that bus segregation laws were unconstitutional by a federal court.

December 5, 1955 - The two largest American labor unions, the American Federation of Labor and the Congress of Industrial Organizations, merge to form the AFL-CIO, boasting membership of fifteen million.

March 12, 1956 - Congressmen from Southern states call for massive resistance, the Southern Manifesto, to the Supreme Court ruling on desegregation.

June 29, 1956 - Interstate highway system begins with the signing of the Federal-Aid Highway Act.

October 8, 1956 - Don Larsen pitches the first no-hitter, a perfect game, in post-season baseball history when his New York Yankees best the Brooklyn Dodgers in the 5th game of the 1956 World Series.
November 6, 1956 - A repeat challenge in the presidential election between Eisenhower and Stevenson gains a similar outcome, with easy victory for the incumbent president by a 457 to 73 margin in the Electoral College vote.

January 20, 1957 - President Dwight D. Eisenhower is inaugurated for his second term in office.

December 6, 1957 - The first attempt by the United States to launch a satellite into space fails when it explodes on the launchpad.

November 1957 - Gordon Gould, an American physicist, invents the laser, It would take him until 1977 to win a protracted legal battle over patent rights, and he did not start receiving royalties on his work until 1988. Gould was elected to the National Inventors Hall of Fame in 1991.

January 31, 1958 - Explorer I, the first U.S. space satellite, is launched by the Army at Cape Canaveral. It would discover the Van Allen radiation belt.
April 17, 1958 - The first major world's fair since the end of World War II opens in Brussels, Belgium and evokes a Cold War debate between the pavilions of the Soviet Union and the United States. Their competing visions of the world vie for the attention of the over 41 million visitors to the event, also noted for the Atomium atom molecular structure that stood as the fair's theme. The expo, sanctioned by the Bureau of International Exhibitions, closed on October 19, 1958.
July 8, 1958 - The Lituya Bay, Alaska earthquake registers 7.5 on the Richter scale, producing a landslide that caused a megatsunami with a 520 meter high wave. Only two people were killed in the incident, due to the desolate nature of the area involved. The wave dissipated when reaching the open sea.
October 1, 1958 - NASA, the National Aeronautics and Space Administration, begins operations as a civilian agency of the federal government dedicated to space science, replacing the National Advisory Committee for Aeronautics.
December 10, 1958 - Jet airline passenger service is inaugurated in the United States by National Airlines with a flight between New York City and Miami, Florida.

January 3, 1959 - Alaska is admitted to the United States as the 49th state to be followed on August 21 by Hawaii.
January 7, 1959 - The United States recognizes the new Cuban government under rebel leader Fidel Castro. Castro becomes the Premier of Cuba on February 16.

April 25, 1959 - The St. Lawrence Seaway is opened along the Canada and United States borders, allowing increased ship traffic between the Atlantic Ocean and the Great Lakes.

September 26, 1959 - President Dwight D. Eisenhower hosts Soviet premier Nikita Khrushchev at his farm in Gettysburg, Pennsylvania during the first visit of any Soviet Union leader to the United States. 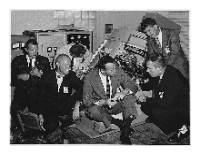 Astronaut John Glenn and others around capsule, October 1958. Photo: NASA