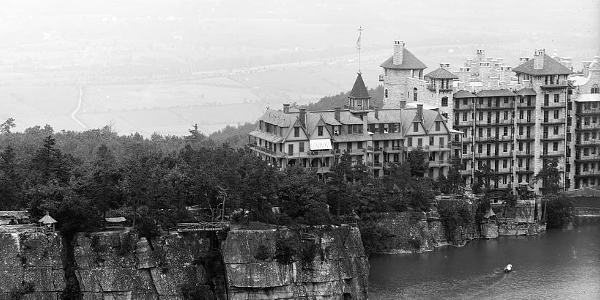 Only ninety miles north of the hustle and bustle of the metropolis of New York sits a Victorian resort that boggles the modern mind. Reminiscent of the San Diego gem Hotel del Coronado, but with a lake south of the Catskills not a beach leading to the Pacific Ocean, Mohonk Mountain House has been accepting visitors since 1869 when the Smiley family saw the potential of the cliffs above Mohonk Lake as a respite from the vagaries of pre-1900 life. Today, you can still stay in those rooms, walk the trails in the surrounding thousands of acres that rise above and below it, and ply the waters of the lake. You might even sing to a loved one on a rowboat. Good voice optional, parasaul recommended. Photo above: Mohonk Mountain House, Northeast View, 1979, Jack E. Boucher, Historic American Buildings Survey. Courtesy Library of Congress. 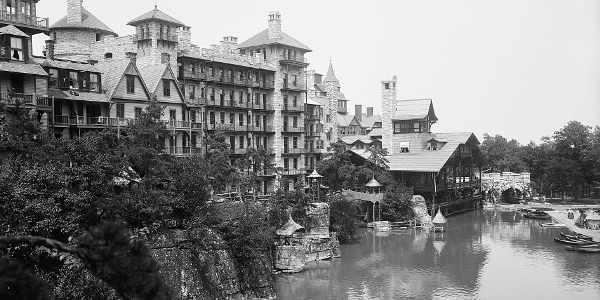 This year, it's the 150th Anniversary of Mohonk Mountain House, one hundred and fifty years since Albert and Alfred Smiley, Quakers by religion, bought a small ten room inn named Stokes Tavern on the lake and three hundred acres in the Hudson Valley for under $30,000. It's grown significantly since then and been visited by five presidents (Theodore Roosevelt to Bill Clinton), hosted Native American conferences as well as Conferences on International Arbitration, and now has two hundred and fifty-nine rooms on over one thousand acres. Yes, the rooms are expensive, ... really expensive. Acreage, including the next door Mohonk Preserve, less so, but still a bit recreation pricey.

The hotel is now run by fourth and fifth generation Smileys since their opening for forty guests in June of 1870. The Mohonk Preserve is now part of a trust to permanantly protect the trails and viewsheds surrounding it. Even if you don't want to stay here, there are day fees for all those trails to walk and vistas to peruse. 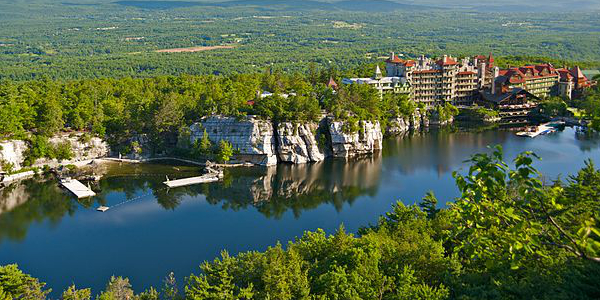 Mohonk Mountain House is located in New Paltz, New York, in the Shawungunk Mountains. Somewhat over two hours from New York City up Interstate 87 and 287. From New Paltz itself, it's Route 299, Main Street, west to Springfield Road, then Mountain Rest Road, which morphs into Mohonk Road. Look for signs from here for both Mohonk Mountain House and the Mohonk Preserve.

Yikes!! Accommodations start at $765 per night.

Day Pass for the Mohonk Mountain House and its activities cost from $22-27 for a hiking pass, and other charges for horse back riding, golf, or tennis. Beach swimming and pool only for overnight guests. You can eat here without staying, but reservations are required.

The Mohonk Preserve Visitor Center is free to visit for all, but the grounds are only free for members. Costs for others for a day pass are $15 and up, depending on your activity.

For those who want to see the resort, but are a bit aghast at those prices for a hike, the Minnewaska State Park Preserve may be a better alternative. It has a $10 per vehicle fee as of 2019.

You're in an area of New York with much recreation and history. From Coopertown to the history of the Erie Canal, as well as the American Revolution and the French and Indian War.

Mountain House began hosting International Conferences on International Arbitration in June 1895. These continued until 1916, and are credited with the initiation for construction and operation of the Permanent Court of Arbitration in the Hague. The first conference included fifty invited participants; later years the conferences rose to three hundred leaders in government and business. 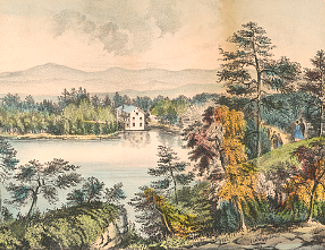 The lower auspices of the Hudson River Valley was inhabited by the Lenape Indians. With European exploration by Cabot, Verrazzano, and Hudson, and establishment of New York City, the area north of the city into the Hudson River Valley and areas such as the Mohonk Lake region became agricultural hubs, albeit with smaller farms to the west of the Hudson, and large manors to the east. These farms were known for the production of grain, which was transported back to New York City for export to Great Britain.

Tourism started to become a major industry of the region as early as 1810, with smaller resorts such as the Stokes Tavern popping up all along the lakes, rivers, and byways.

Photo above: Lithograph of Lake Mohonk and the Stokes Tavern, Circa 1856-1907, Currier and Ives. Courtesy Library of Congress. 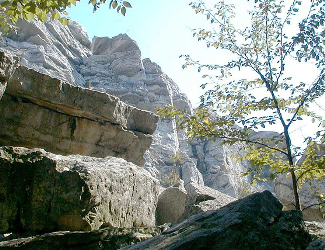 From the inception of the Smiley era of Mountain House, the family began to acquire acreage surrounding the hotel to preserve the vistas from development and expanded amenities for their guests. Since 1963, most of that acreage is now held in the trust of the Mohonk Preserve, which includes eight thousand pristine acres of New York wilderness, lookouts, and trails. How many trails? With adjoining state lands, up to eighty-five miles. Beyond hiking, the preserve is a destination point for rock climbers. If that's your passion and you are experienced enough to climb safely, you'll join the thirty thousand climbers who visit each year. There is a day fee for hiking, climbing, and cycling at the preserve.

Since 1986, both the Mohonk Preserve and Mohonk Mountain House have been designated National Historic Landmarks.

South of the Mohonk Preserve on lands of another Smiley family member is Minnewaska State Park Preserve. The land here included the Minnewaska Mountain House (no longer in operation), and now has twenty-two thousand acres to explore under the auspices of the New York State Office of Parks since 1987. Photo above: Rock formation Bonitou Crag in the Shawangunks of the Mohonk Preserve. Courtesy Wikipedia Commons.