November 5, 1895 - The first United States patent for the automobile, #549160, is granted to George B. Selden for his two stroke automobile engine. 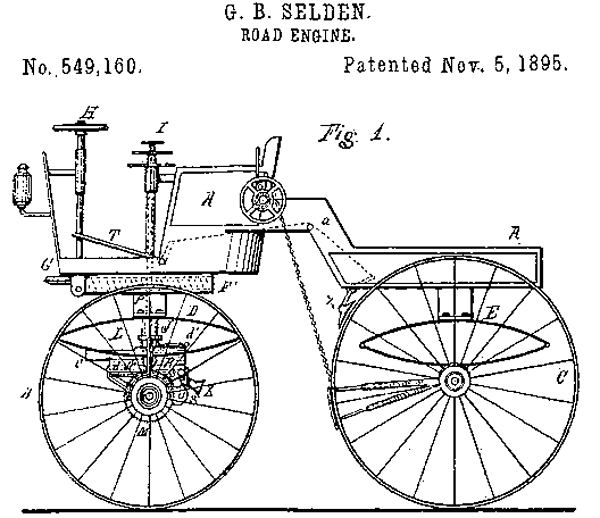 George B. Selden was a patent attorney who never built a car. He received his patent for an updated version liquid-hydrocarbon compression engine, essentially the four wheeled car, that he had completed in 1878, eight years before the Benz auto was introduced as the first car in 1886. The patent process was lengthy, in many ways slow on purpose due to changes Selden made, knowing that the patent only had a length of seventeen years after approval and that the auto industry was a small identity, nascent at the time of his initial application and would be more profitable as the industry grew. The application process started on May 8, 1879, and took over sixteen years.

The engine was based on the Drayton Engine displayed at the Centennial International Exhibition in Philadelphia 1876. It was a lighter version, one cylinder, weighed four hundred pounds, and had an enclosed crankshaft. Selden sold his rights in 1899 to the Electric Vehicle Company. Although he never built the car prior to claiming its patent vialbe, his patent was still very valuable. Selden and the company used the patent to sue, at first the Winton Motor Carriage Company, the largest auto marker in the nation, for building a gas powered car. The case was settled and the patent rights upheld in 1903. Selden and his collective sued anyone who tried to build a vehicle without their patent approval and licensing fee, forming a collective of manufacturers to protect the patent called the Association of Licensed Automobile Manufacturers in 1903. The ALAM included manufacturers such as Winton, Packard, and Cadillac. Henry Ford tried to join the association, but was refused, then taken to court by the collective for patent breach. Ford lost the initial case, but asked for an appeal. Ford won the appeal on January 10, 1911, stating that his engine was not based on the engine that Selden stated, but another, a German four-cycle engine called the Otto. One year later, Selden's patent expired.

George Brayton first displayed his constant pressure, cylinder based engine in 1873, with the Pennsylvania Ready Motor Company showing his wares in Machinery Hall of the Centennial Exhibition besides other inventions of the time; the Corliss Engine, which powered the other machines of the building; the Bell's telephone, Edison's phonograph, the McCormick reaper, Colt's repeating pistol, Otis' elevator, and more.

What was the Patent Worth?

Members of the Association of Licensed Automobile Manufacturers (ALAM) agreed to pay 1.25% royalty (0.5% to the Electric Vehicle Company, 0.5% to the ALAM, and 0.25% to Selden.) This fee was paid by 87% of all car manufacturers at the time on 90% of all manufactured cars. It is said that $2,000,000 in royalties were collected.

Did Selden Ever Build a Car?

Actually yes. During the case against Ford, Selden thought it prudent to build a prototype using the original drawing, actually two, and tested one on the streets of New York in September 1907. It did not work particularly well.

The Selden Car Company would actually manufacture cars for three years from 1909-1912, then turn to the production of trucks.