April 15, 1897 - Oil is discovered in Indian territory for the first time on land leased from the Osage tribe, leading to rapid population growth near Bartlesville, Oklahoma. 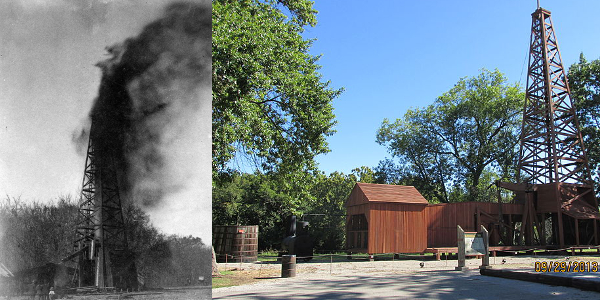 The territory had been in constant flux since the Homestead Act of 1862, withstanding four land rushes that had populated towns such as Guthrie and Oklahoma City with settlers. Add that to the influx of Indian tribes now pushed west by the Indian Removal Act which led to the Trail of Tears into nearby territory with other midwestern tribes, and, at least for some, the last thing they needed was additional pressure for new settlement. However, that's just what occurred when the Osage Tribe, a traditional midwestern nation that had emigrated from their original home in Ohio after conflicts with the Iroquois in the 17th century, was part of the Indian Territory plan to lease some of their land to oil speculators.

Speculation in the oil industry had become rampant after finds in Titusville, Pennsylvania in 1859 led to additional fields in the Appalachian Basin. John D. Rockefeller's Standard Oil, founded in 1870, had become the largest oil refiner in the world two decades before, and the insatiable appetite for the new fuel continued to grow. On November 28, 1892, the first major well of the plains was found, Norman No. 1, near Neodesha, Kansas. Two years later, the first significant find occurred in Texas, at Corsicanna.

Bartlesville had been founded in 1874 by Jacob Bartles, son-in-law to Chief Charles Journeycake of the Delaware Indians (Lenape) of Pennsylvania. Originally from Kansas, Bartles had moved to the area one year earlier, and now established a trading post, post office, and eventually a grist mill. The town grew slowly, with new settlers and the establishment of general stores, a livery, blacksmith shop, and a rooming house over the next two decades. In 1895, a newspaper arrived known as the Weekly Magnet. In January of 1897, the town became incorporated within Indian Territory. Indian Territory in Oklahoma was home to the Five Civilized Tribes moved west from the southeast (Choctaw, Cherokee, Seminole, Creek, and Chickasaw), as well as the other tribes of the region (Osage, Pawnee, Delaware, Seneca, Shawnee, and others).

George B. Keeler and William Johnstone, adopted into the Indian nations of the Osage (Keeler) and Delaware (Johnstone) after marriage to women from the tribes, leased two hundred thousand acres from the Cherokee with their wives and partners Frank Overlees and John F. Overfield. They had been prompted by the finding of several smaller oil finds in the Territory. The partners contracted with the Cudahy Oil Company to drill into an oil seep in Bartlesville near the Caney River. The operation began in January 1897. After drilling one thousand three hundred and twenty feet, on April 15, 1897, at three p.m., a gusher sprouted. There were fifty spectactors. The well, named Nellie Johnstone #1 after Johnstone's six year old daughter, produced fifty to seventy-five barrels per day for two years, before it was capped, as the area waited for transportation to distant markets. In 1900, the Kansas, Oklahoma Central and Southwestern Railway came to Bartlesville, and the well was uncapped, with oil now selling for $1.25 per barrel. It would produce oil for more than sixty years.

There are some sources that state the actual gushing of the oil occurred on March 25, 1897, and that the well was completed on the April 15, 1897 date.

At the time of its first gush, the town of Bartlesville had two hundred people. By 1900, it was home to six hundred and ninety-eight. By 1910, the population was six thousand one hundred and eight-one. Although the initial Nellie Johnstone well would have an impact on its future, perhaps the larger impact of the oil industry on the town occurred in 1905 when Frank Phillips, founder of Phillips Petroleum, and brother L.E. Phillips plus other partners began plying their trade in the fields around Bartlesville, Oklahoma, spurred by the Nellie Johnstone. They struck oil on June 23, 1905 with Holland #1, but struck it rich with the Anna Anderson on September 6, 1905, a gusher, the first of eighty straight successful wells for Phillips. By 1917, Phillips Petroleum had assets of $37 million. By 1920, the population of Bartlesville had exploded to fourteen thousand four hundred and seventeen. Oklahoma's oil production would increase from one thousand barrels per year to forty-three million.

The Phillips brothers were not the only famous oil men brought into the Oklahoma fields by the Bartlesville strike. George and J. Paul Getty (Getty Petroleum) and Harry Sinclair (Sinclair Oil) are two noteworthy additional entrepreneurs who helped establish the state in the oil industry.

The Nellie Johnstone #1 well continued to produce oil until 1963, a total of one hundred thousand barrels during its productive years. A replica drilling rig was built over the well in 1948, and rebuilt in 2008. It still remains in what is known as Johnstone Park, establshed 1903, today. The town is now home to over thirty-five thousand and includes two three history museums. Two, the Frank Phillips Historic Home and Phillips Petroleum Company Museum, located within the city, and ten miles outside town, the Frank Phillips Ranch, the retreat known as Woolaroc, established in 1925-1929 on three thousand seven hundred acres, can also be visited. 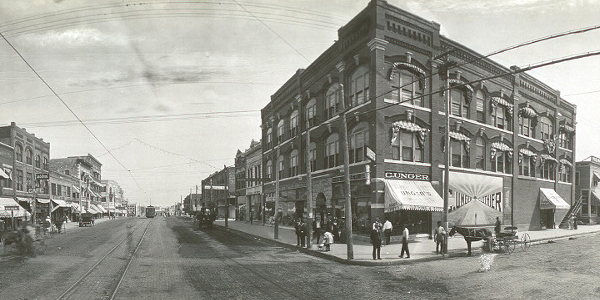